What is the WORST Stihl chainsaw?

Because some Stihl saws get A LOT more negative feedback than others.

To find out, I decided to run a poll in the 100,000+ member Stihl Facebook Group. And, I received a good amount of feedback.

At the time of writing, there were more than 300 votes, and they’re still coming in.

The poll has been up for 3 days and the winner for the #1 WORST Stihl chainsaw is… the Stihl MS391 with 29% of all votes.

Let’s dig into all the results! 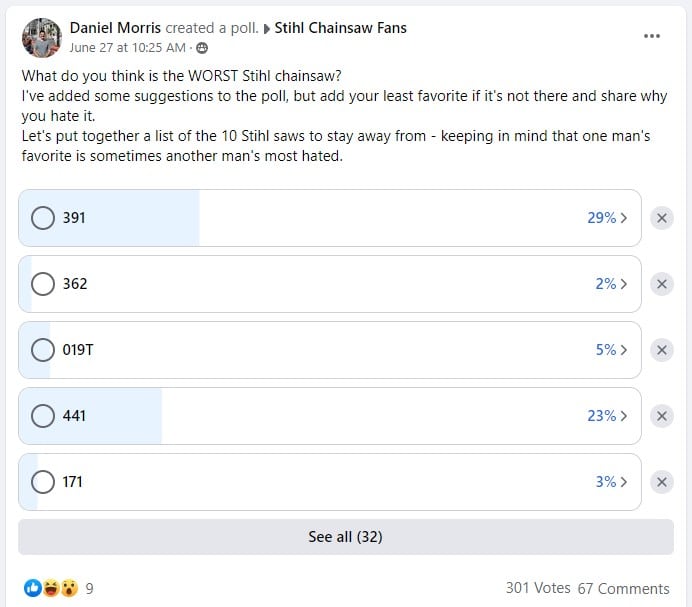 This is the question I asked the group.

What do you think is the WORST Stihl chainsaw?

I’ve added some suggestions to the poll, but add your least favorite if it’s not there and share why you hate it.

Let’s put together a list of the 10 Stihl saws to stay away from – keeping in mind that one man’s favorite is sometimes another man’s most hated.

Respondents were only allowed a single vote and could add their own ‘worst Stihl chainsaw’ to the list.

Some of the additional ‘worst chainsaw’ suggestions were either a joke (like whoever added the 200T – one of the most popular Stihl saws), or they didn’t specify a single saw.

Someone also added ‘All of them’ as an option – probably a battery chainsaw man.

While votes are still coming in, here’s where they stand after 3 days.

Those are the 10 worst Stihl Chainsaws, and here are some of the reasons why.

Stated prices in $USD: they vary from state to state, country to country, and depend on model designations/features.

The Stihl MS391 takes the prize as the worst Stihl chainsaw.

Someone asked in the comments, ‘Can someone explain the hate for the 391?’

Problems with the 391 include:

And David summed it up nicely:

Not heavily used, only domestic, terrible starting issues, and its as heavy as an anvil with a lump of lead strapped to it.

Someone else, who uses the 391 for up to 20 cords of firewood per year said the reason for the hate was because it’s too cheap and simply lacking the prestige of a pro-saw.

I liked this comment, which was referring to both the 391 and the 291:

Stihl should send apology letters to anyone that has ever bought or ran one.

The consensus was that it’s just too heavy for the power it gives.

While not everyone agrees, apparently the forest service, who obviously buys a lot of saws, won’t touch them.

Problems with the 441 include:

If you’re thinking about picking up a 441, you might be better off looking into a 440 (which my neighbor loves) and which was brought back for a short time because the 441 was so unpopular.

The earlier Stihl 040 is also another popular 70 cc saw.

I definitely don’t think they were the worst. It’s just that so many felt terribly let down thinking the 441 was going to be a great upgrade from their 044/440’s.

Used one for 8 years straight and not a single problem until about a year ago when it was dropped and cracked the fuel tank.

If you know what you’re doing it might be right for you, but if a problematic saw isn’t something you can deal with, it’s probably best to leave it. 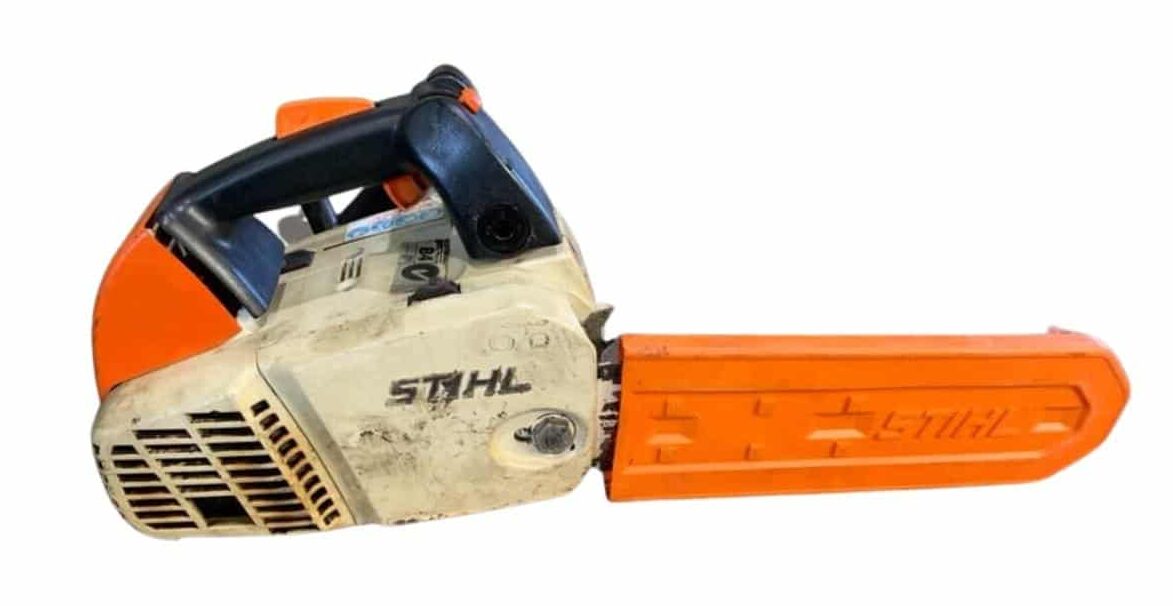 The Stihl 019 T is another very unpopular chainsaw that has been described as ‘Stihl’s most problematic saw.’

It received 5% or 18 votes for the worst Stihl saw and certainly does not get the love the 200T does.

Problems with the 019T include:

The main complaint is the fact that it has more problems than the average saw and then can take a long time to repair. 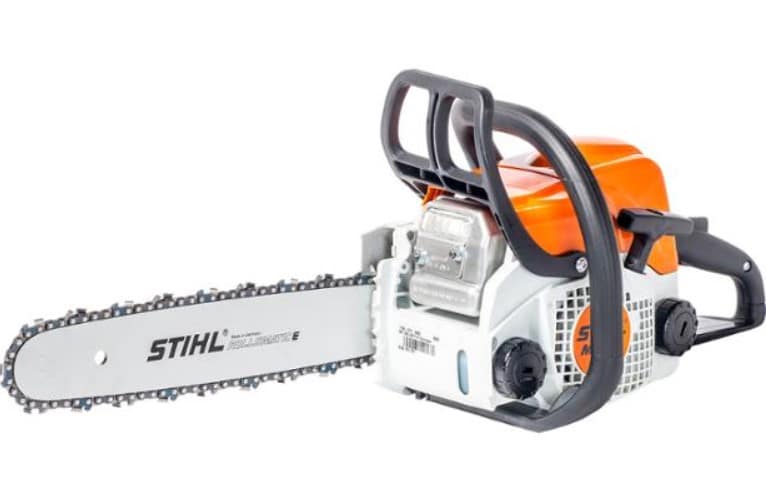 Along with the MS 180, the MS 170 is another of the most hated Stihl Chainsaws.

The 170 is the cheapest and least powerful Stihl Chainsaws, so it’s no surprise it’s made the list. Any cheaply made saw isn’t going to make the list of the best chainsaws, at least.

The problem with the 170 may simply be that people use it for jobs that it’s not big enough for – it doesn’t have the power to do much more than pruning or cutting up branches.

Folk who are used to running any other Stihl saw will find it hard to downgrade to such a low-powered saw, which is perhaps where some of the hate comes from. 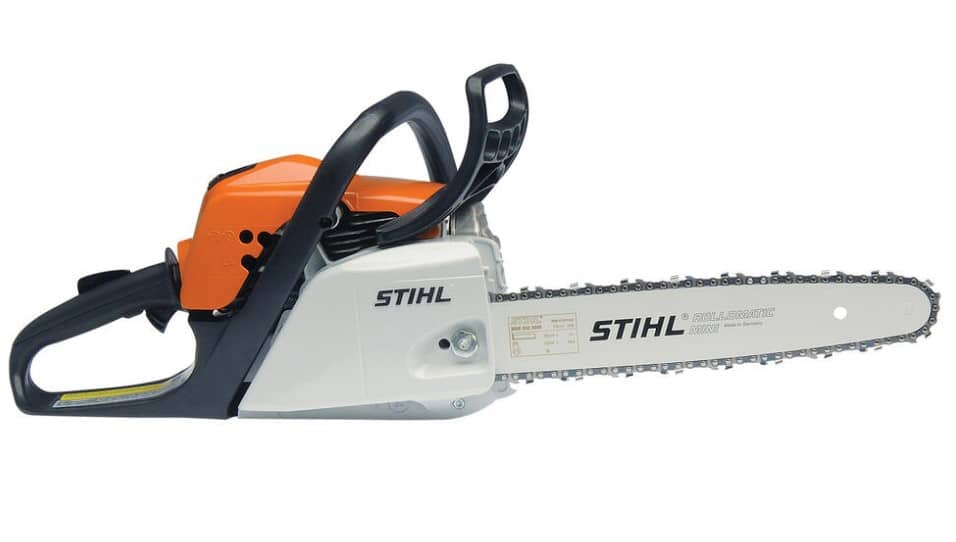 Some differences between the two:

But there are many other differences as well – they are quite different saws despite being similarly powered.

Many people have the philosophy that any Stihl model ending with a 1 sucks. These models make up 50% of this list.

Let’s just say that the 171, at least, is not the best saw for cutting down trees – you’d almost be better off with a good felling axe.

To be fair, you would be able to find 9 people who have had bad experiences with any Stihl saw, but nevertheless, it got more than the others.

Literally every single 362 I have seen in person has had major problems.

While someone else stated:

I’ve ran mine for 15 years with nary an issue. Still has original spark plug. Best saw I have ever had and absolutely my go to.

Problems and complaints with the MS 362:

But overall, the 362 actually gets really good reviews.

Most people are happy with the saw so I wouldn’t be afraid to pick one up for the right price.

The 500i is a controversial chainsaw – you either love it or you hate it.

Third 500i in my shop right now blown up. Never seen pistons and cylinders galled up and as dry as these.

It’s Stihl’s first fuel-injected chainsaw, so it is discriminated against a bit for this.

Many would recommend the MS 661 or other professional Stihl saws over the MS 500i simply because the latter is, at this stage, unproven for the long haul.

Early indications suggest it’s not as long-lasting as one would hope.

I have a tree service and use saws daily and climb with them. Had a 500 for two years now that gets lots of use.

That was in response to someone who said the 500i is ‘hands down the worst’ Stihl chainsaw.

The 311 received 6 votes as the most hated Stihl Chainsaw.

Some of the problems have been summed up by Corey:

They come borderline lean usually. They are also known for the PTO side crank seal going out and the transfer caps coming loose – both causing air leaks and scored pistons.

Unless you only cut soft wood I would stay with a 20” bar. I see a lot of them with melted cases and burnt clutches from guys running them hard with longer bars.

Carb problems occur with some units and can involve a few trips to the dealer’s store for tweaking, maintenance, or repairs.

The 311 is part of Stihl’s Farm Boss series – a line of higher-powered homeowner chainsaws. Its Husqvarna equivalent would be the 460 Rancher.

I have a farmer friend who has the Stihl MS 310 (among a dozen other saws), and he doesn’t mind it at all.

The Stihl MS 261 is considered by many to be a really good all-rounder, but it’s made it onto the list with 3 votes.

It’s one of the cheaper/entry-level Pro saws (rather than homeowner), and it seems that it’s the M-Tronic model that gives the most trouble.

Stihl decribes the M-Tronic feature as:

No matter if you’re just starting up, working away, or restarting your chain saw after a break, M-Tronic takes perfect control of ignition timing and fuel dosage whatever the operating status, and with electronic precision.

It can take a while to work the bugs out of these new and innovative features, and that could be the problem. Also, it just takes users time to adapt to new saws and find the best way of working with them.

Perhaps this should have been a ‘5 worst Stihl Saws’ post rather than 10. It may just be that they’ve only made a handful of bad chainsaws.

The 270 is another Farm Boss (or Wood Boss depending on where you are) so it’s a top-end homeowner saw.

The main complaints against the saw are that it’s difficult to find parts for and that it can play up a bit more than other saws.

As with the other saws down the bottom of this list, I wouldn’t let their inclusion put you off if you’re looking to buy. The majority of comments on the 270 are that it is a decent saw. 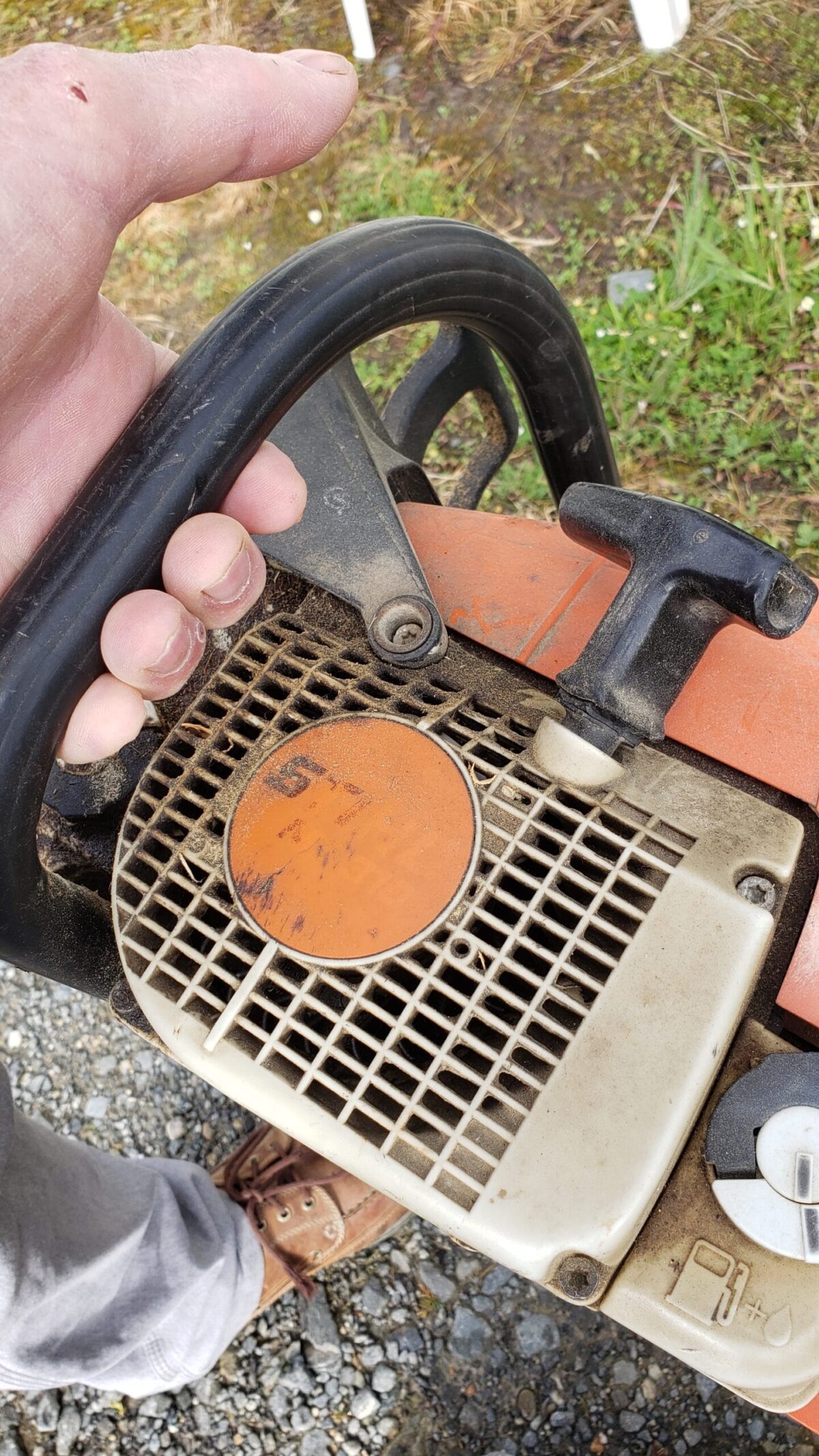 There were a few other chainsaws that were added to the list but which didn’t make the top 10.

But all of these only received a single vote from the person adding it to the poll.

I think we can assume they had a bad experience with their saw and now hold a personal grudge against it.

The Stihl HT133, a pole saw, also got added to the pole, along with the ECHO CS 590 Timber Wolf (for some reason).

I wouldn’t let the addition of any of these saws to the ‘worst chainsaw’ poll put you off! 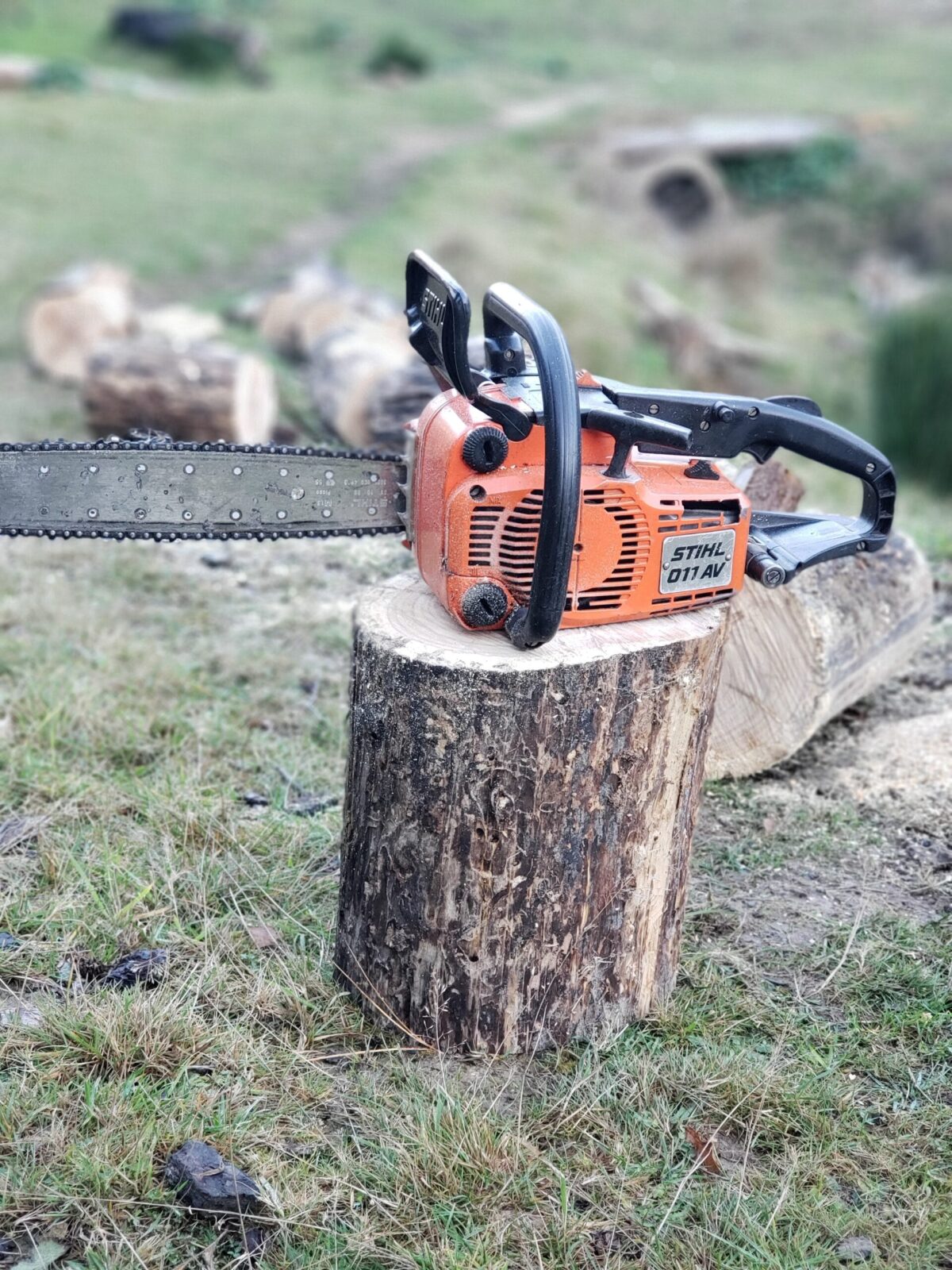 All brands have their hits and misses, and the Stihl company is no different – there are some bad Stihl Chainsaws out there.

As you would expect, there have even been Stihl saws so bad that they didn’t even make it out of development and into production.

However, for the most part, Stihl saws are the best.

Join the Stihl Chainsaw Fans group here if you have any questions that you want to be answered by the experts, or leave a comment down below.

You can find many more Stihl Chainsaw reviews link to in my Stihl production years post.

You might also be interested in checking out this little Stihl 011 from the 80s that I picked up recently.