Stihl designed the MS500i chainsaw with professionals in the forestry and tree service industries in mind.

Weighing in at under 14 pounds and with a displacement of 79.2 cc’s, it has the power-to-weight ratio people who work long hours felling trees or bucking firewood need.

It’s well-regarded by the Stihl community for its reliability, ease of use, ease of maintenance, and power, but is it the right choice for you?

Here’s what you need to know about the Stihl MS500i to help you decide. 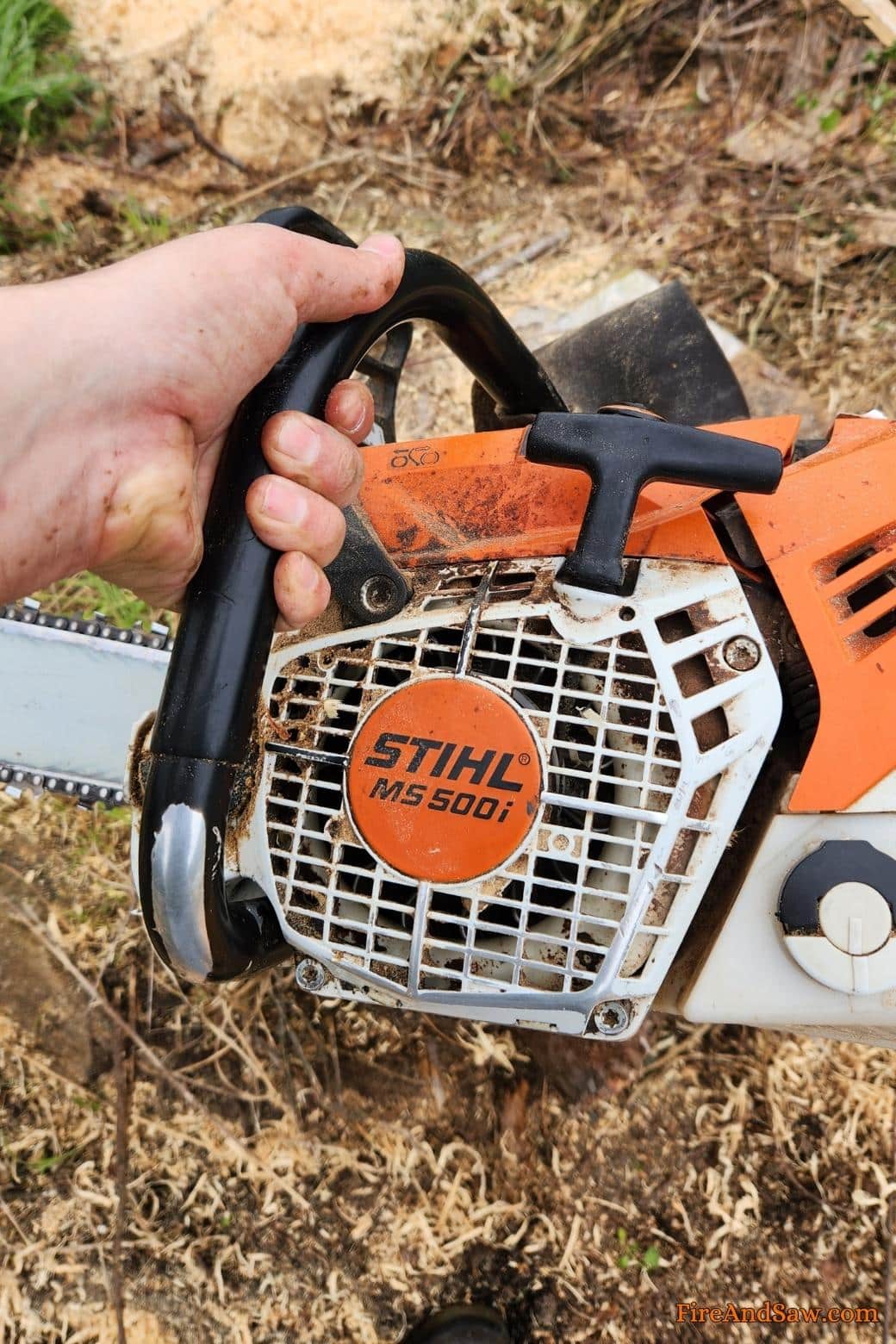 The 500i featured throughout this post belongs to Jimbob – he’s a New Zealand based tree worker that I spoke with recently.

He uses this saw for dropping trees and processing firewood. He’s worked with a ton of other Stihls saws while logging, and really likes the 500i for what it is. He said that compared to the MS661, at least, it’s a million times better.

As I’ve already said, the saw is really lightweight. It’s not a small saw; it looks like it will weigh a ton, but when you pick it up it’s surprisingly light.

At this stage there are two versions:

But more versions will arise in the future, no doubt.

Before you purchase a Stihl MS500i, there are several things to consider. Chief among them is the list of problems other users have encountered with their Stihl MS500i.

It’s been on the market since 2019, so there’s been plenty of time for criticisms to emerge. Overall though, they haven’t.

Issues are few and far between, with the most common limited to:

The vast majority of people who have used the Stihl MS500i don’t have anything negative to say, which is impressive from a target market of industry professionals who know chainsaws inside and out.

But not everyone agrees, which we’ll get into in the review further below!

Importantly, you need to know the details of how this particular chainsaw works.

This video illustrates how the electronic fuel injection process works. You can also check out the official Stihl 500i promo video on YouTube here.

The MS500i is notable for its unique electronic fuel injection system – it’s the first chainsaw of its kind.

More technology often means more opportunities for something to go wrong, so the innovation left many wondering whether the new saw would work effectively.

These concerns mostly (but not completely) dissipated as soon as reviews and videos about the Stihl MS500i appeared online. The fuel injection was a game-changer for the chainsaw industry.

It allows the saw to start quickly, accelerate rapidly, and removes the need for a choke. As a result, you can get to work faster and more efficiently.

The Stihl 500i chainsaw’s release date in the US was in Spring 2019 (rolled out across the world after that) and it quickly became known as one of the best logging chainsaws. 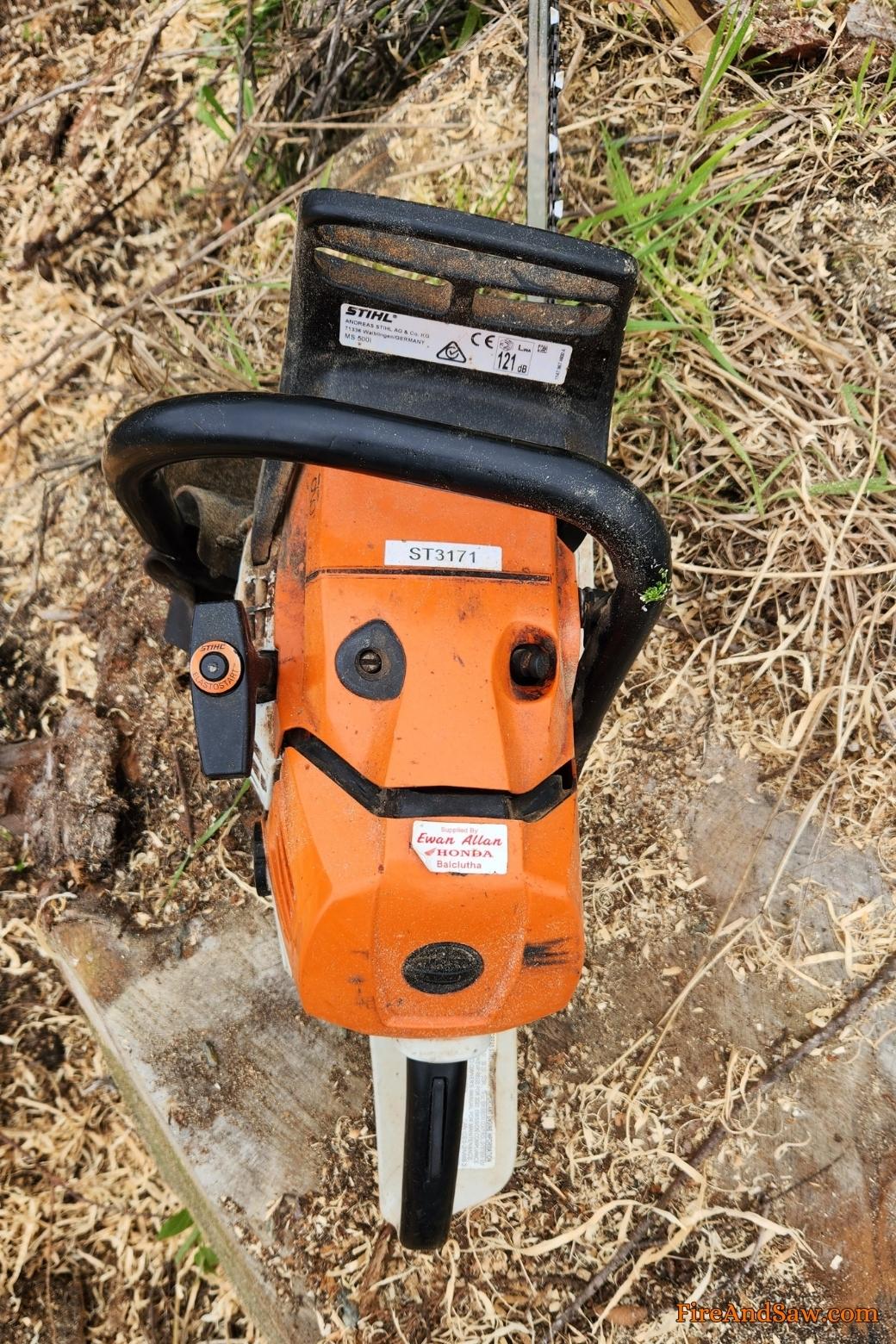 One of the best parts of shopping for a new chainsaw is looking at the specs of what’s on the market.

As you might have guessed from the hype surrounding the MS500i, its specs are pretty impressive.

It’s one of Stihl’s most powerful chainsaws. 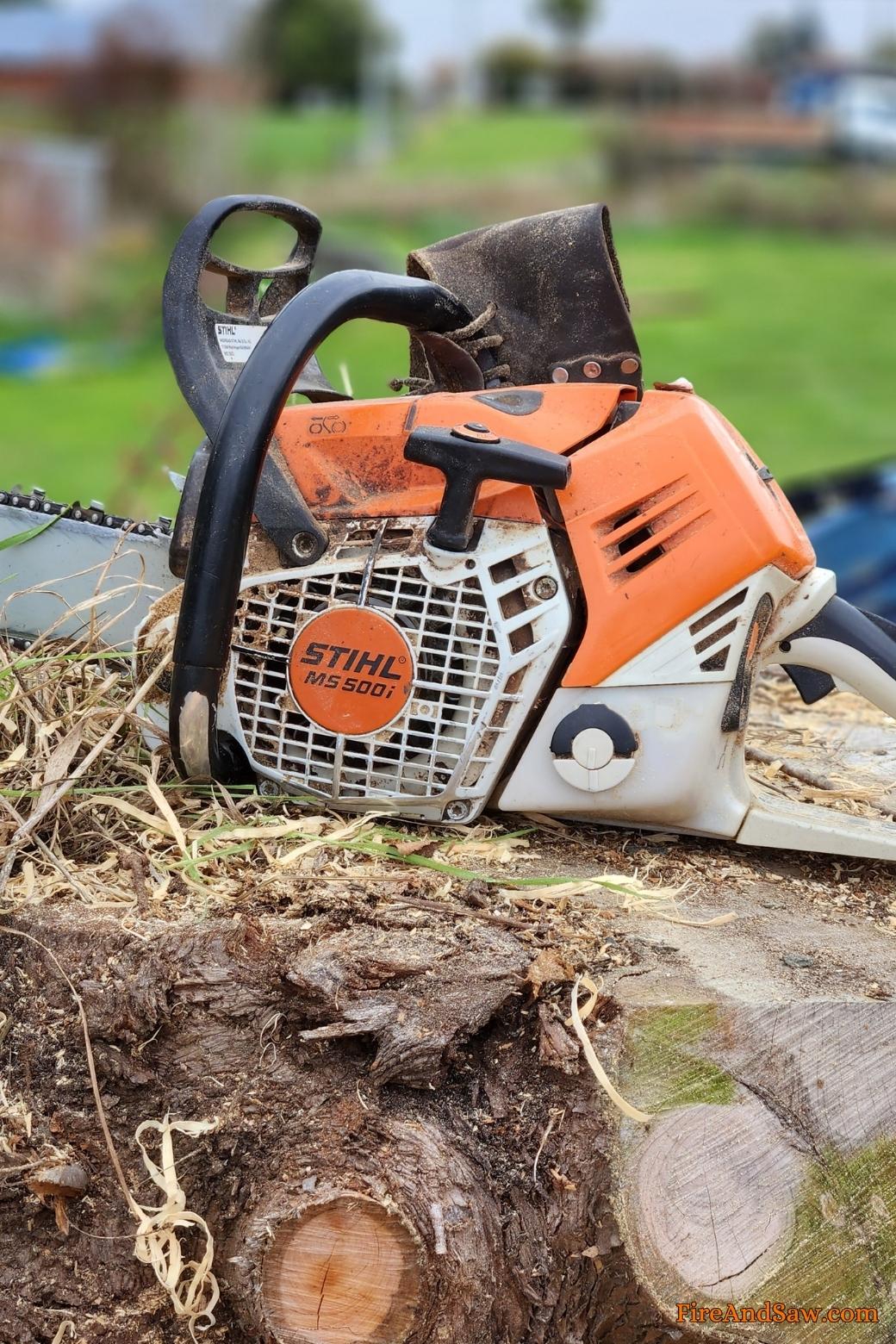 The Stihl MS500i is a powerful, lightweight chainsaw, but those aren’t the only features users love about it.

This chainsaw is best for professionals who spend long hours felling trees, limbing branches, and dealing with the mess. But in saying that, it’s also a great saw for those who aren’t in full-time tree work but who want one of the best saws.

They use a lot of fuel, but if you’re cutting big stuff they’re awesome.

While some people have problems with them, they don’t fail any more often than any other pro-Stihl saw and perform better power-to-weight wise.

Stihl designed it to make the work you do as safe, fast, and easy as possible.

Its power-to-weight ratio is among the best on the market. While it’s on the more expensive side for a chainsaw, if you’re a tree service professional, you’ll recoup your investment with increased productivity.

It’s comparable to Stihl’s 461 and 462 models, but more powerful and efficient. The electronically-controlled fuel injection system puts the MS500i in a class of its own, and we wouldn’t hesitate to recommend it.

If you’re interested in a video review, check out Skogsforum’s test of the MS500i. They had someone use the saw for three months without performing maintenance, and the results are interesting to see.

And there are many glowing reviews, like this one from Donald:

The 500i quickly became the favorite saw of many loggers and other tree workers, but not all of them…

And this was a helpful thread… Eston commented:

EVERYBODY I know that has one or has had one has told me to stay away from it if I was going to have one as a daily user.

That’s because one guy’s saw blew the engine the second day and the other three guys told me they’ve had numerous problems in and out the shop often.

I’ll just stick with the extra weight of the 661c that has not failed me yet, and I run the Hell out of them every day.

And Gary replied back:

I’ve run mine almost daily for well over a year. Flawless. My dealer is also a friend. They go out to loggers and no problems reported yet. So I don’t know who’s doing what buy I’m running my saw hard from freezing cold to over 90 degrees out with zero problems. But, I also maintain my stuff.

Make sure you’re using the gear right and It’ll look after you.

The one factor that might make you balk when looking at the Stihl MS500i is its price, especially if you’re looking for a chainsaw for personal use.

If that’s the case, you’ll likely be better off with a different model the MS461 or MS661 are alternatives that might be suitable (just stay away from the MS441).

No matter what country you are buying in, this is going to be more expensive than the average high-end chainsaw.

Despite the price, if you’re a forester, arborist, logger, tree service professional, or in another field where you spend a lot of your time with a chainsaw in your hand, it might be a worthwhile investment.

If you’re not sold on the MS500i or want to shop around a bit more before making your decision, don’t worry.

There are a few comparable non-Stihl options available, including:

All of the alternatives we listed are designed for the demanding work undertaken by tree service professionals rather than personal use. They’re durable and robust but a bit heavier than Stihl’s MS500i.

These vintage saws are not nearly as comfortable to work with – they’re loud, fuel-hungry, and will vibrate you half to death – but they’re much cheaper (even those in good condition) and can be easier to work on yourself.

I’m sure you still have questions about the MS500i.

These are some of the more common inquiries we see.

This chainsaw has a displacement of 79.2 cc’s.

Satisfied buyers report that it seems to run like a more powerful saw while weighing far less, given its incredible power-to-weight ratio.

After roughly two years on the market, however, there have been no recalls of the 500i.

You’re the only one that can decide for sure that the 500i is worth it.

If you’re a forestry professional of some sort, we think it is, though. Its power, efficiency, and ease of use make it worth the higher-than-average price tag.

It also comes with a three-month warranty for professional use so that you can feel secure in your purchase.

The 462 is marginally lighter, slightly less powerful, a bit cheaper, and lacks the electronically controlled fuel injection system. If you’re debating between the two, we believe the 500i is worth spending a bit more on.

What chain does the MS500i have from the factory?

For reference, if you’re looking for a replacement, that’s part #3624. It’s a 3/8th of an inch chain, and it’s what Stihl recommends to get the best performance from your saw. 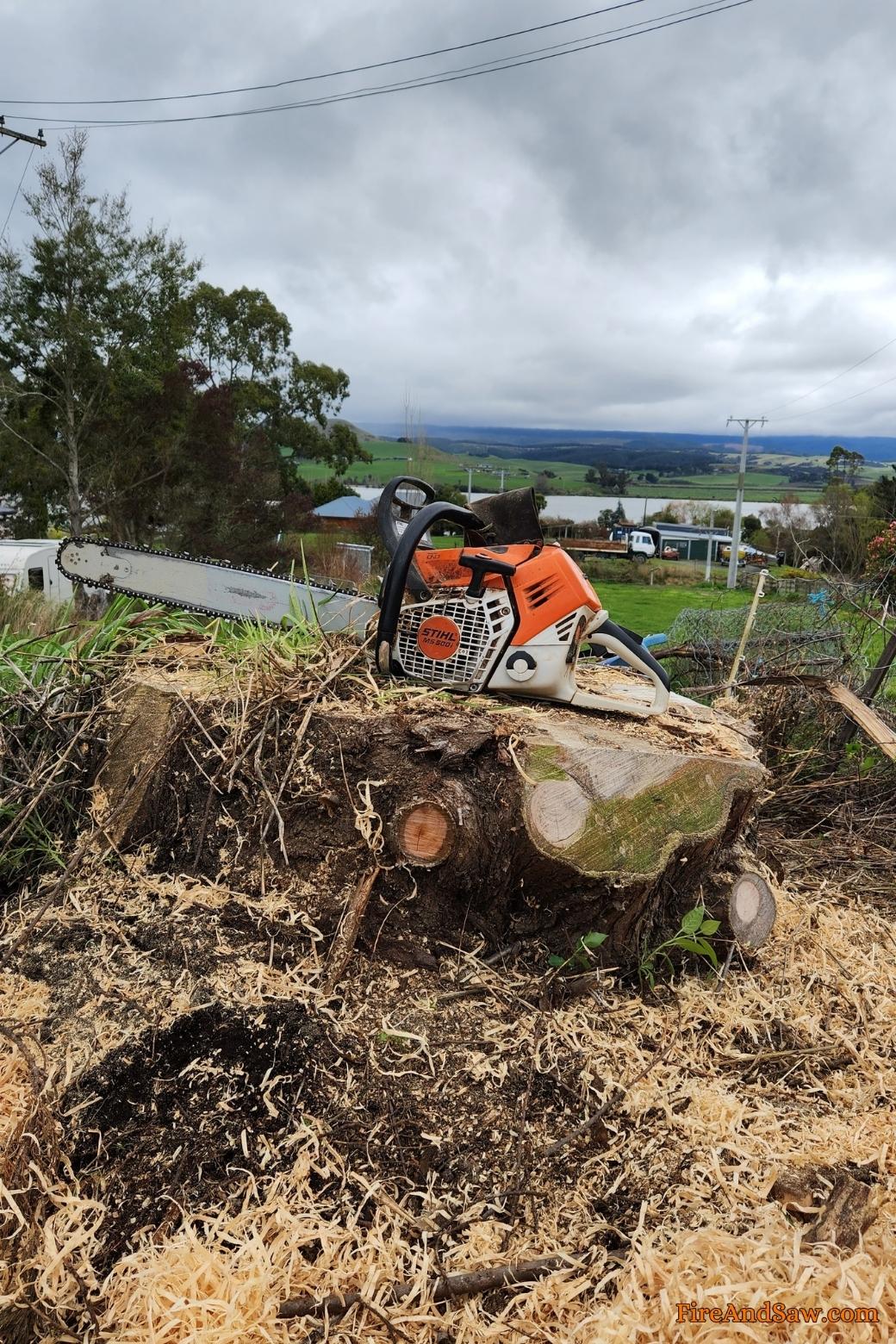 If you’re a forester, arborist, or logger, you need a saw with the power to cut through thick hardwoods.

You also need it to be light enough that you can use it for hours at a time without becoming fatigued. With its power-to-weight ratio, that’s the Stihl MS500i.

It’s not the best saw for around the home or even for occasional use on the farm – find out more about the Stihl MS 261 or the MS 310 for lessor-powered saws.

Fire Pit Lava Rocks: What Are They And Which Type Is Best?