It’s a powerful 70cc saw that features in all of the ‘best Stihl chainsaw’ round-ups.

Even today, it is a sought-after saw that fetches a good price. It is known for being a reliable workhorse in a pro capacity or as a very good heavy-duty firewood saw.

*Used Stihl 044 Chainsaws can be found here on Ebay. 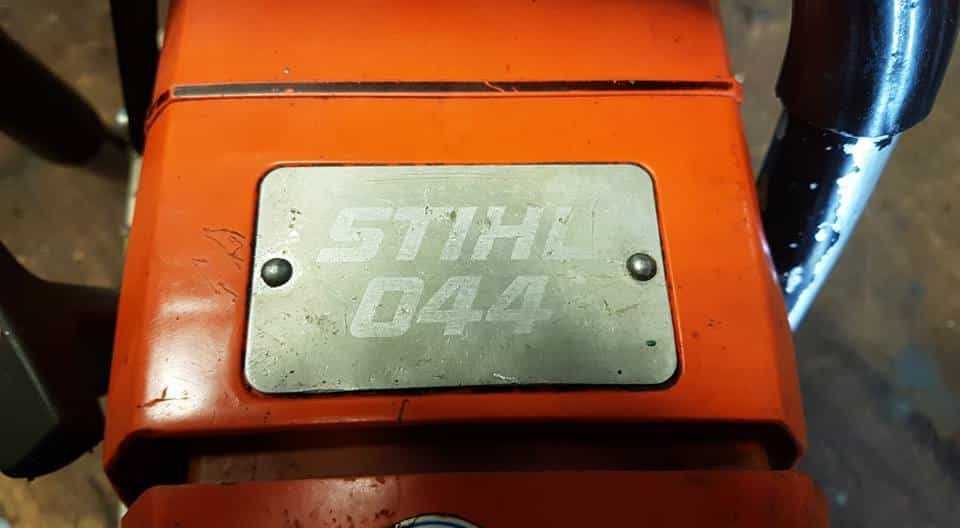 The 044c, which was released in 1989, was the first Stihl Chainsaw with a catalytic converter; a device that limits the hydrocarbons in the exhaust gas by 70 – 80%.

In fact, Stihl was the first company in the world to develop such a device for 2-stroke engines.

Here are some comments from various owners of the 044:

These types of comments are very typical.

It’s certainly one of the top 5 best saws ever made so if you have the opportunity to buy one at a good price, jump on it.

Check out our guide to buying a second-hand chainsaw for a few tips on how to know whether a seller is legit – don’t get scammed! 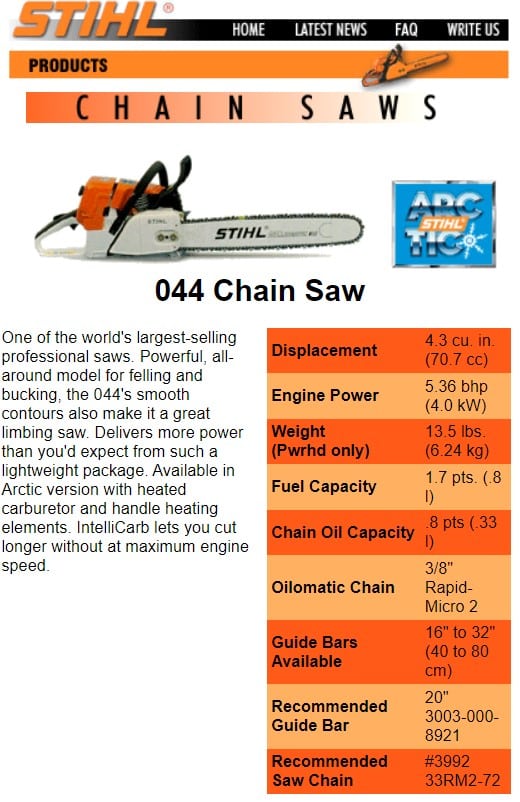 You can see the main specs of the 044 in this chart.

Stihl marketed it as:

One of the world’s largest-selling professional saws. Powerful, all-around model for felling and bucking, the 044’s smooth contours also make it a great limbing saw. Delivers more power than you’d expect from such a lightweight package.

Both the base model 044 and the Magnum can be purchased as an arctic model.

This means it has heated handles and carb for working in low temperatures. It can be switched on and off. This feature increases the weight of the saw by about 0.4 lb.

It’s hard to state what an 044 is worth without seeing the particular model and knowing its history, but saws in good condition can fetch up to $600. Most seem to sell for around the $400 mark. 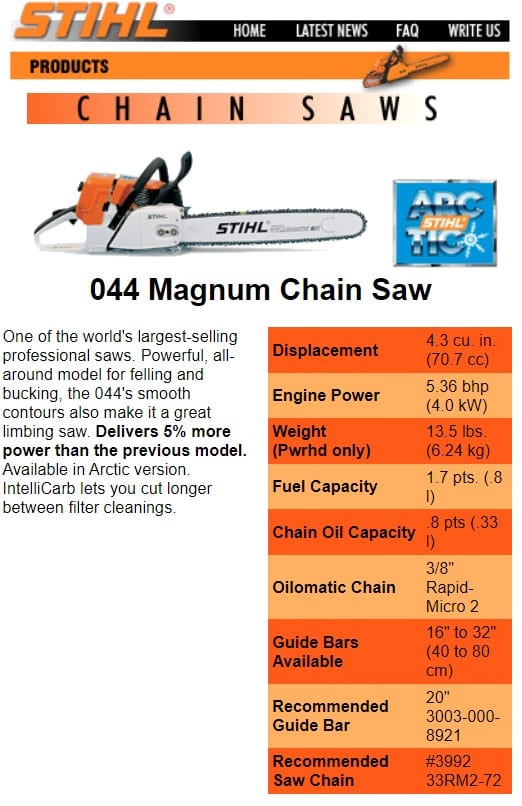 If you compare the specs of the 044 and the o44 Magnum they are identical.

However, the description states:

One of the world’s largest-selling professional saws. Powerful, all-around model for felling and bucking, the 044’s smooth contours also make it a great limbing saw. Delivers 5% more power than the previous model.

It’s hard to find solid info on the actual differences, but there are a few ideas floating about out there.

However, take that with a pince of salt, as there is a lot of of disagreement on the differences, even among Stihl techs and dealers.

There are also those who say it’s just a marketing label. They put a sticker on it and called it a Magnum but it’s identical.

But I don’t buy that.

The big question people want to know is whether or not they have the 10mm or 12mm piston pin model.

That’s because the higher port timing on the 10mm is more desirable, but the smaller combustion chamber is good as well.

The early 10mm saws tended to have a red control lever rather than black, plus they had a larger exhaust opening. Also, the casing behind the muffler was slightly different between the two versions, as illustrated in the picture above.

And as a general rule, a cylinder with slanted fins will be 10mm, while a straight fin cylinder will be 12mm. However, there are exceptions. Some very early 12mm saws had slanted fins. Also, people will put a 10mm cylinder into a 12mm saw which can confuse things. 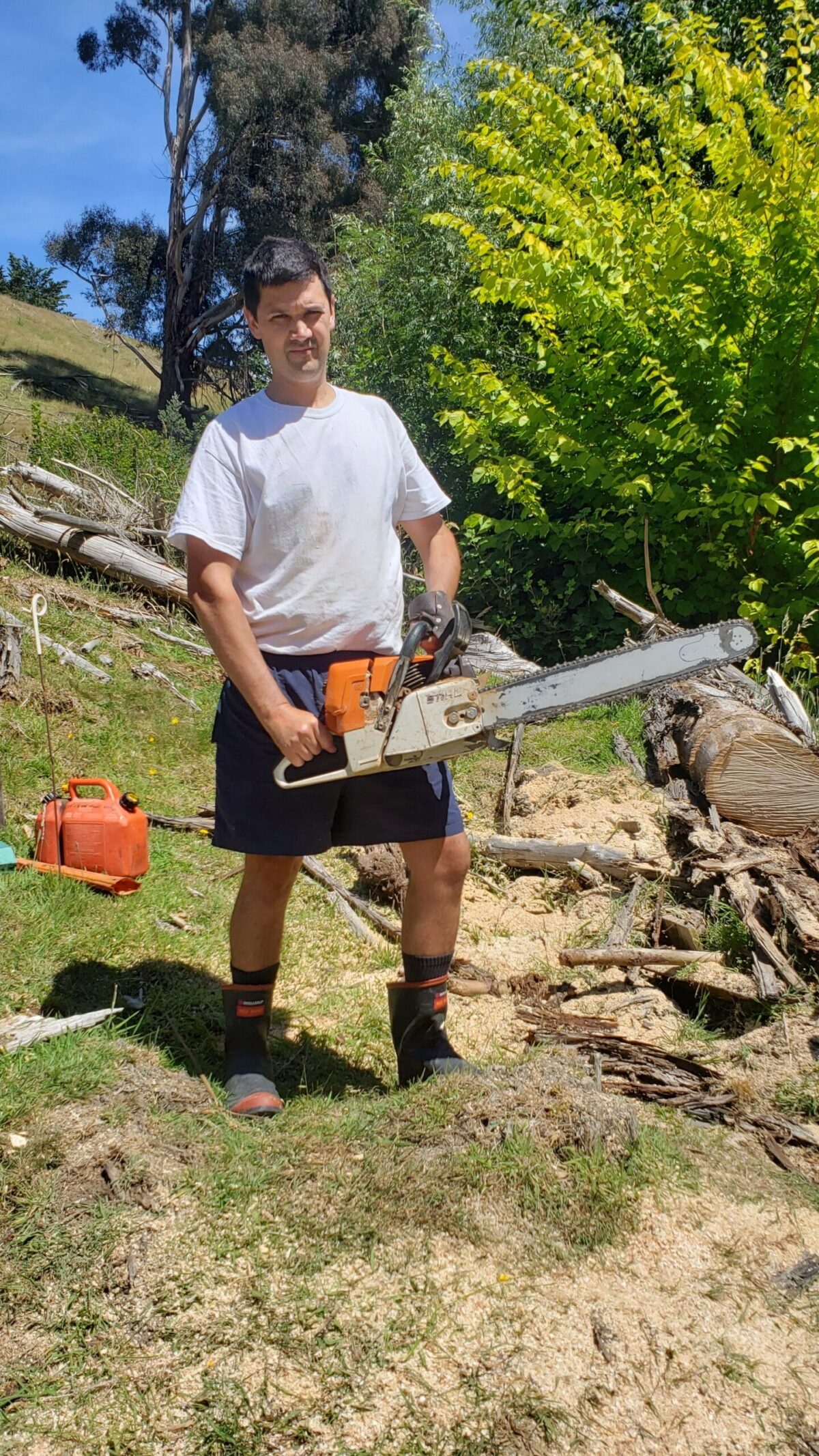 Here are some of the differences between the 2 saws: 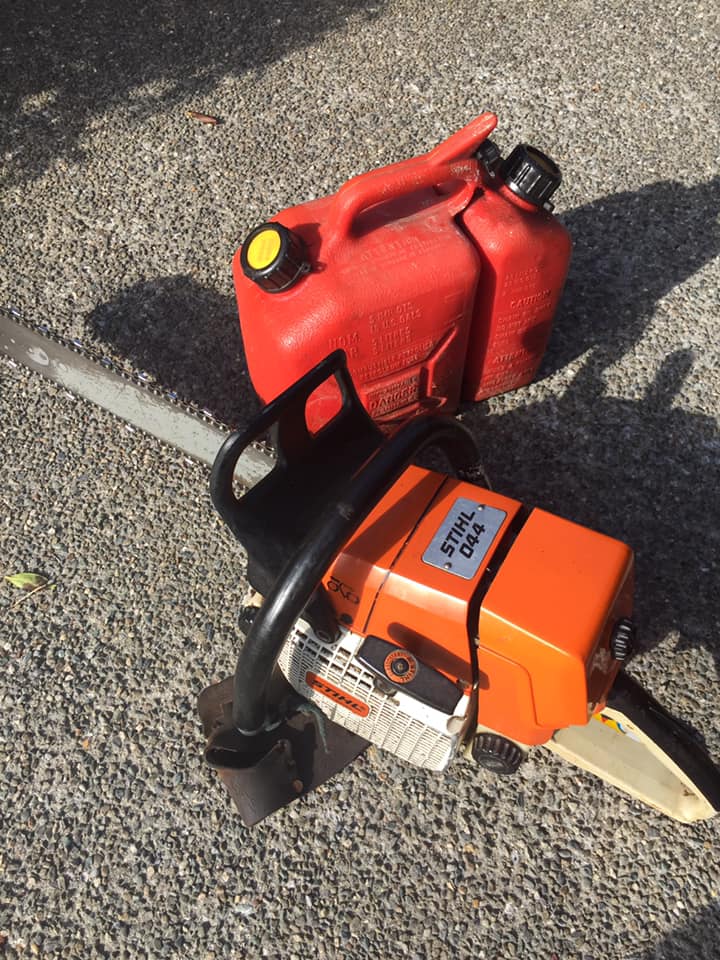 But if you do talk with Stihl chainsaw fans, it does come off that way. The 044 is almost universally loved by those who own them and run them.

They are a good pro saw for commercial use but they’re just as popular among homeowners who appreciate saws and buck a lot of firewood.

In saying that, it’s one of Stihl’s largest chainsaws so it’s not the ideal saw for beginners or those who do not have a lot of experience. The MS260 might be more appropriate, or even the MS230 for complete newbies.

Let me know if you have any questions in the comment section below and feel free to share your thoughts and experiences as well.

How To Prune A Camellia And Rhododendron Hedge: Is A Hedge Trimmer OK?