The 075 is well known as a saw that “weighs a ton” and “will vibrate your joints from your toes to your fingertips.” Someone else said, “it will vibrate you to death and then they’ll have to pry your hand off the handle.”

But those things are just part and parcel with these old and powerful saws.

The 075 AV that is pictured throughout this post belongs to Edward Knapp. It’s an excellent example, being all original, and is one of the highlights of his large collection (which I hope to be sharing more of).

Someone posts a picture of their Stihl 075 in an FB group to show it off or to list it for sale and then they are met with comments like this:

That’s not an 075 because the chain brake, oil fill location, and muffler setup are what you’d expect on an 076.

The oil fill location is on the top of the case on every 075 I’ve seen so far. The 075 only has a half cover on the Exhaust side also.

In researching the 075, I saw this happen 5 or 6 times in FB groups or forums.

I think that these saws with a slightly different design are most often genuine 075s – they were just produced at the end of the production run before the 076 (which replaced it) came out in 1980.

There are three or four main differences between the 075 versions (that you can see on the exterior of the saw).

You can see Edward’s saw is designed like this.

The other difference is that the earlier models tend to have the OLD Stihl logo, as you can see on Edward’s saw, whereas the later version usually has the new Stihl logo.

Of the 20 to 30 saws I saw pictures of, there were only one or two exceptions to this rule (for example, in the video below).

Here is an example of what is most likely an 075 that is often claimed to be a 076 with the wrong sticker or top cover. 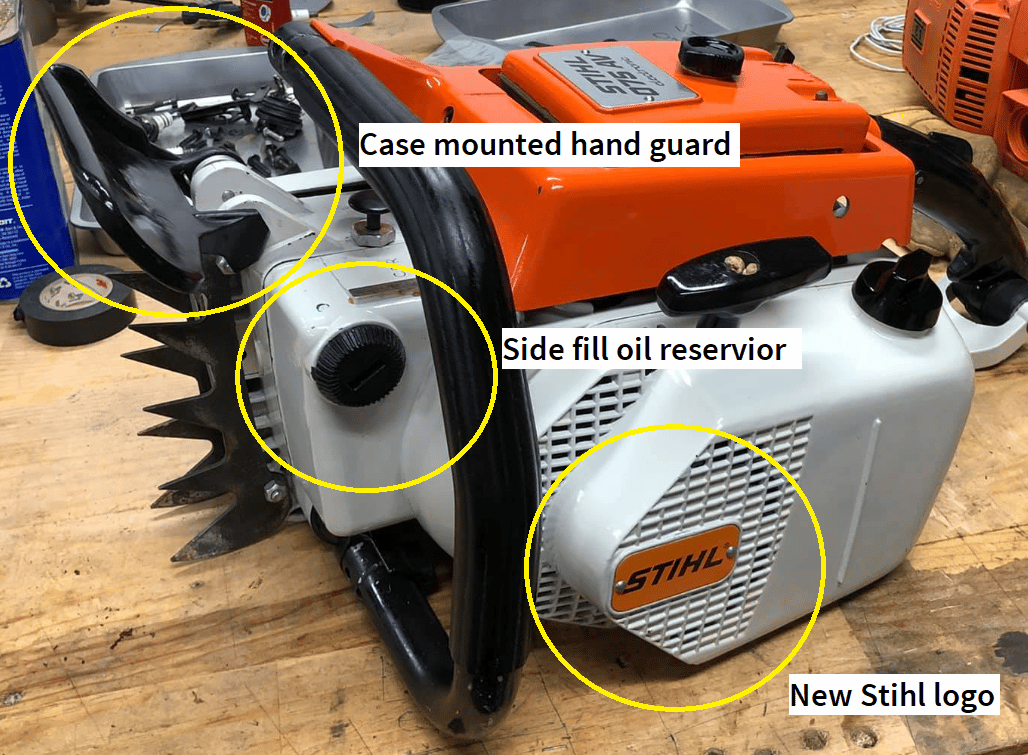 You can’t see the complete muffler cover in that image (obviously), but it also has that.

So, if you see a Stihl 075 with the new Stihl logo, it will most often also have the side access oil reservoir, full muffler cover, and case-mounted hand guard (or no hand guard at all).

Alternatively, if you see an 075 with the old logo, it will most often have the top access oil tank, half muffler cover, and double attached hand guard, as you can see with Edward’s saw.

Both are 075 saws, they’re just manufactured at different points of time with a slightly different design.

However, that’s not to say there aren’t any 076s that have had the air filter cover replaced with an 075 cover, because I’m sure there are. 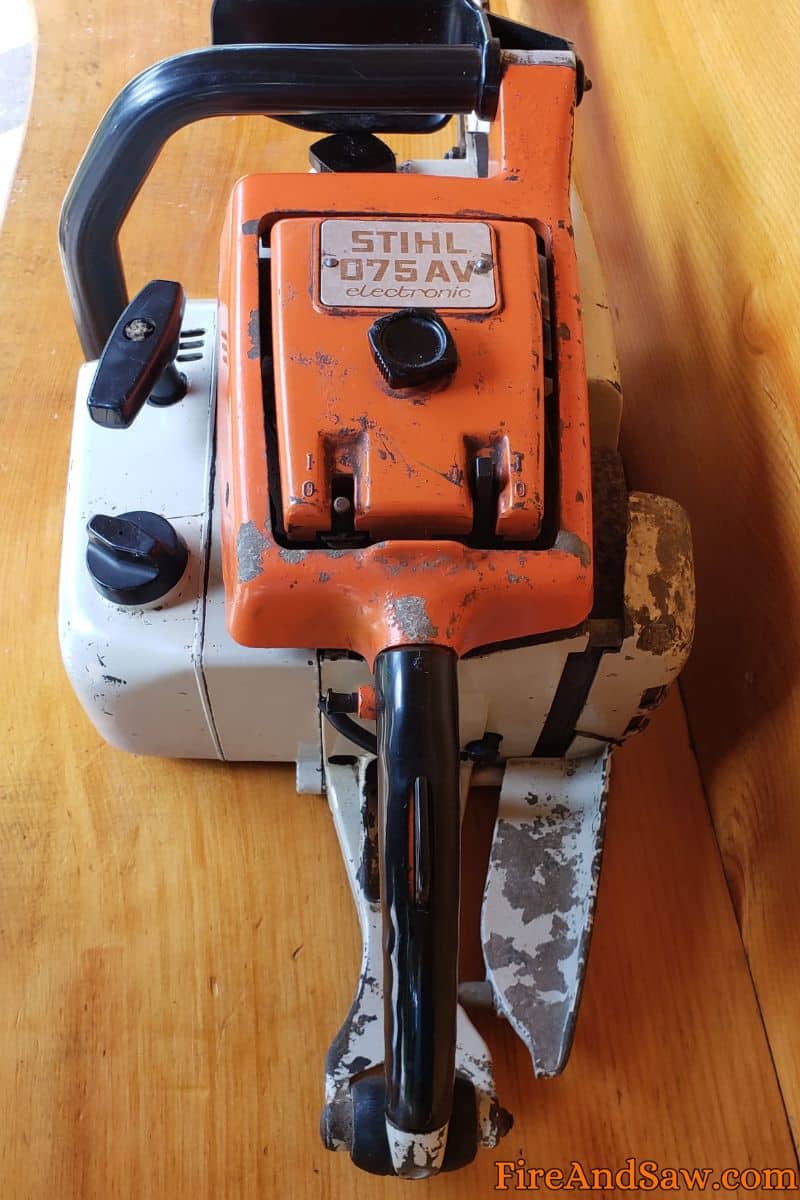 Also, alongside the two switch controls (kill switch and choke), some 075s will also have an additional manual oiler plunger.

All of them were built with an automatic oiler, but Edward’s saw, for example, doesn’t have one (the saw in the following video does).

Of the dozens of 075 saws I’ve seen, the saw in this video from The Chainsaw Guy is one exception to the ‘new Stihl logo’ rule.

It has likely been rebuilt and the parts are probably not all original to the saw.

It has the oil tank access on top, the new logo, a full muffler cover, and no hand guard or chain brake (which, I believe, was optional on the 076 but not on the 075).

The 075 badge is missing from the saw altogether.

However, the video lets you hear the saw in action and it gives a good rundown of the features.

The 075 won’t be for everybody because of its weight, power, and lack of modern features (such as a good AV system).

It’s not a saw you’ll want to be running every day, but it is fun to use from time to time. It won’t have any trouble dropping trees or bucking large logs.

Those who use it for milling say:

These comments are very typical.

The main downsides of the saw that people bring up are that parts are hard to find and that it’s heavy. And simply because they believe “better” saws are out there.

But we all know there are more modern saws like the 500i or MS440 that are more comfortable to use, but that’s not why most people are looking to buy vintage saws.

I think this comment is a good summary of the 075:

The main problem with these, in my experience, is that they were often used (and abused) commercially, so you really have to watch out for saws that are just completely worn out.

Look for makeshift repairs, stripped bolt holes, missing bolts, gouged pistons, etc. The difficult-to-find parts are the muffler, NOS jugs, and pistons. However, Stihl made a BUNCH of TS760 cutoff saws; these take the same jug and piston, so I’ve bought a few of these.

Anyway, because of the weight and parts availability, it’s not a great saw for lugging around in the woods if you’re cutting daily, but lots of folks use them for milling.

Of course, many guys are buying simply for their collection and not for use as their regular firewood or felling saw.

While some say there are no issues with availability, some parts are harder to find than others.

075 mufflers, for example, are difficult to track down, but they are out there.

There are lots of these saws around and parts are pretty easy to come by. In fact, there hasn’t been a new I part I needed that my Stihl dealer hasn’t still been able to order for me, and I’ve needed a lot.

Though, to be fair, that was written in 2007 and parts are more difficult to find now.

Ebay and HL Supply are good spots to look at first.

At the time of writing, there are cylinder kits (including rebuild kits), crankshafts, pistons, clutches, flywheels, and so on. Though it’s mostly aftermarket stuff.

If these sites don’t have what you’re looking for, your next best bet is the Stihl Facebook Groups.

There are some good tips on buying a 075 in this video or check out this guide for more advice.

Price always depends on the condition of the saw.

As time goes on there are fewer and fewer tidy 075s for sale, so the price is more likely to up than down. Also, chainsaw collecting seems to be on the rise, and good vintage saws can sell for as much as new pro saws.

At the end of the day, they’re only worth what you or the next guy is willing to pay but always do your research into the particular saw to make sure you know what you’re getting.

Next up, check out this little Stihl 011 I picked up recently!

What Does NOS And NIB Mean Relating To Chainsaws?

What Does G Mean On Stihl Chainsaws? Stihl GEAR Drive