The 036 is a pro-grade Stihl chainsaw, so it’s built better and tougher than the homeowner saws and can be expected to last for decades if treated right.

036 owners and users love this:

One of the best pro model firewood saws Stihl ever produced. The 036 Pro that I bought new has been absolutely fantastic. A friend had one for his tree trimming business. Ran it for 21 years before she blew.

The 036 pictured here is another one of Edward Knapp’s chainsaws – we’ve been sharing many of his saws, many of which are vintage collectibles.

There are three different versions of the 036:

The saw was produced over a period of 11 or so years, so it did go through some changes over this period.

The base model and the PRO are basically the same saw but the PRO has a decompression button and a slightly different air filter.

Some people also believe the base 036 is a homeowner series saw while the 036 Pro is the pro series saw, but this is not the case. Both are pro-level saws, the Pro version just has those few extra features.

Most (if not all) of the base model 036s have adjustable oilers as well.

The QS designates the additional Quick Stop Brake feature which is an additional chain brake system stopping the chain within one second of taking your hand off the rear trigger.

Parts associated with the Quick Stop version are more difficult to find.

Sometimes you’ll see people talk about an 036 AV or 036 Super, but there were no 036s designated Anti Vibration on the model name/number (though it did have an AV system) or Super (which designates a larger bore or stroke).

You might also see mention of an 036 AVSEQ, but I’ve not come across one of those either.

While most of the 036 specs have been shared already, here they are summarized.

The following screenshot comes from the Stihl website in 2001 when the 036 Pro and QS were available for sale new. 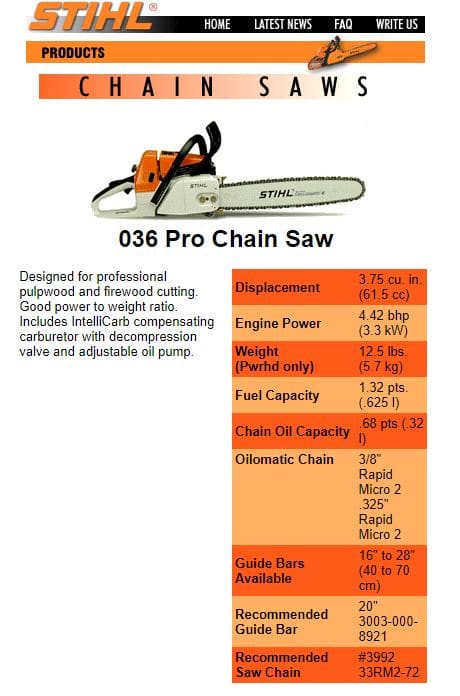 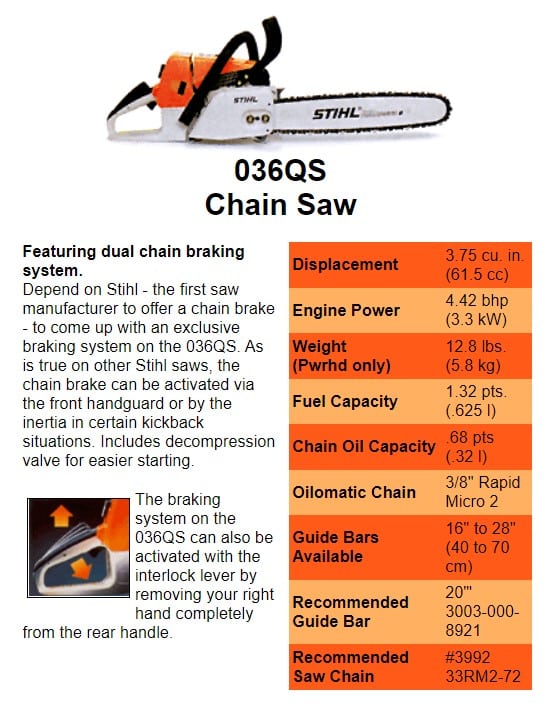 Of which they said:

Depend on Stihl – the first saw manufacturer to offer a chain brake – to come up with an exclusive braking system on the 036QS. As is true on other Stihl saws, the chain brake can be activated via the front handguard or by the inertia in certain kickback situations. Includes decompression valve for easier starting.

The braking system on the 036QS can also be activated with the interlock lever by removing your right hand completely from the rear handle.

Today, Stihl has this chain brake feature standard on all new saws.

Check out the video review of the Stihl 036 Pro above.

You’ll see and hear the saw in action plus hear the review of someone (Outdoors With The Morgans) who has been using it for over 25 years to cut thousands of trees.

It’s a great saw for firewood – much more powerful than other old Stihls like the 018 or the 026. Especially if you’re cutting thinner-width trees and logs, the 036 really rips through them quickly.

And here are some positive and negative comments from real users of the 036 (from the Stihl Chainsaw Fans group).

Eric, one of the members, has fond memories:

That was my favorite saw until somebody came to my house and took it out of the back of my pick up truck in my driveway. I almost liked it more than my 661. Obviously not as much power but all around amazing saw. I’m looking for another. Was 20 years old.

And here are the not-so-positive comments, which are much harder to find.

Besides the fact that parts are harder to find for old models than new models, and that it doesn’t run as smoothly as a new perhaps, there are very few cons.

036 parts are not overly difficult to find, especially if you ask around some of the Stihl Facebook groups.

Once it starts getting towards that top end of the price people would rather spend the money on an MS360 or MS361.

The price depends on the condition, but there are a lot of tidy and barely used 036s out there that are in excellent condition.

The 036 is a very popular saw that should be snapped up quickly if you see it listed in good condition for the right price – if you don’t grab it someone else will!

Even if you see a saw for sale that needs a bit of a rebuild, it’s usually well worth doing.

Reviewers all love the 036 for firewood and felling trees, so you’re unlikely to go wrong with it.

Find out more about other old Stihl chainsaws and, if you want to check out some more of Edward’s chainsaws, here’s his 017 or his 075.