The Stihl 070 is considered by many chainsaw collectors and enthusiasts as being one of the best chainsaws ever made.

It was made until much later for the likes of the Asian, South African, and South American markets, and I think they were still making the 070 until recently.

The 070 pictured throughout this post is (or was) owned by Simon Spence of Scotland and is in great condition.

He bought it from a man whose father had it stored away in a locker for over twenty years. It’s all original, apart from the bar and chain, and is believed to be a 1967 model with very few hours on it.

I’ll get into some of the ways you can determine if you have an 070 or an 090 below, but let’s just check out this saw first.

Simon was selling this saw and his best guess was that it was a 1967 model.

However, someone in the comments said:

Orange top started around 1979, if the muffler is original, it is date stamped, month and year, on the handle side.

Though I’m not sure if this is 100% accurate either.

You can see the 070 tag has come off this saw, which can make it difficult to identify if you don’t know what to look for.

The saw is still very popular for use in parts of Asia for freehand ripping. In the west, it’s commonly used as a milling chainsaw.

The earlier 070 Contra didn’t have the hand guard that you can see here.

This particular saw is in very good condition.

The paint condition is pretty good on this saw, but many people choose to repaint when restoring them.

The paint chips and imperfections give the saw a bit more character. 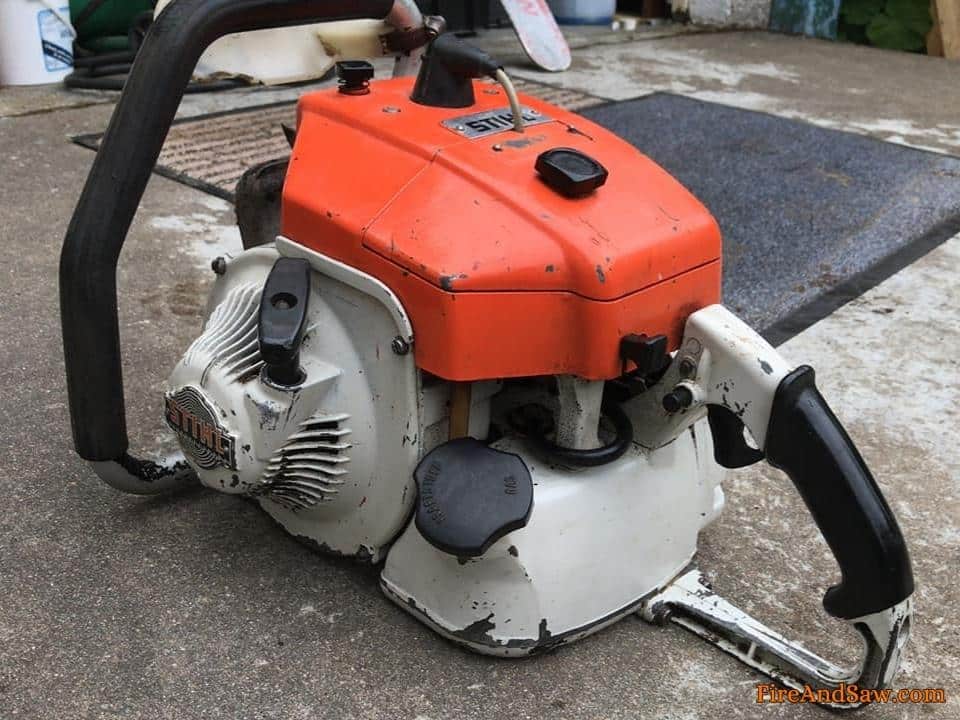 The AV version has a different handle that connects the back handle with the front – it’s a bit like a top handle saw.

The 070 is also very similar to the Stihl MS720 which is believed to still be in production.

The 720 can’t be sold in most countries because of emissions and safety standards but is still sold in countries like South Africa.

One of the quickest ways to start identifying it is to remove the clutch cover and check if it has 3 clutch shoes. The 070 had 3 whereas the 090 had 6 shoes.

And as you’ve probably figured out, all these parts are interchangeable. It’s not uncommon to have a variety of different parts on a saw today, so while it looks like an 070 externally, it may still have an 090 jug.

Others chimed in and added:

On an 070, if the muffler is original, it will have the year and date of manufacture stamped on it.

It can be tricky working out exactly what you’ve got because there are a few saws that look very similar, from the 070 and 090, to earlier contra models and newer 720s or 780s.

If you’re still really unsure, best to post some pics in the Stihl FB groups and someone there will tell you quickly.

This screenshot comes from the Stihl South African site in 2007 when the saw was listed as the MS070 – not something many of us in the west have come across.

Specs are the same as with the original saw:

It’s a powerful Stihl saw and it differs from newer saws like the MS880 in that it’s a more simple design and construction, and it has less features.

It’s a lot louder and will put out more fumes, the AV system isn’t going to be nearly as good, and it won’t run as smooth.

There’s no chain brake or electronic ignition, and parts can be hard to come by. However, there are those who would say the 070 is more reliable than a modern saw.

When it comes to distinguishing a genuine 070 from a knock-off clone, here’s some advice from Paveen Raj.

He sells Stihl saws, including the 070.

These are dead give aways, the OEM saws have always had these since the beginning. If you come across phillips or allen head then walk away, most likely its a clone or someone has been in there.

Over the years to combat clone stihl has taken number of steps. One of them is the embossing of Stihl on almost every part of the saw. The MS720 has a raised shroud in order to counter clones. They probably realised soon after there’s no way stopping fakes so they kept offering 070 and 720 to 3rd worlds.

I guess everyone knows this, but I wont share the number for a number of reasons.

4. The lettering of words

Stihl has their unique logo. Over the years the clone saws have closed the gap but still its obvious for trained eyes.

The last one can be what makes people suspicious initially – fake Stihl branding is usually pretty obvious.

However, it doesn’t always mean you’re dealing with a clone. Sometimes the saw has just been badly restored.

Check out Holzfforma chainsaws if you want to buy something that you know is a Stihl clone.

When you search for the 070 on YouTube, you’ll find tons of videos from users in Thailand, Malaysia, the Philippines, and other parts of Asia. The video embedded above is one example of a brand-new 070 being put to use (with quite a different tree-felling technique).

The 070 is really popular over there as they have a lot of large hardwood trees that the 070 makes light work of. Also, the saw is very durable, easy to maintain, easy to repair, and all-around easy to use. It’s heavy, but you get used to it.

In the US, Canada, and so on, most people buying 070s are doing so to add to their collection, and not so much to use regularly or at all.

Some parts are difficult to find in the US, UK, and so on, but they can be easier to find in Asia, especially if you don’t mind aftermarket parts.

Here are some comments from 070 users:

Parts can be difficult to find, it’s louder and smellier than a modern saw, it weighs a ton, and will vibrate you half to death (reminds me of the Stihl 075).

But as with all vintage chainsaws, if you take it for what it is remembering when it was first designed, you’ll love it.

As with all saws, pricing depends on the condition.

At the time of writing, there are no complete working 070s for sale on eBay, but you’re more likely to find them listed in the Facebook groups.

Let us know if you have any questions or comments down below – would love to hear your feedback on the saw we’ve shared in this post today.