Does Stihl Still Make The 070 Chainsaw In Germany?

Is the Stihl 070 Chainsaw still being manufactured?

While many would immediately say ‘NO!’, there is plenty of evidence that it is… and no, not just clone saws – genuine, authentic, real-life 070s.

Here is the evidence – let us know your thoughts in the comment section at the end!

Is The Stihl 070 Still Being Made?

This is an early Stihl 070 that I recently wrote a post on.

The new 070s which are either still being made, or were being made not so long ago, are built the same. The new ones have the modern Stihl logo, and look a bit tidier cosmetically, but they’re basically identical.

Here are three examples of why I think this saw has still been in production until recently. 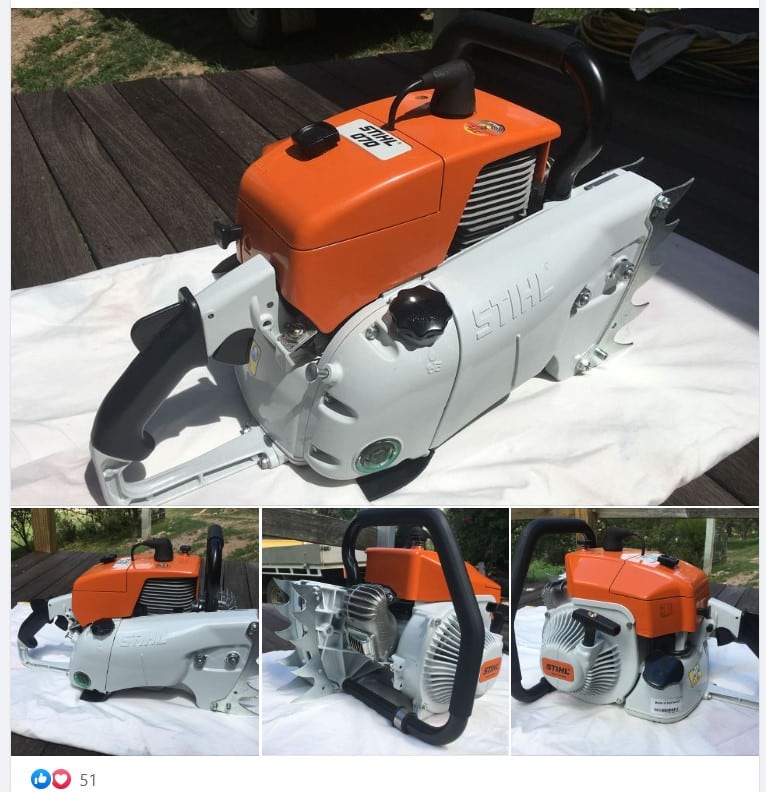 One of my favourites is an 090G, which are hard to come by in Australia.

I’m very excited about my brand new, authentic, German made, 070.

I’ve finally put my cash where my mouth is, and proved to myself that these saws are still being made in Germany, and being exported to a few less developed nations around the world.

I remember less than a decade ago, the 090 and 070 still being listed on the Australian Stihl website.

I beleive that at that time, one couldn’t buy these saws in this country, due to these models not satisfying our myriad regulations.

I know of one fellow who saw, with his own eyes, these saws being produced on an assembly line at the Stihl factory in Waiblingen, Germany in 2007.

Considering the abundance of new components available, it all made sense…..

Of course they’re still making this saw; it’s the worlds most reliable and rugged saw.

It has no peer!

Tracking one down was hard; there’s only 3 countries, to my knowledge, that import them….. and I phoned all of them!

Of course due to Stihl’s selling policies, one cannot mail order a saw….. it must be bought and registered in store, in that country!

Luckily, my wife has a friend in this particular country, who was happy to buy the saw, register it in his own name, and arrange sea-freight to Australia.

She started on the second pull, and runs with a nice steady idle.

Every part of this saw has the Stihl hallmarks, product numbers, etc.

I’ve already a couple of mates who have their name down for one.

I hope you enjoy the photos!

It’s likely that the country of purchase was Thailand, the Philippines, or Indonesia given their close proximity to Australia and further anecdotal evidence that the saw was and is still for sale there.

Surprisingly, there weren’t any comments on the post, but it did get plenty of likes.

The saw appears to be genuine Stihl. It looks very well made and has the ‘made in Germany’ tag and barcode, though he doesn’t share the serial number. 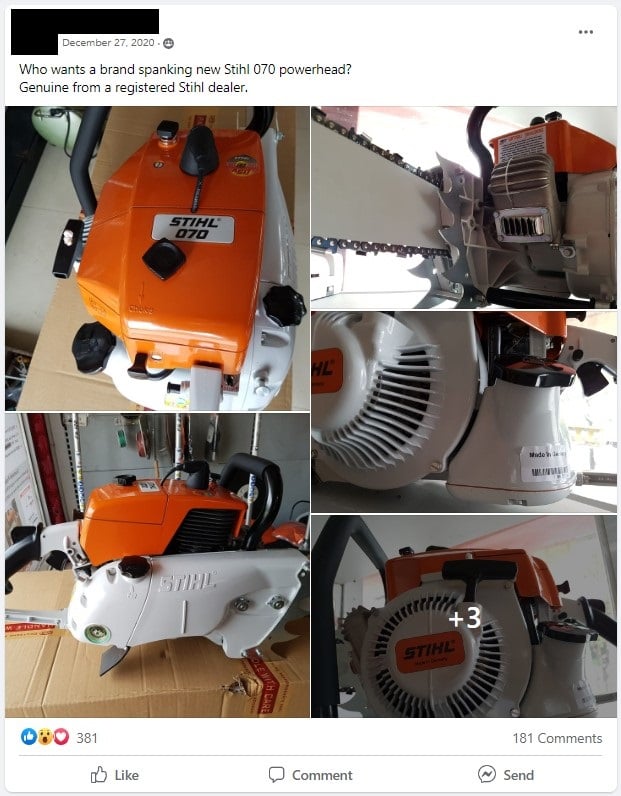 This post was shared by Jobert in the Stihl Chainsaw Fans FB Group.

He is based in the Phillipines and said:

Genuine from a registered Stihl dealer.

This is a much larger group of over 100,000 members, so it received a lot more attention. The other difference is that this guy was looking to sell some new 070s.

If you look at the pictures, it appears identical to the previous chainsaw, right down to what appears to be a Stihl dealer sticker on top. He shares in the comments that the saw costs 65k Php (Philippine Peso) to the dealer – approx. US$1130.

There are a few comments from those who think this saw is fake.

They never produced that saw in Germany while barcodes were in existence. The current 070 production line is in Brazil.

This definitely should be removed by admins as a scam and the author should be kicked.

You maybe right about productions in Brazil of certain parts but if the OEM label says its made in Germany then that’s that.

There’s your Stihl original and anti-counterfeit sticker at the top of the right screw of the top cover. You seem to know too many clones and can’t tell the real ones.

The only saw we have here that’s made in Brazil are the MS382 models. At least that’s what’s written on the tag, who knows which part comes from where.

I would have thought it was made in ”WEST GERMANY”.

The reason for this confusion is that the production years for the 070 are usually listed as 1959 – 1968. However, I think these are the dates for the English-speaking markets and Europe.

The OP wasn’t claiming the saw he posted was an original saw from that period, but rather a brand new 070.

Kevin possibly didn’t realize it was still being made for other markets that don’t have as stringent environmental and safety standards.

This is not an old stock unit. It’s totally new production units.

Who knows if all parts are from Germany, all I know is that it’s tagged to be made in Germany and certified genuine.

This is a Chinese knock off.

I’ve heard mixed revues on these saws. I would question how long one will live attached to a mill set up.

And the ensuing conversation makes it sound like he thought it was a Farmertec clone chainsaw – which it’s not.

On the other hand, many of the commenters believe the saw to be authentic.

There is no doubt that this saw is a Stihl and definitely not a clone or scam.

I like how many people don’t read comments first, and yes they still build all of these saws from factory for different areas due to emissions restrictions they ain’t sold in the states.

And Neil I also worked in a saw shop 30 minutes north of you and every Stihl part in the 1122 series will bolt on a Chinese clone. Especially blue ones.

Our post on the Stihl 720 is worth checking out.

The 720 has all the same specs as the 070, but with a few minor adjustments. It’s still listed for sale on many Stihl sites around the world today.

It’s a brand new ‘Made in Germany’ Stihl 070 making its first cuts bringing down a “Huge Trembesi Tree” in Indonesia.

Interestingly it has the same sticker on top.

In the description, the creator states “This chainsaw Stihl 070 is new old stock.”

However, I suspect it’s really just ‘new stock’ as it doesn’t have ‘Made in West Germany’ and it has all the hallmarks of a brand new 070.

We don’t learn much more in the comment section, but Christopher, who is based in England, asks:

No ‘Safety brake’ – unusual – for what looks like a ‘brand new’ chain-saw. Why is he holding the ‘plug spanner’? – Or is this an ‘old’ one that has been reconditioned?

I think he assumes safety standards are the same around the world or something, and that the saw would need to have a chain brake to be new, however that’s not the case.

This is old stock but new machine, the plug spanner for settings carburator.

What do you think?

So those examples are some of the most convincing evidence I’ve found that you can still buy a new Stihl 070, and there are plenty more examples out there.

While Stihl is very quiet about these saws, it appears as though they are still being made in Germany, though parts are possibly coming from other locations like Brasil.

I’d love to hear your thoughts down below, and let me know what other vintage saws you would love Stihl to be secretly manufacturing. I wouldn’t mind a new 015 or 056!