Husqvarna 359 Chainsaw Review: Should You Buy It Second Hand?

Those who are lucky enough to own one are full of praise and have few (if any) complaints.

You cannot buy a new Husqvarna 359 chainsaw as they were discontinued, along with the 357 XP (built on the same chassis), in 2011 with the release of the Husqvarna 500 series.

If you’ve found a second-hand one for sale then it can be a good idea to grab it quick before someone else does!

While the Husqvarna 359 is not technically a pro-level saw, it is one of the top non-commercial saws.

It’s perfect for home and farm use and can be used heavily. The saw will run happily for many hours a day.

For those processing between 5-10 cords of firewood per year, it’s a great unit.

It has a long history of use with professional chainsaw users as well and is popular in the tree feller and arborist communities.

The 359 is not a chainsaw for milling or for felling larger trees, nor will it run well for 10 hours a day all week every week. For that work, you’d be better off with a professional logging chainsaw.

It’s a very reliable saw that can be expected to last 10+ years with proper use, care, and maintenance. 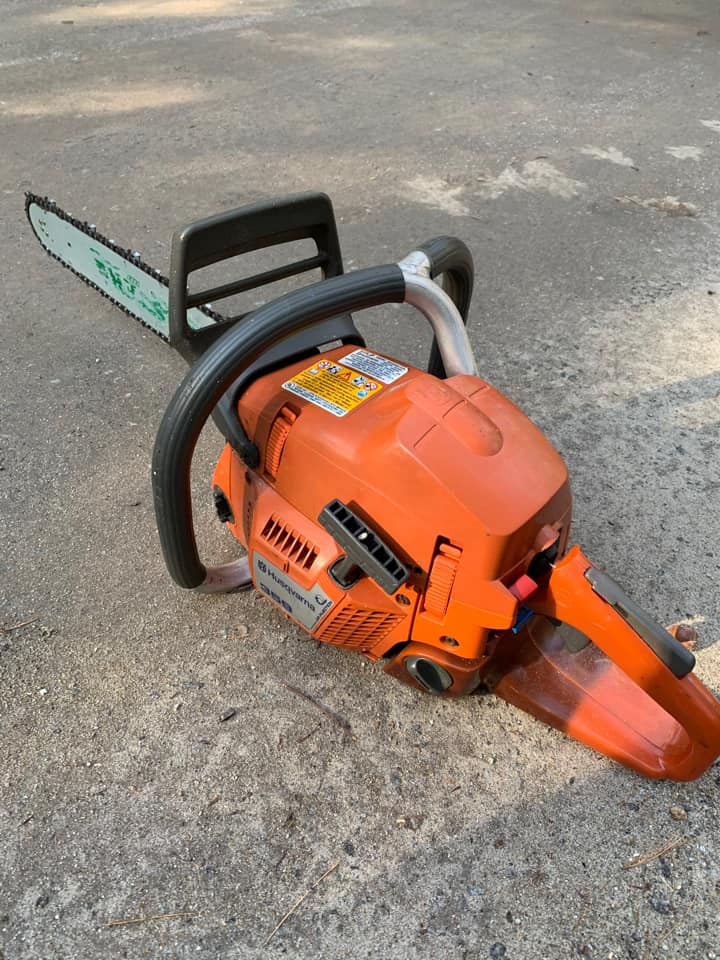 Exact features can vary between chainsaws produced at different times and in different locations.

Here are the standard features that you’ll find on most 359s: 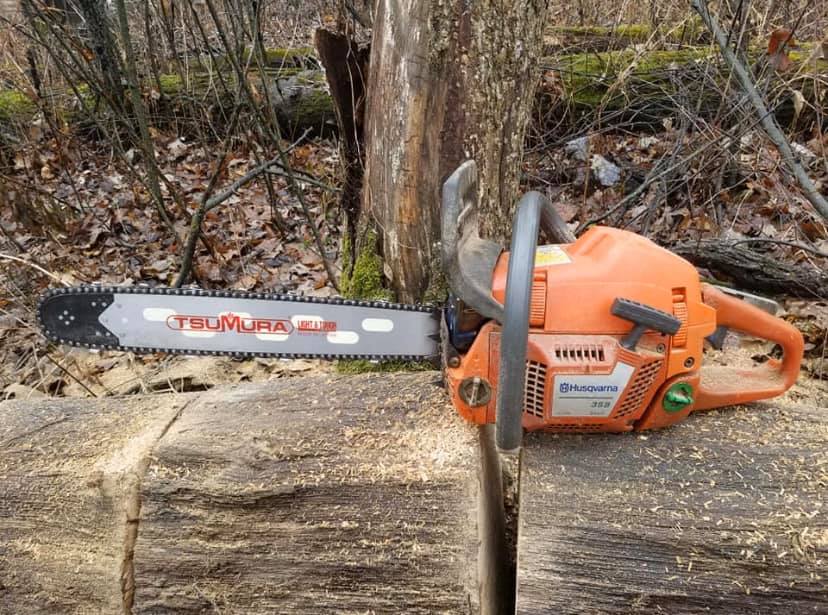 Again, the exact specs can vary between units made at different times and in different locations.

Besides the standard model, there are 3 other models in the 359 series:

You can find out more about the different Husqvarna designations here, but the ‘G’ indicates heated handles and/or carb.

The E Tech version of the 359 has a different muffler from the original model.

It’s a catalytic muffler that is said to make them run hotter and is less popular in the Husky community.

Having someone who knows what they’re doing complete a Husqvarna 359 muffler mod can help here. 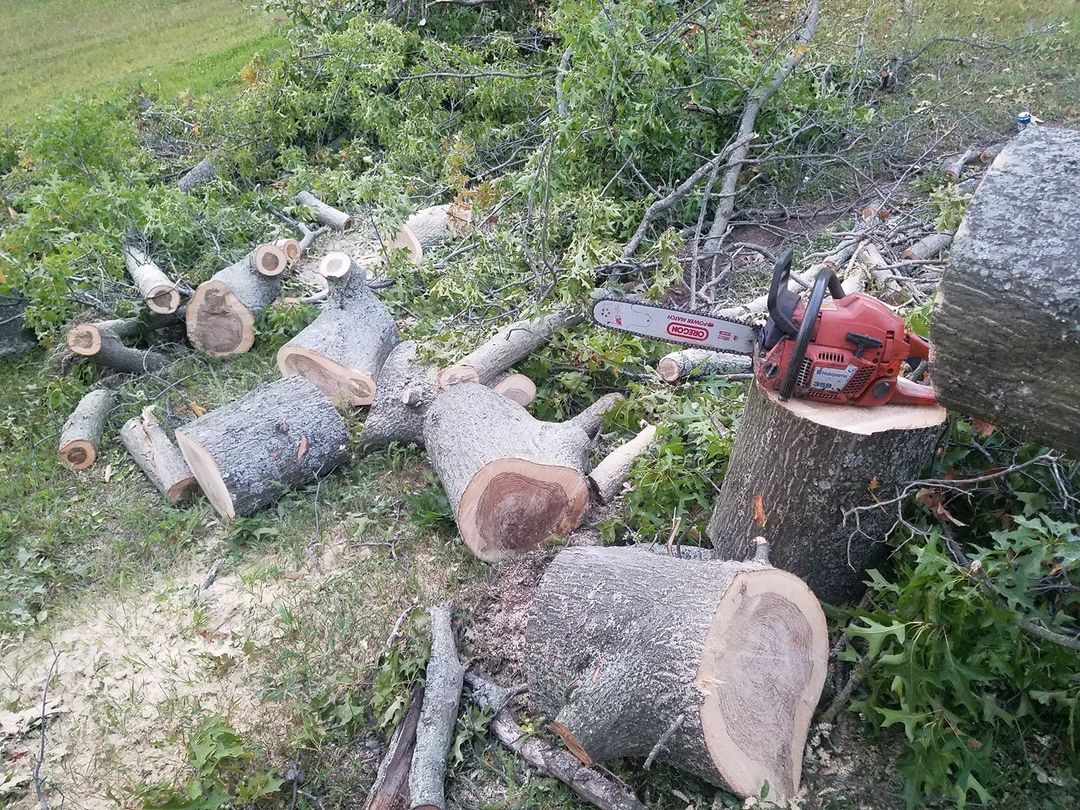 The 359 is recommended for use with a 13-20 inch bar, though you’ll find accounts of people putting larger bars on it as well.

When it was possible to buy a new Husqvarna 359 is was generally sold with a 20-inch bar.

The type of chainsaw chain you run will depend on the bar and the type of work you are doing. A 3/8 chain pitch is good, but a .325 also runs really well.

If you are running it with a 20-inch bar, this chain on Amazon should do the job.

How much should you pay for a used Husky 359?

If you’re able to pick one up for less than $200 it’s likely to be a good deal, especially as they become harder to find.

As always, it’s going to depend on the condition and whether it’s had any parts replaced or modifications made.

Comparable or alternative chainsaws to look into:

See the video above for a comparison of the Husky 359 with the Stihl MS391.

If you were just looking for a saw for around the home, see these top chainsaws for light work. 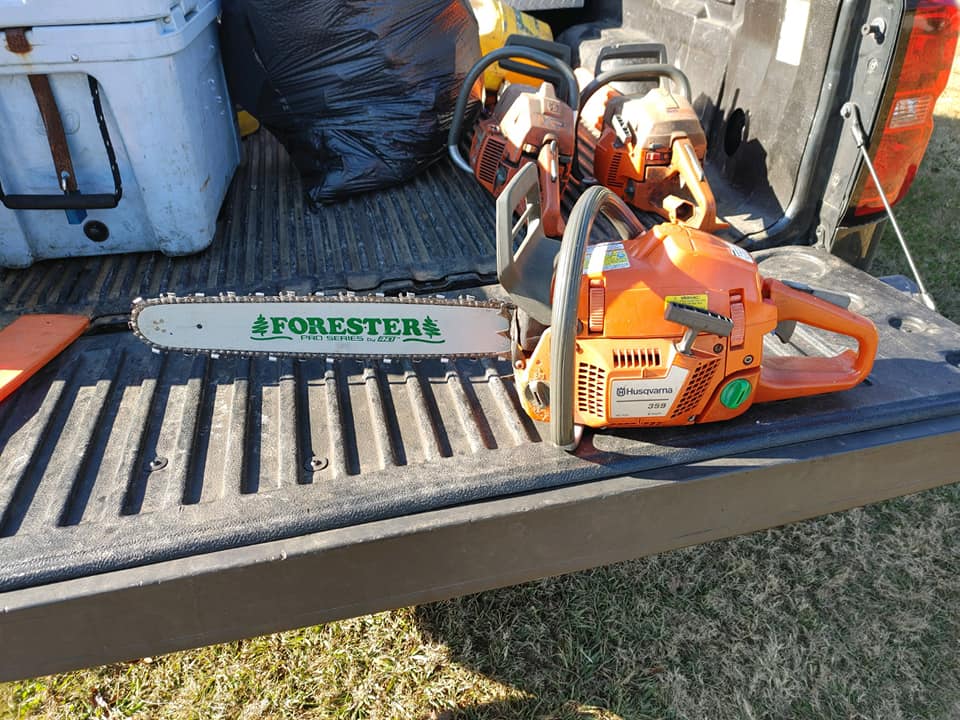 A quick search for the 359 in the chainsaw forums and Facebook groups reveals this to be an extremely popular chainsaw.

You might not know this, but there are people out there with dozens of Husqvarna chainsaws. These are either those who use their saws for work or who are just obsessed.

These are the types of people who are saying the 359 is one of their favorite saws for the work it can do.

While you will hear of needing to get it ported to get the maximum benefit, this isn’t something that is necessary for the average user.

Porting a chainsaw cylinder is a modification to give the chainsaw more power, and which allows it to run stronger and cooler.

If you’re looking at buying a ported 359 saw, it would be best to ensure it was done correctly to have peace of mind. 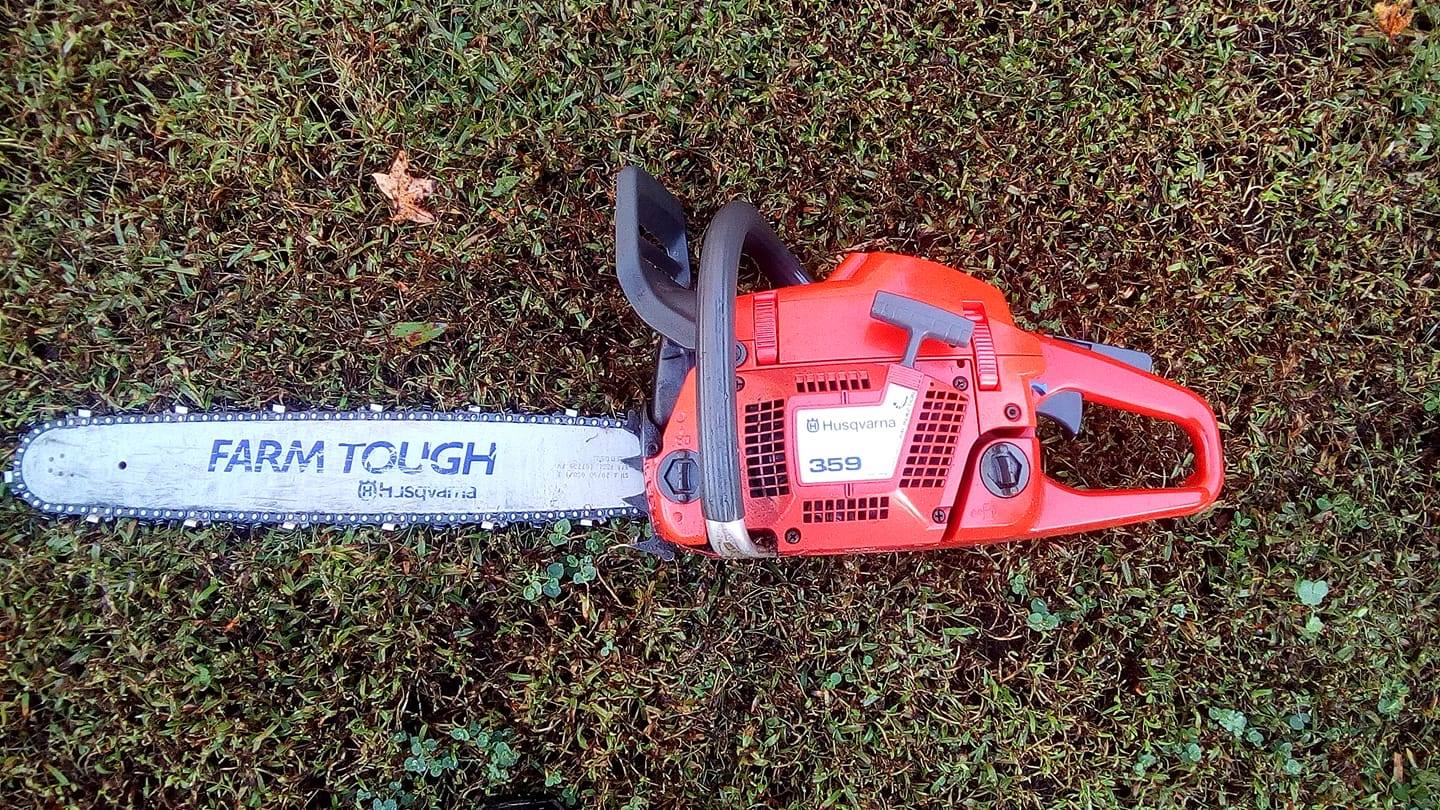 You’ve just bought or been given one of these chainsaws and can’t get it started or are discovering some problems.

Here are some of the things to consider and check:

The Husqvarna 359 chainsaws came with a Walbro carb that has an accelerator pump in them that often fails.

If you change out the carb and update the intake this can solve the issue.  You will need to replace it with a Zama carb with no accelerator pump. These can be picked up on eBay here for around $20 or search Zama C3 El-42.

It may only need a quick fix. Are all the screws on the top plate of the carburetor secure, for example? Sometimes that’s all that is required to get her humming. 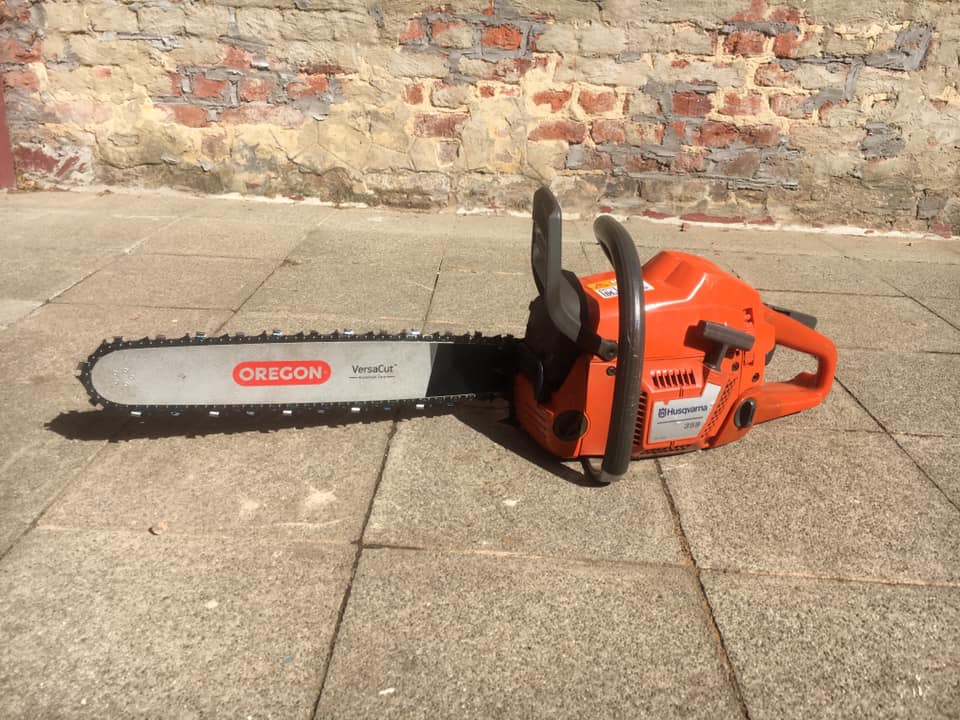 It’s not uncommon for chainsaws to leak bar oil, least of the Husqvarna 359. They are somewhat known for it!

They are great saws but tend to leak where the pump attaches to the suction line from the oil tank. You can get a new replacement line and this will solve it – for a couple of years!

Inner oil feed pipes for a Husky 359 (and most other models) can be picked up for around $10 or less.

They will also leak if they are left sitting in the sun or in a warm location. Pressure builds in the tank and the oil will find a way out.

Many have just learned to live with it by storing them on their side or empty. You can turn the saw 90 degrees to the side and store it that way. It’s not a fix but it does stop the leaking!

Here are some other ideas on how to deal with a 359 leaking oil:

A chainsaw that leaks bar oil isn’t anything new, nor is it the end of the world. However, it is a pain and something that’s good to get on top of!

What are the best ways to get more power out of the 359?

Find out how to port a Husqvarna 359 Chainsaw here. 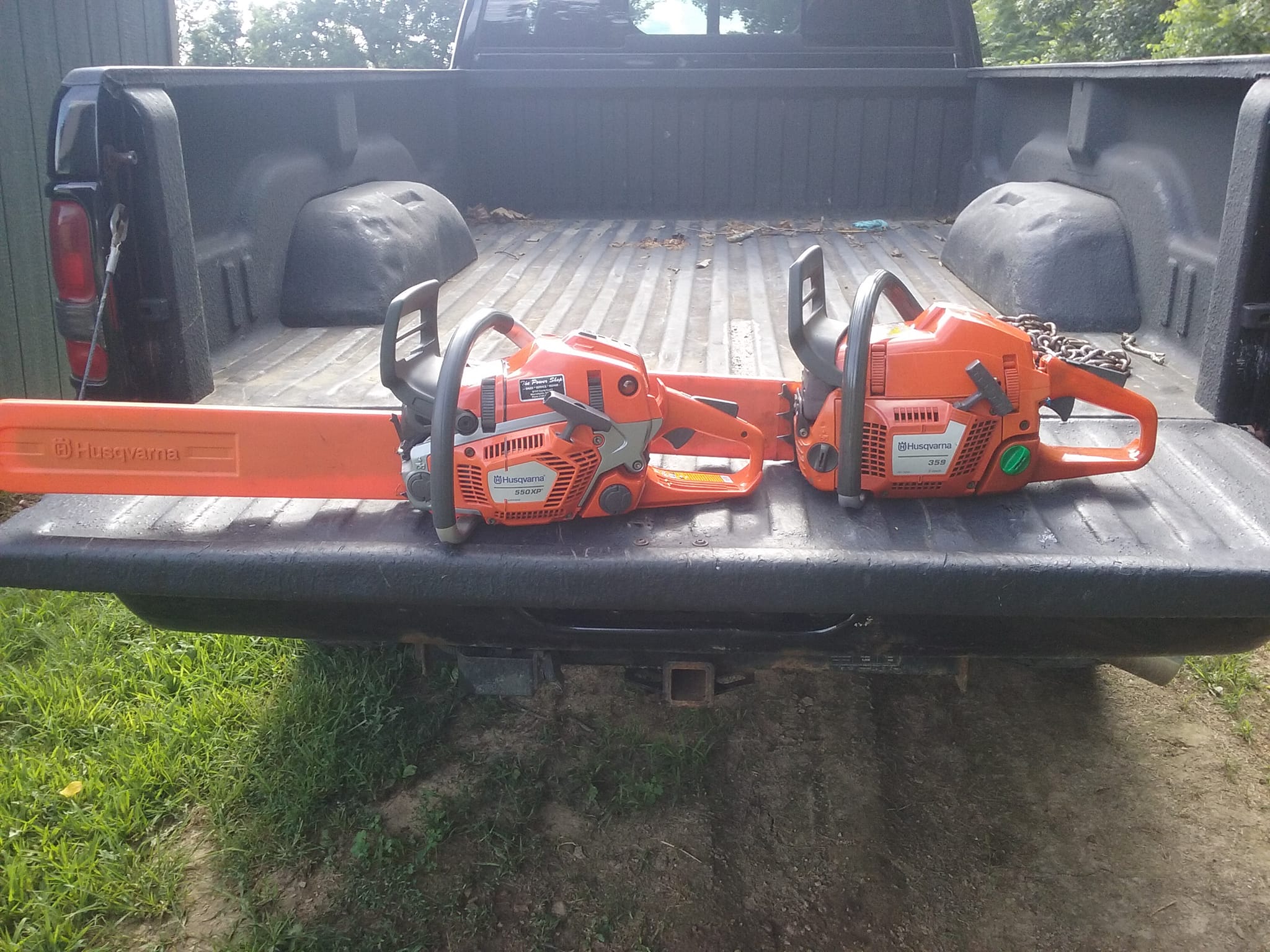 Whether you decide to go with the Husqvarna 359 or an alternative model, it’s hard to go wrong.

However, when buying a second-hand chainsaw it can be best to go with your gut. If something tells you there might be something wrong with the saw or the seller, it might be best to pass on the offer.

If it’s at a great price then there’s not much to lose!

A 359 that has been looked after and is in good condition is worth its weight in gold. It can be purchased knowing it will be great for all types of work around the home and farm.

Homelite Chainsaw Oil: What Is The Best Chain Oil And Fuel Oil?

11 thoughts on “Husqvarna 359 Chainsaw Review: Should You Buy It Second Hand?”