Is the Stihl 028 chainsaw any good?

It’s an old Stihl series 1118 chainsaw that was produced with varying designations from 1979 – 1990. That’s one of the longest chainsaw runs out there. Therefore, there are always plenty of used models for sale.

Keep in mind that the different 028 chainsaws – from the base model Stihl 028 through to the Stihl 028 AV Super Wood Boss – all have slightly different specs and features.

Here’s what you need to know about it to determine whether or not the 028 is a good chainsaw for you.

The 028 is a somewhat low-powered chainsaw at the higher end of their homeowner range.

The various different saws sit around the 50cc mark, making them good for felling small trees and bucking firewood.

However, if you’re wanting to process larger logs, you’ll want something a bit bigger like the 064 (another saw from the same era).

It’s a good chainsaw for homeowners and those wanting something for infrequent use. 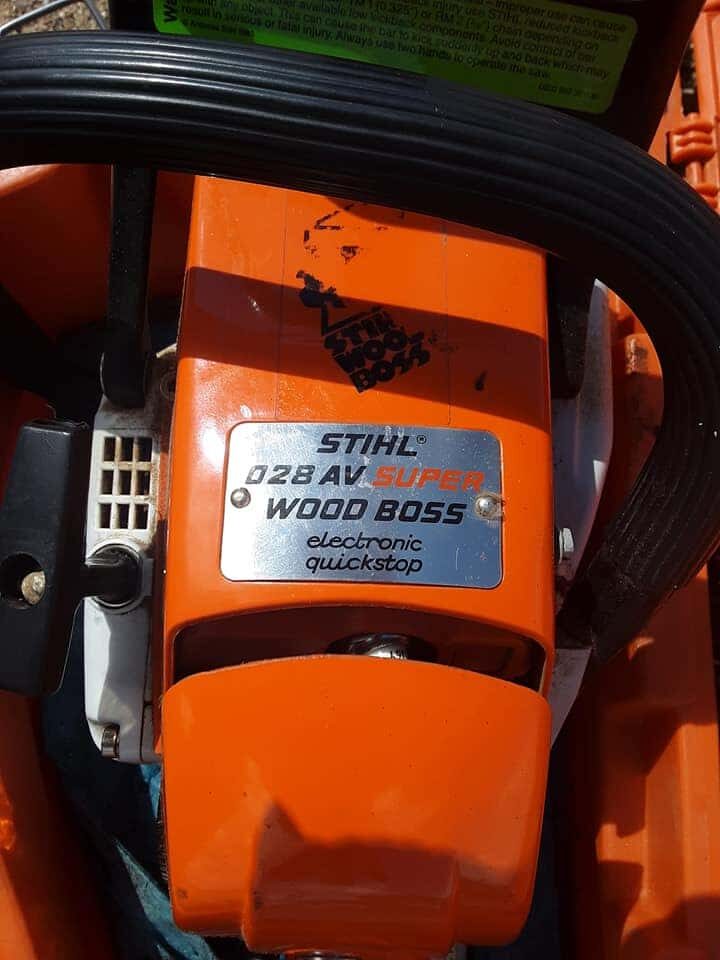 That makes listing exact specifications tricky because you really need to know the exact year and designations for your particular saw to find out precise specs.

Most of the 028s also have the AV designation for the Anti Vibration system, and 95% of the machines around today have this. However, some of the earliest models did not have this AV system (see the featured image, for example).

Wood Boss chainsaws are still around today (as with Stihl Farm Boss) but they are applied to different models now.

Here are the specs for the 3 most common 028 saws – remembering they can vary depending on the production year.

In some respects, you can say the first edition 028 is a completely different saw from the final edition ‘Stihl 028 AV Super Wood Boss with Electronic Quickstart’ – and what a title! 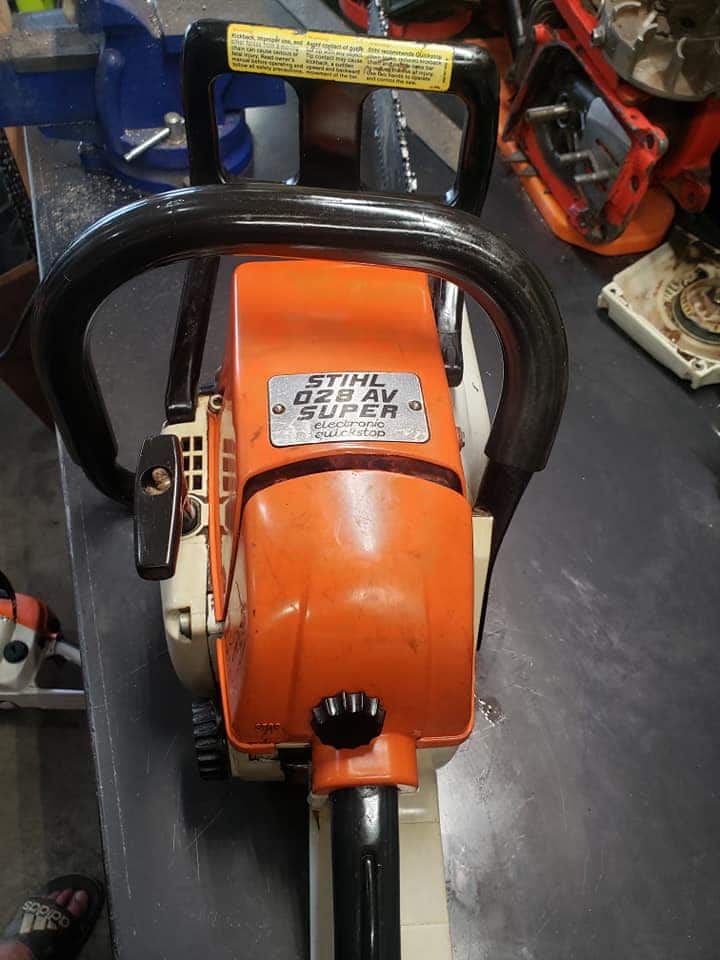 As with the specs, the features of the 028 vary a lot depending on the year made and particular designation.

For example, the anti-vibration technology changed a lot from 1979 to 1990, so those later models are going to have a higher level of comfort when in use.

Also, some of the earlier models had a front chain tensioning screw (the older style), while the newer saws have an easier side-tensioner.

You can expect the following types of features:

That last feature is also the designation ‘Electronic Quickstop’ that you see listed on many of the 028s – it’s what we now call a chain brake that stops the saw immediately when activated.

As with everything else to do with the 028, the price varies!

I’ve seen them listed, or heard of people finding them for literally $20. Then at the other extreme, you will find see them selling for between $300 all the way up to $400.

It’s going to come down to a few factors:

As far as where to find parts for the Stihl 028, there are a number of good spots, but OEM is expensive.

Ebay also usually has entire old chainsaws that can be bought cheaply for parts – sometimes these saws can even be repaired by the right person. 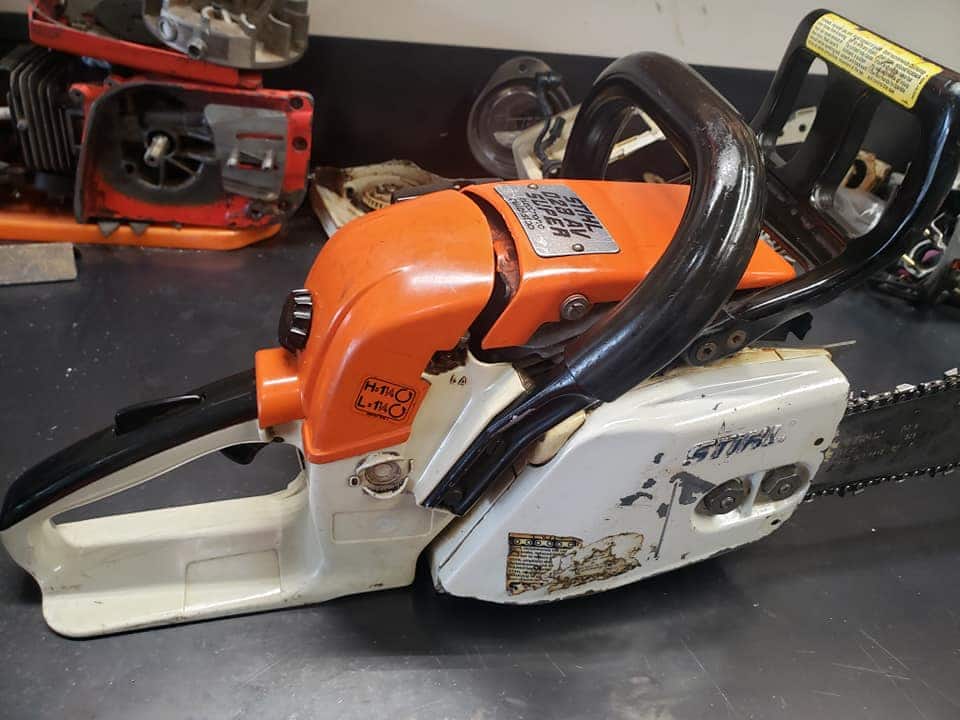 Some of the comments I’ve heard from friends or read online include things like, ‘it’s a top saw that is undervalued since the 026 came out,’ or, ‘one of their best saws – bought a used one in 1990 and it still goes great with no mods.’

One of my favorite 028 reviews says, ‘Not the biggest or most powerful but the best all-around saw ever made.’

Those who prefer the most powerful Stihl chainsaws aren’t going to think a whole lot of the 028, but those who are simply fans of all Stihl saws think it’s pretty great. 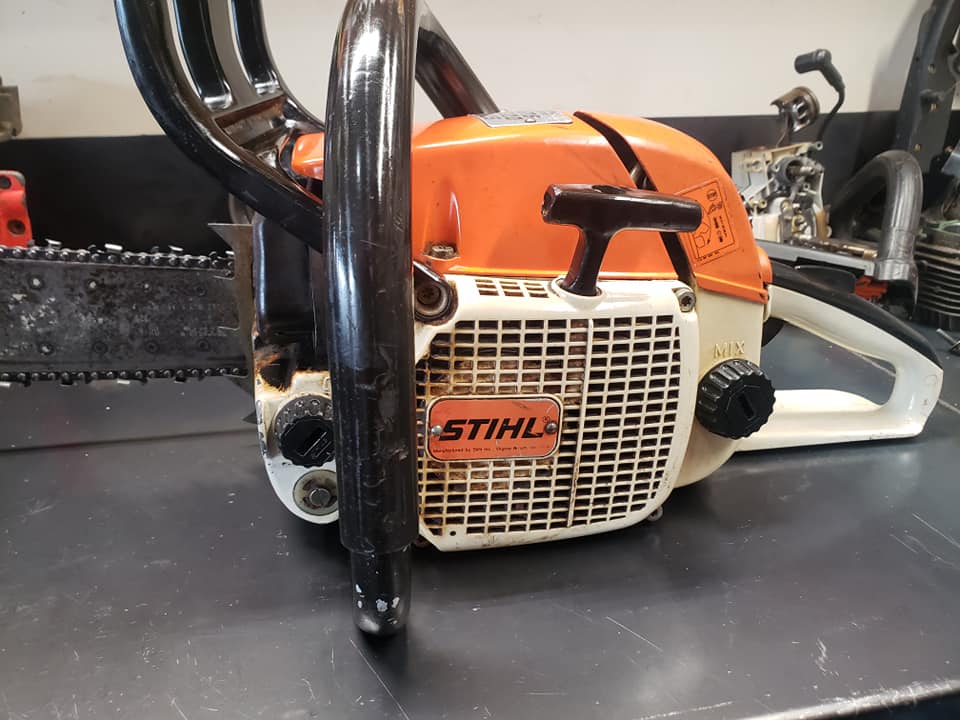 The Stihl 028 years made were:

The CCs of different models:

What chain does a Stihl 028 Super use?

You can use this semi-chisel chain from Walmart or if you prefer, this ripping chain from Amazon.

What is the best Stihl chainsaw of all time?

That is certainly up for debate and everybody will give you a different answer.

The 028 Super is a mid-range saw from Stihl.

It’s not a professional logging or forestry saw like the 026, but it’s certainly more powerful than small homeowner saws like the Stihl 011 AV.

Though there are plenty of small, lower-powered saws that are still professional-grade. The Stihl MS200T, for example, is a 35cc pro arborist saw.

What does AV mean on Stihl chainsaws?

It’s just one of the many chainsaw designations out there from the MS, MSA, and MSE on all modern saws, to features like Quick Chain Adjuster (C-B).

The 028 Chainsaw is a great old Stihl that’s worth picking up for the right price.

I’ve read about multiple people who inherit them from fathers or grandfathers, and who intend on keeping and using them forever.

They’re a really handy saw to have around – a bit heavier and a bit more sluggish than newer models like the MS230, but good nonetheless.

Let me know if you have any comments or questions down below. I’d love to hear your thoughts on and experiences with the 028 as well, alongside any more info on the Stihl 028 history.

What Does Stihl Electronic Quickstop Mean? The E And Q Chainsaw Designation