What Chainsaw Did Leatherface Use In The Texas Chainsaw Massacre Films?

What type of chainsaw does Leatherface use in The Texas Chainsaw Massacre?

It has got to be the most iconic movie with a chainsaw – and there are a few movies with chainsaws out there. Even those who have never seen it at least have some idea of what it’s about.

And what’s it about?

A crazed lunatic with a chainsaw, of course! 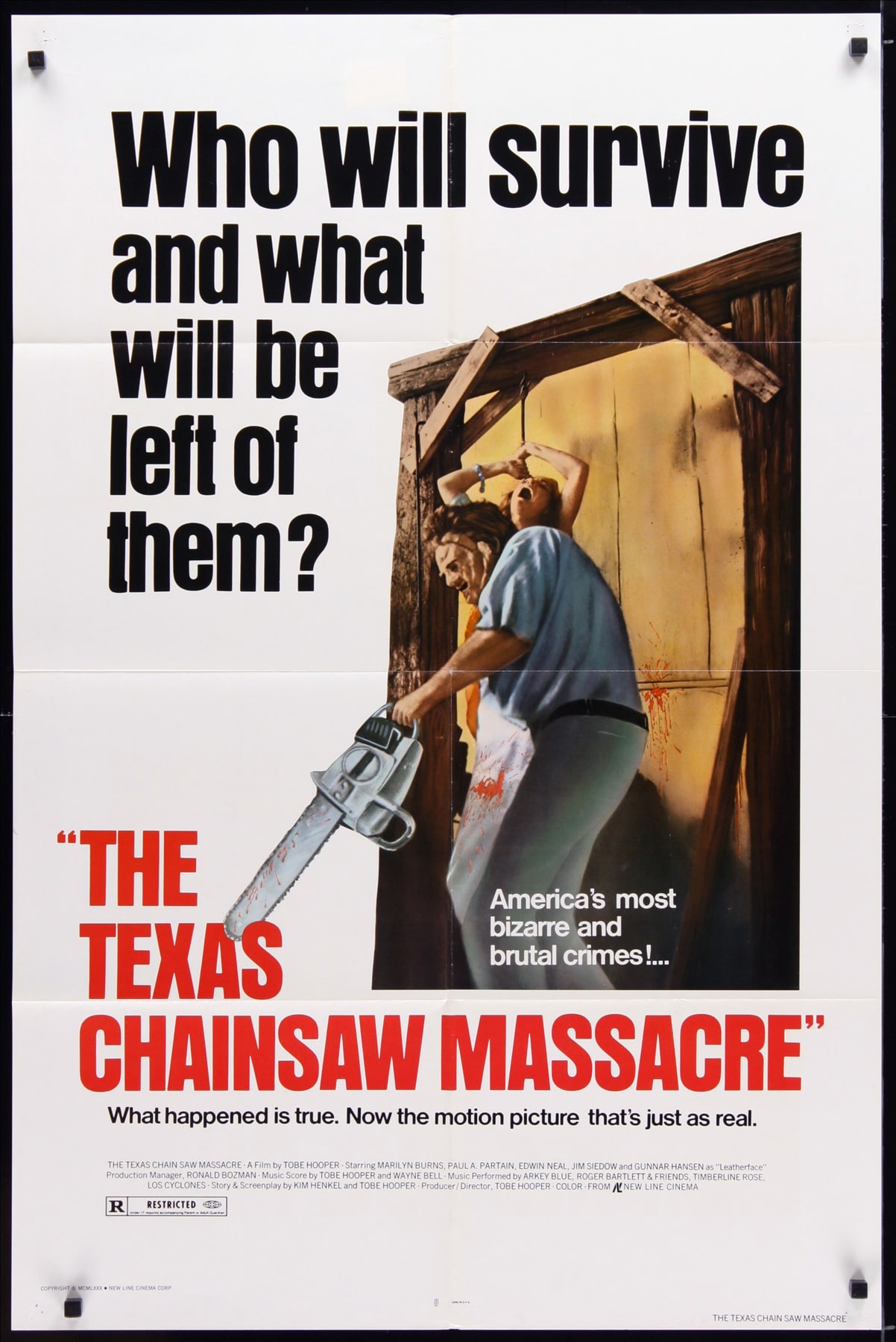 The original Texas Chainsaw Massacre movie was released on 1 October 1974.

The character Leatherface is said to be based upon the real-life serial killer Ed Gein (also known as the Butcher of Plainfield). However, as far as we know, the real Ed Gein did not use a chainsaw to commit crimes.

While the chainsaw part in the movie is completely made up, the horrific use of human skin masks is unfortunately not (though I won’t get into that here)! 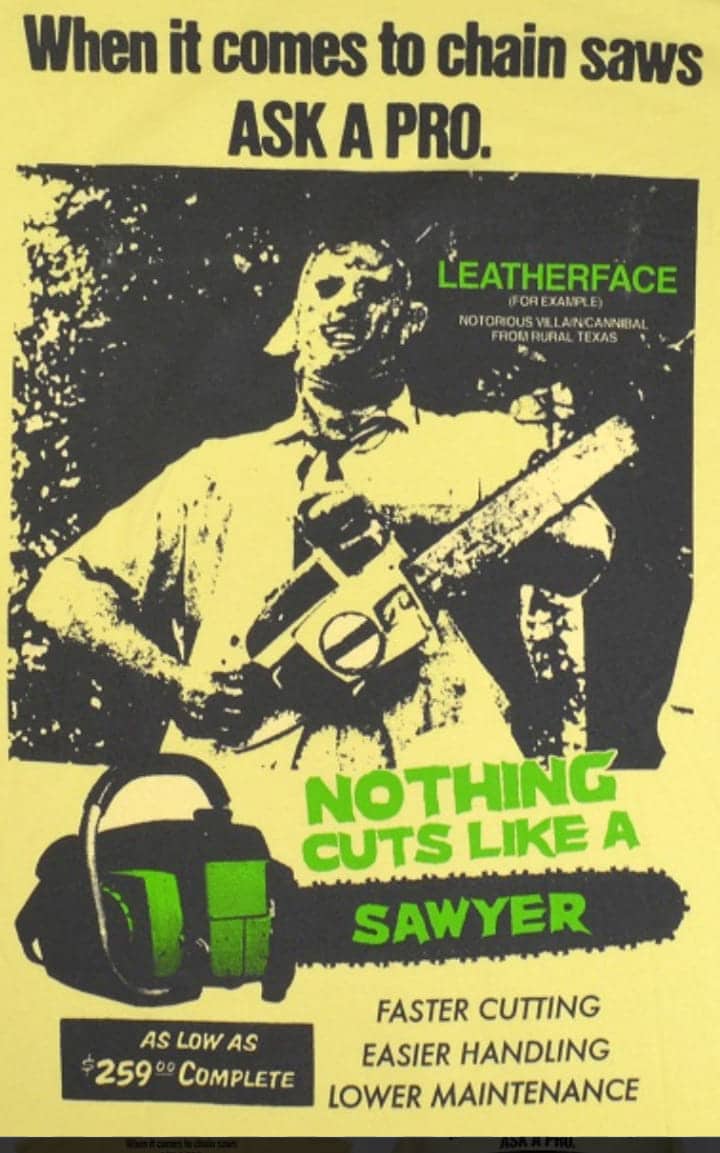 Here’s a good synopsis of the original film from Google:

When Sally (Marilyn Burns) hears that her grandfather’s grave may have been vandalized, she and her paraplegic brother, Franklin (Paul A. Partain), set out with their friends to investigate.

After a detour to their family’s old farmhouse, they discover a group of crazed, murderous outcasts living next door.

As the group is attacked one by one by the chainsaw-wielding Leatherface (Gunnar Hansen), who wears a mask of human skin, the survivors must do everything they can to escape.

So that’s what it’s about (and it’s reminiscent of the reason chainsaws were invented), but, most importantly, what chainsaw does Leatherface use in the film?

What Chainsaw Did Leatherface Use? 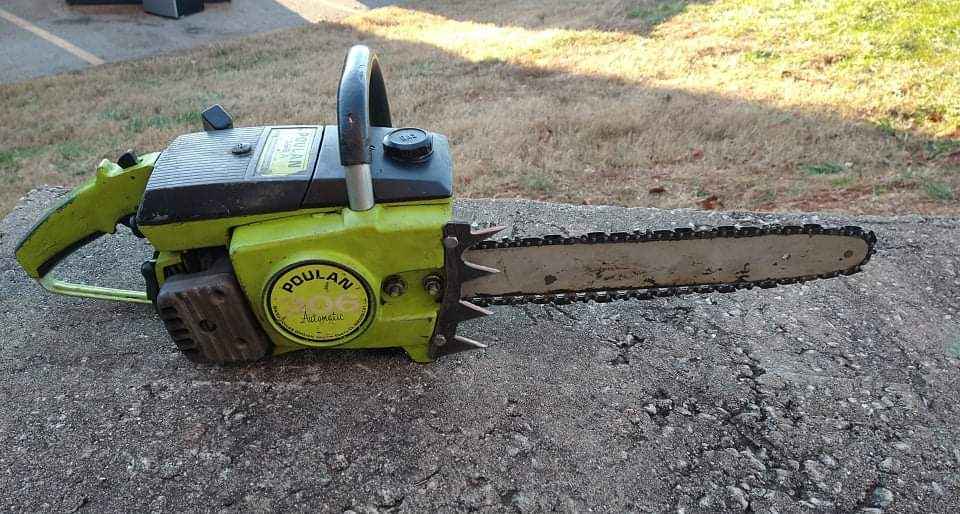 Leatherface uses a Poulan 306a chainsaw in the original 1974 film.

That’s it pictured above. It’s a classic Poulan chainsaw that is no longer in production.

At the time of writing, there aren’t even any for sale on eBay (though there are plenty of Poulan 306a parts here). If you really wanted one, you can also find them listed on online marketplaces from time to time.

It’s a reasonably light chainsaw, weighing around 12 lbs, compared with other far larger saws used in other TCM movies that are said to have weighed up to 60 lbs.

The Poulan 306a Chainsaw 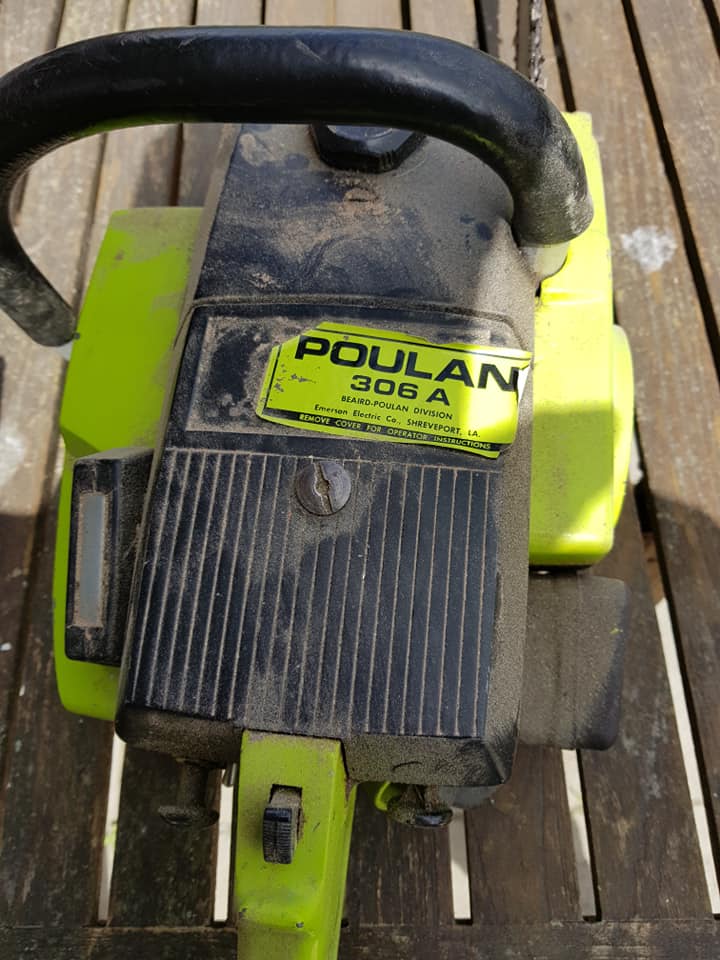 For those who are super interested in chainsaws (which I can understand and appreciate), here are the Poulan 306a specs and features.

It is a 59cc, 3.6 horsepower chainsaw that was produced between 1970 and 1980. That’s makes it a reasonably powerful chainsaw that’s great for firewood (and should not be used on humans)!

Other Poulan 306a Chainsaw Specs:

It had no chain brake and only a basic anti-vibration system, but its most distinctive feature is its lime green and black casing. All in all, it’s a basic homeowner chainsaw.

I have no idea if its use in The Texas Chainsaw Massacre helped or hurt sales, though they say any publicity is good publicity, right?!

Of course, there were many other films in the franchise – eight to date with more in the works.

Here are the chainsaws used in each of the Texas Chainsaw Massacre movies.

The Texas Chainsaw Massacre 2 came out in 1986. Leatherface uses a Craftsman 4300 chainsaw in this film, while Grandma briefly uses a Poulan 361, harkening back to the original TCM chainsaw brand.

The Texas Chainsaw Massacre Massacre III came out in 1990 and had one of the most recognizable chainsaws of the lot.

In this movie, Leatherface has upgraded to a custom Stihl 034 Magnum with 36″ bar (not the 066 as is sometimes claimed). The saw used in the film was not for public sale, having been produced exclusively for the movie by Paul Byer.

The saw for the third film has a great name: The Excalibur Chainsaw.

This film used a McCulloch 700 Chainsaw which you can see sitting on the table in this kill count video at the 14-minute mark.

The Texas Chainsaw Massacre released in 2003 is a remake of the original film. Leatherface uses a Husqvarna 359 with a 28″ bar in this film. It’s no longer for sale new but used models can be found for sale on eBay and other online marketplaces.

The Texas Chainsaw Massacre: The Beginning from 2006 is a prequel to the 2003 film. This film also used the Husky 359 chainsaw.

Texas Chainsaw 3D came out in 2013 and was made as a sequel to the original 1974 movie. You can get a good look at Leatherface’s chainsaw at the 12:20 mark in this video.

I’m not sure what model, but it looks like another Husqvarna chainsaw to me. Again, let us know in the comment below if you have a definitely make and/or model!

Lastly, the movie Leatherface came out in 2017. This tells the origin story of Leatherface, and yes, it includes chainsaws.

Because this is set before the original film which was set in 1974, the chainsaws used are what we’d now consider collectibles and antiques.

Unfortunately, I’m not 100% sure what the chainsaw used in this film is. Let me know in the comments below if you have it confirmed before this is updated!

There will be a new Texas Chainsaw Massacre released in 2022 – watch the trailer above!

We don’t learn a lot about the movie from the trailer – there are dark stairways, old gloomy framed family photos, and dangling meat hooks – but we do catch a glimpse of a chainsaw at the 38-second mark.

It looks like the lime green Poulan 306a chainsaw from the original movie!

Something to look forward to.

This is one of the best Leatherface Chainsaw t-shirts on the market.

I love the retro style, and yes, nothing cuts like a Sawyer!

A Funko Pop Leatherface with chainsaw figurine is another option.

I like this one because they got the lime green chainsaw right – other figurines are holding orange chainsaws (which might be based on other movies after the original, I guess).

This is a great Texas Chainsaw Massacre poster of Leatherface holding a chainsaw.

It’s not one I’d want in my own home, though to be honest, there’s no poster of Leatherface – with or without chainsaw – that I’d want on my wall.

These prop chainsaws are popular among those dressing up as Leatherface for Halloween.

They’re much lighter than the real thing, don’t have real chain teeth, and, thankfully, can’t be used to cut up much more than a slice of bread. Could they also be used as a good juggling chainsaw?

So those are the chainsaws of Leatherface for you!

There has been a variety of brands and sizes used across the 8 (soon to be 9) movies, but it’s nice to see them getting back to the original style for the 2022 release.

One has to ask – might we see Leatherface with throwing axes at some point in the future…?

1 thought on “What Chainsaw Did Leatherface Use In The Texas Chainsaw Massacre Films?”