Juggling Chainsaws And Chainsaw Jugglers: World Records And How To Get Started!

Juggling chainsaws isn’t for everyone, but WATCHING chainsaw jugglers is!

Here’s everything you need to know about chainsaw juggling, and a lot more that you don’t.

Find out who the chainsaw juggling world record holder is (he actually got in touch with us after publishing this article and shared his favorite juggling chainsaw), see different performances by chainsaw jugglers, and learn what makes a chainsaw good for juggling.

It’s not what chainsaws were invented for, but it’s certainly an interesting use for them!

Or what about this next one…?

He’s juggling a chainsaw, an ax, and an apple WHILE on an extremely high unicycle.

Obviously no stranger to danger, he finishes that off by using the chainsaw to cut the apple in his mouth. Not something I’d recommend anyone doing, and something that won’t help you pass any chainsaw safety course I’ve seen.

You can see Chayne Hultgren (the unicycle juggler) again in this next video.

And of course, he has to show the chainsaw is real again – this time by using it on an aluminum can.

He also claims he’s the only one in the world who has ever attempted this feat, something I’d be willing to accept.

As you can see, chainsaw juggling comes in many forms, and the people that do it are usually more than a little eccentric. It’s often done by magicians, street performers, comedians, and other acts like that.

Who is the best chainsaw juggler?

Ian’s record is for the most consecutive chainsaw juggling catches.

In 2019 he achieved 105 chainsaw catches while juggling.

You can see him in action in the video above juggling running chainsaws – not everyone does it while they’re running, and I think we can all agree it’s another level of cray.

He actually drops the chainsaws in this demonstration, which I imagine can’t be all that good for the chainsaw.

Chainsaw juggling isn’t Ian’s only record, he also has the record for opening the most amount of beer bottles with a chainsaw.

Here is the video of that…

What other chainsaw records do you think Ian should tackle?

How To Start Juggling Chainsaws 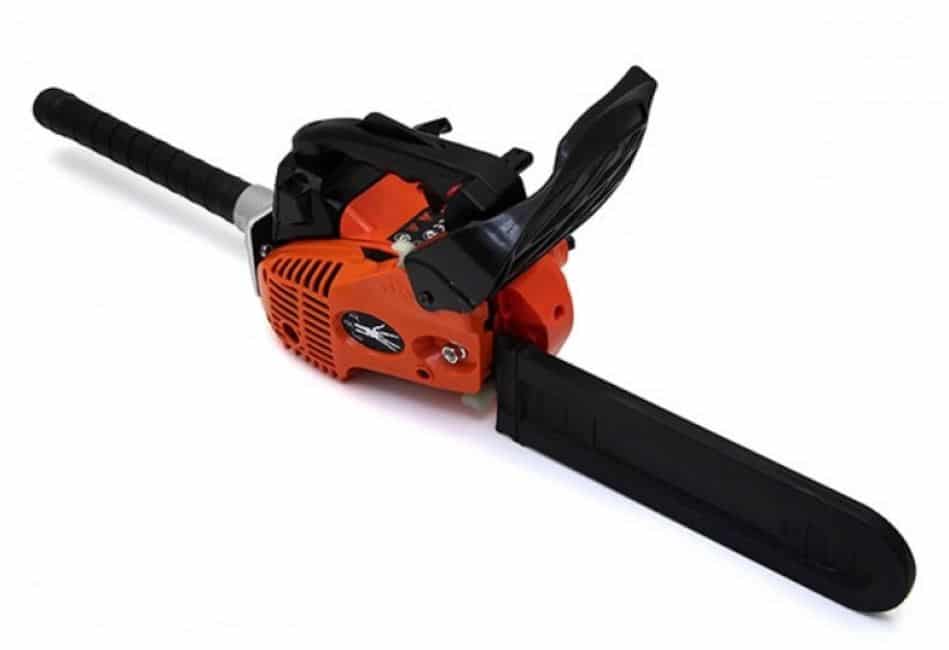 As you will have noticed, a juggling chainsaw is different from your average homeowner’s chainsaw, and far, far removed from a professional logging chainsaw.

They are also sometimes called prop chainsaws and have these features:

The toothless chain means that when the chainsaw is running, it’s still of far less risk to the performer if it does happen to get them.

It will still cut through a piece of lumber for that demonstration, but in the event of a chainsaw juggling fail, they won’t lose their fingers, hands, or arms.

Most often, juggling chainsaws are adapted ECHO brand chainsaws, or they are at least lightweight top handle chainsaws.

ECHO happens to make the lightest top handle chainsaw in the world, though it’s too expensive to buy three of them for juggling and then risk dropping to the ground and damaging or destroying.

Some chainsaw jugglers instead use adapted lightweight battery-powered chainsaws for the task. They can also stand up to a bit more damage when dropped compared with gas-powered saws. 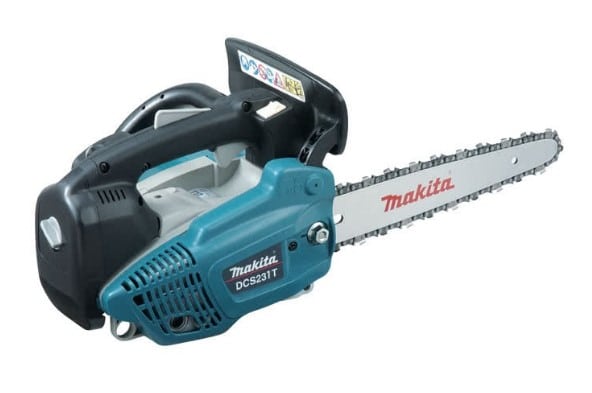 Ian Stewart, the current chainsaw juggling world record holder, got in touch with us after coming across our article.

He shared that “the most common chainsaw juggler these days is actually a Makita DCS239t.”

The Makita DCS239t is a very small 22cc top handle chainsaw. Production has been discontinued but some retailers around the world are still selling it new and you can find used models on Ebay.

[The DCS239t is] far more rugged than the ECHO. The ECHO is lighter, but the Makita is just a solid saw. The ECHOs break very fast with the weak spot being the on/off switch. But, both are great saws!

So, if you’re looking at getting into chainsaw juggling see if you can find one of these small Makitas before going for an ECHO – advice that comes from the foremost expert!

There are other small Makita saws out there, like the 7-pound XCU06Z, but it’s a battery-powered saw that’s probably more prone to breaking.

What does juggling chainsaws mean?

It literally means juggling chainsaws – throwing them in the air so that at least 1 or 2 are in the air at a time.

It’s usually done as a stunt or other form of entertainment at fairs, circuses, for TV shows, or on the street. Instead of juggling balls, the performer uses juggling chainsaws.

What is the world record for chainsaw juggling?

Canadian man Ian Stewart has the record for most consecutive chainsaw juggles at 105. This was achieved on the 6th of September 2019 in Nova Scotia, Canada.

Where can I find chainsaw juggling gifs?

Personally, I’d say they are about equal.

Or course, as we shared above, there are people who do both… at the same time!

Perhaps start with axe throwing first and see where that leads you!

The only chainsaw records I’m going to be setting are imaginary, especially when it comes to juggling.

Chainsaw juggling isn’t for the faint of heart, so start off with apples like a normal person. Work your way from there to small cats (they always land on their feet), and you could consider chainsaws after that.

Finally, check out the world’s longest chainsaw bar for another interesting chainsaw record set by a small town in Michigan, or, these chainsaw memes are also worth a bit of time!

4 thoughts on “Juggling Chainsaws And Chainsaw Jugglers: World Records And How To Get Started!”