Are Tanaka Chainsaws any good? How do they compare to other chainsaw brands?

Tanaka saws are less popular and less well-known now than they have been in previous times, but they still have many fans out there.

They are difficult to find in the US these days but are more common in other parts of the world. There are plenty for sale in parts of Europe, for example.

Amazon used to sell them in the US, but they no longer appear to do so. The best spot for both new and used Tanaka chainsaws in America is here on eBay – there’s always a changing variety.

If you’re considering buying a Tanaka chainsaw, here’s a bit more info to help you make a decision. 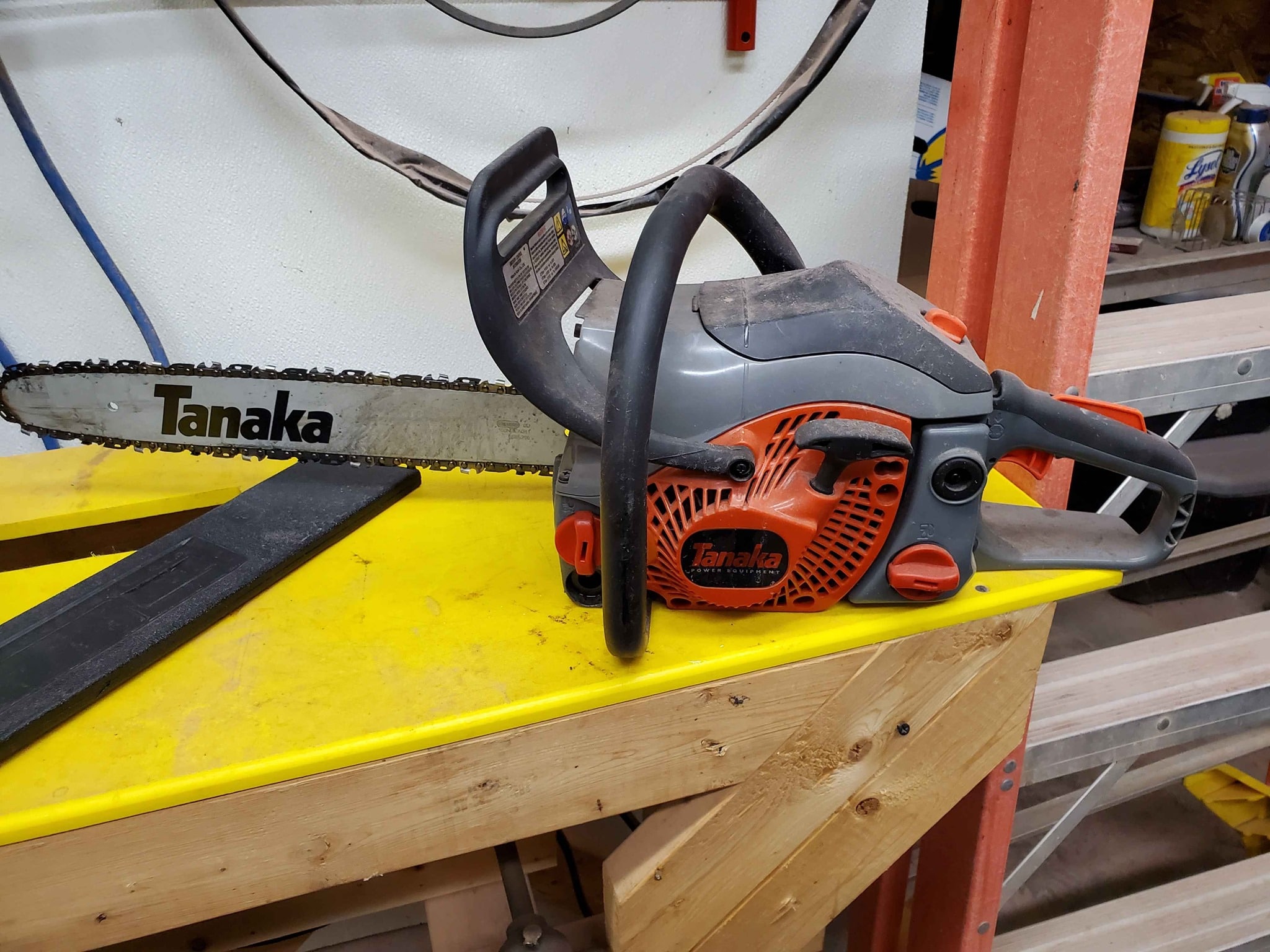 Tanaka saws are not the cheapest chainsaws on the market by any means.

Just take a look at the Amazon bestselling chainsaw list for examples of much cheaper saws. Tanaka brand chainsaws are not the cheapest because they offer much more than bottom-of-the-barrel chainsaws.

Their manufacturing is on a higher level, the features are right up there, and the ease of use is good. They are comfortable saws to use, well-balanced, and powerful.

If you look at the wide range of second-hand Tanaka chainsaws for sale on eBay, you will see there are many very old, well-used saws that are still going strong.

Here’s an idea of what’s available on eBay at the time of writing:

And there are many, many more, both used and brand new Tanaka chainsaws, as well as all the parts you might ever need.

We’ll take a closer look at the TSC51EAP

The Tanaka TCS51EAP is one of the most popular Tanaka chainsaws.

It is a 50.1cc chainsaw, similar to my Husqvarna 450. It has a commercial-grade purifier engine which ‘provides clean, powerful performance with less fuel consumption.’ Most modern chainsaws say this though!

It comes with a 20-inch bar and chain, but there is sometimes the option to grab a 16 or 18-inch one instead. If you’re only going to be using it around the home, this could be better.

It is marketed as a ‘commercial’ chainsaw, which presumably means it could be used as a forestry or loggers chainsaw.

However, in my opinion, you would be better going with a Husqvarna, Stihl, or even one of the more powerful ECHO chainsaws such as the ECHO CS 590 (a very popular saw).

This saw is great as a homeowner or farm use chainsaw, but it would struggle to go all day every day, even though it has the ‘PureFire Engine.’

The Tanaka TCS33EDTP is another popular model from this brand.

It is a 32.2cc top handle chainsaw with Tanaka’s Pure Fire Engine. It comes with a 12-inch bar – the recommended size for the model.

The features are basically the same as the TCS51EAP listed above, it’s just a lower-powered saw.

The main difference besides this is that this one is a top-handled saw. This makes it good for arborists working in the trees and homeowners pruning trees and shrubs. 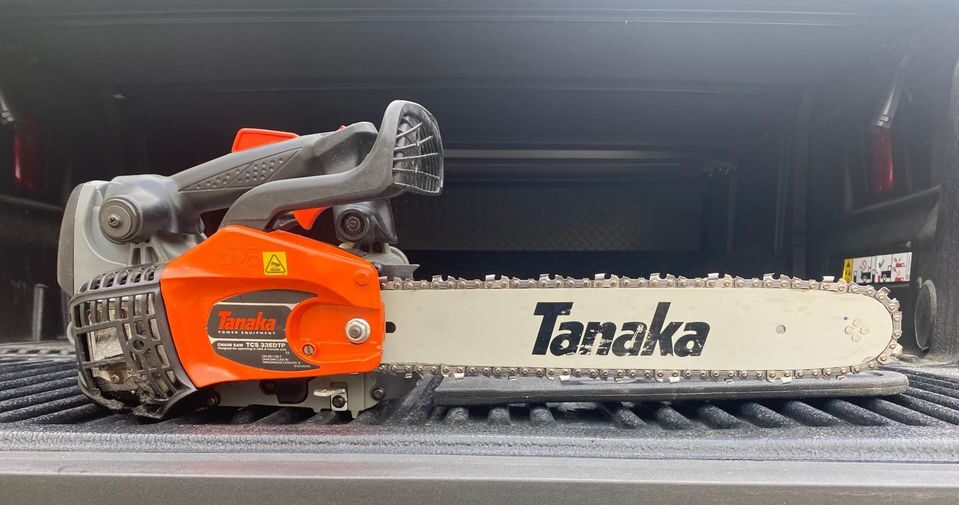 Where is the best spot to find parts for Tanaka chainsaws?

First of all, I recommend you take a look at HL Supply.

Just enter ‘Tanaka’ in the search box and it’ll come up with a bunch of compatible parts from spark plugs, bars, chains, and more.

If they don’t have what you need, here on eBay is the next best spot.

You will more than likely find what you need there, from entire Tanaka chainsaws available for parts to oil pumps, carburetors, and cases.

And, if even eBay doesn’t have what you want, I’ve found success in the various chainsaw Facebook groups. There’s always someone with an old saw lying around that can be used for parts!

As you might have guessed by the name, Tanaka is a Japanese company.

However, you can’t always reply on guesswork like that – if you also asked ‘where are ECHO chainsaws made‘ the answer is also Japan. However, the word ‘echo’ is decidedly not Japanese!

Anyhow, Tanaka was founded back in 1918 as an ironworks and began producing small engines in the 1950s. When it began this work, it was making engines for mopeds and motorcycles, rather than power tools.

Tanaka chainsaws first came onto the scene in the early 1970s with their first model the ECS-5 (37cc). They also began manufacturing other garden and home tools at this time as well.

Here are when the different chainsaw models originally came out:

Ownership of the company has changed hands multiple times over this period and it is currently owned by Hitachi Power Tools. 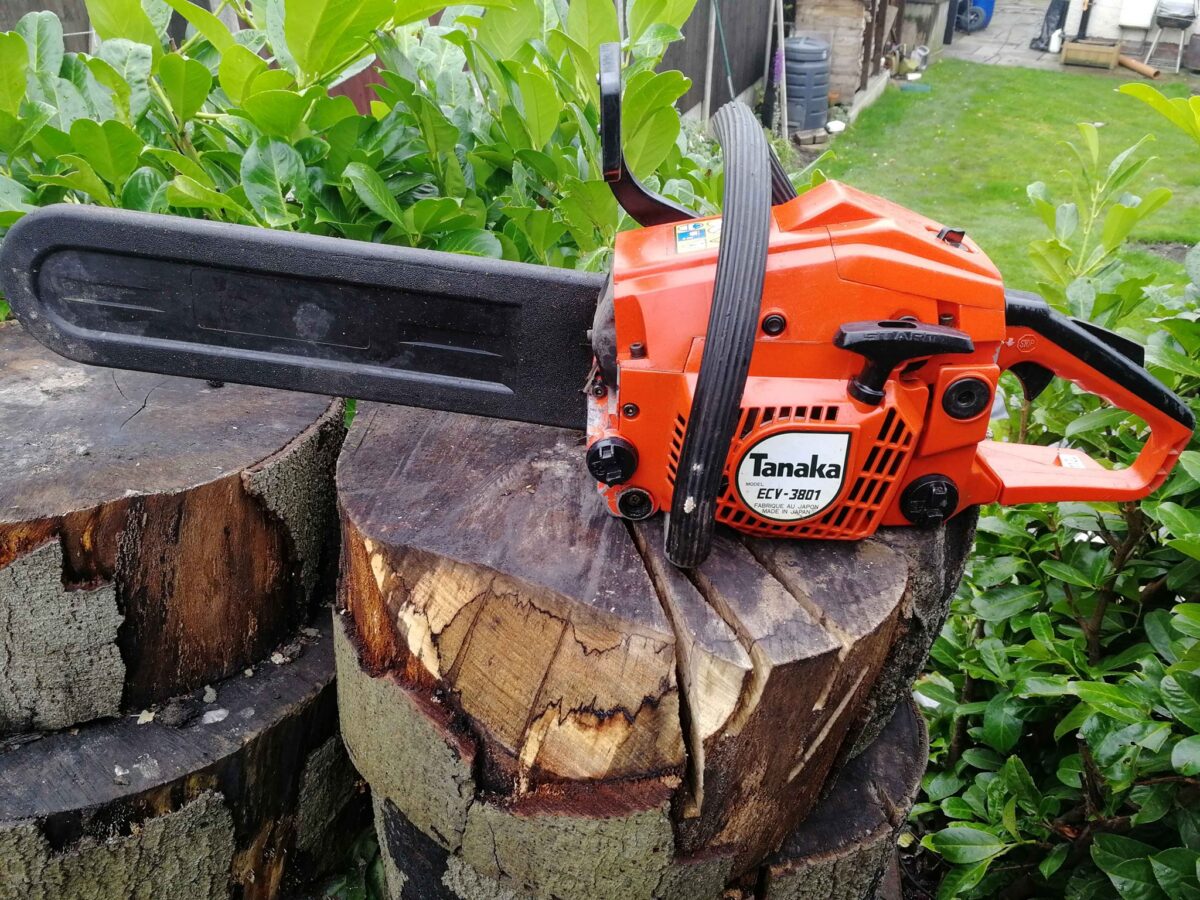 The Hitachi Power Tool Group owns the Tanaka Power Equipment brand and manufactures saws in China. They not only sell chainsaws but also other power tools like line-trimmers as well.

Where are Tanaka chainsaws made?

The Tanaka brand is mainly manufactured out of China, while offices are located in Japan.

Overall, this company did produce good saws in the past. With proper care, they would last many years and were helpful homeowner chainsaws.

They were never on the same level as Stihl (if you’re wondering about Stihl Vs Tanaka), but they were a decent saw in its price range.

If you come across a second-hand model for a good price and you know how to check if it is still running well, don’t be afraid to grab it. They make for good pruning and light clearing saws and the more powerful models are good for firewood.

It can be a real mix bag.

Most people are perfectly happy with their Tanaka chainsaw, but if you read the Amazon reviews, others are less than impressed.

For the price, I would generally recommend getting a comparable Husky or another premium brand – even if it’s a good used model.

However, if you’ve had a Tanaka before and have been happy with the price and performance, there’s no reason not to jump in again. Let us know what your experience with Tanaka chainsaws has been like in the comments below.

Chainsaw Storage Ideas: How To Store And Winterize A Chainsaw Correctly