The NEW Stihl MS 162 Chainsaw has been released for sale in Germany.

It’s slated for release in the US, UK, and other parts of the world in early 2023.

The MS162 is a 30.1cc gas chainsaw that is described as “a reliable entry-level machine for both property maintenance, gardening, and landscaping.”

Here’s what we know about it.

Continuing on from Stihl’s description above, they state:

Whether you’re sawing firewood or trimming fruit trees, the MS 162 is suitable for a wide range of applications.

Or this synopsis (translated from German):

As a private user, the STIHL MS 162 petrol chainsaw is always the right choice for you when it comes to cutting firewood or maintaining your property.

The MS 162 is a light and robust chainsaw for occasional use. Even felling smaller trees is possible with this reliable chainsaw.

There are two different 162 models: 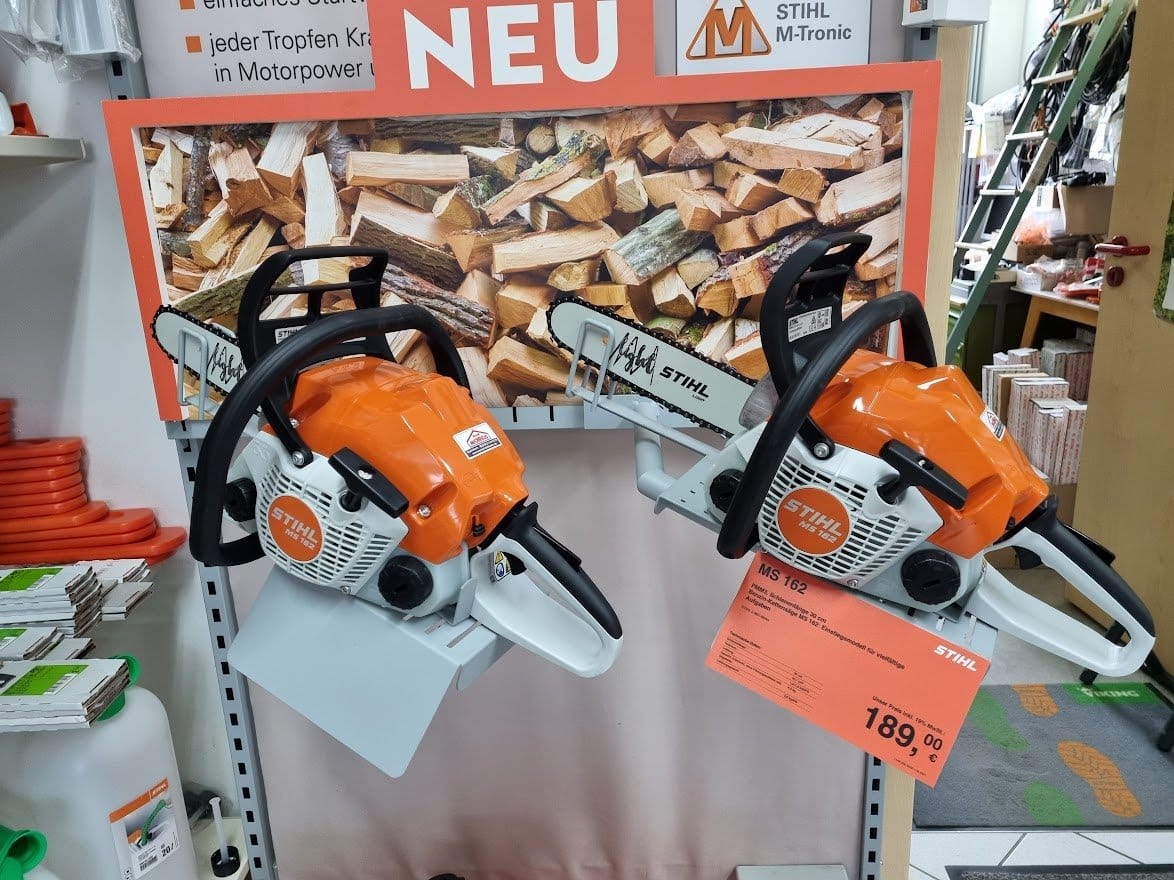 The difference between the two is that the latter has the comfort features B and E.

The additional features are:

Some people like these comfort features while others much prefer their saws without them.

Personally, I can take them or leave them. These saws are easy enough to start with the Easy Start feature, and it’s no hassle to tighten the chain with tools. Also, I’ve heard a few bad reports about faulty or troublesome Quick Chain Adjusters. 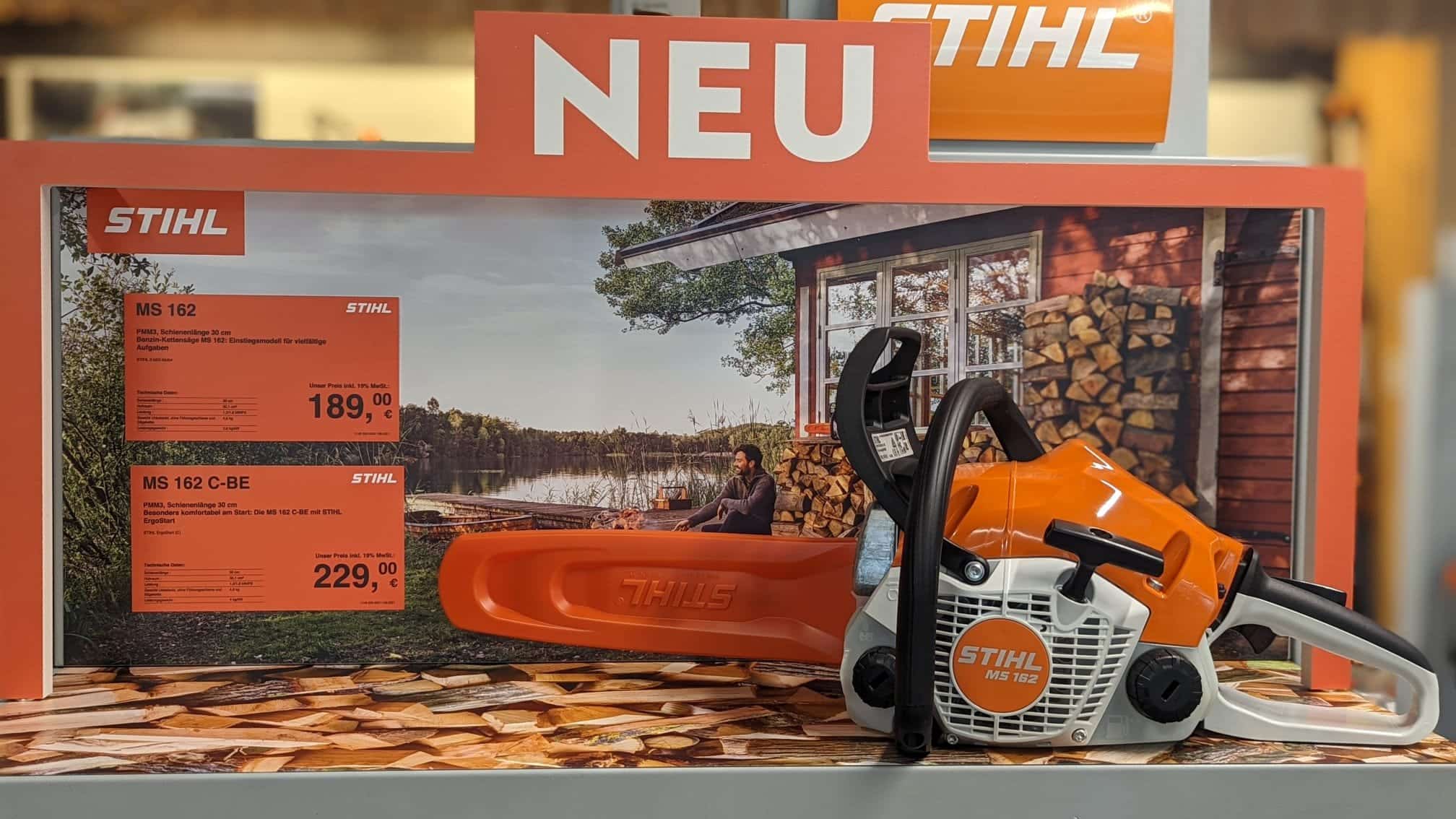 The price difference between the two versions is 40 euros, though these are introductory prices that are subject to change.

They are all cheap lightweight homeowner pruning saws. They’re not high-powered and they are used with small 12 – 16″ bars.

It’s difficult to even see the need for the 162 really, as it’s so similar to other Stihl saws, but it does have slightly less power than even the 170. 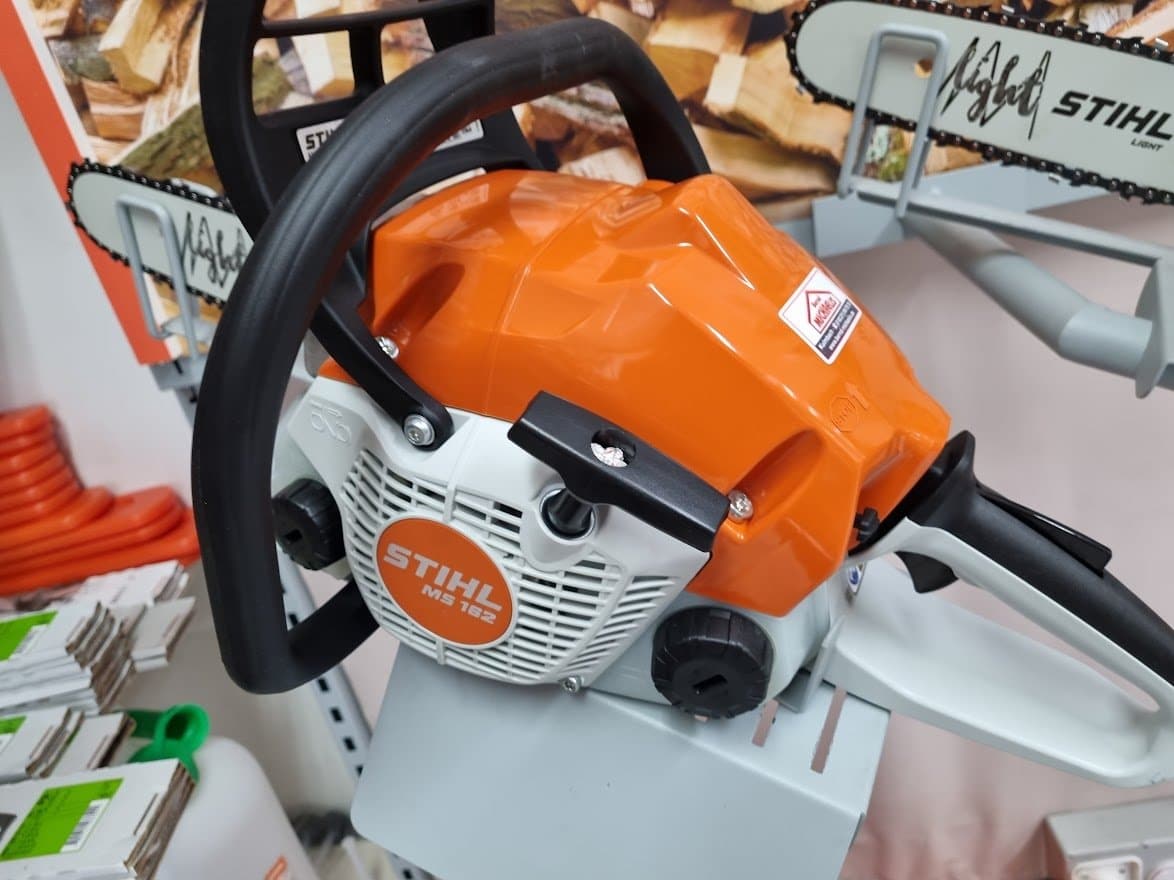 Not everyone will love the Stihl MS 162’s features.

I’m not sure about the fuel tank lids for one thing, and the single bar nut is an unpopular feature common to some of the worst Stihl chainsaws.

And it’s said to have a powerful energy-efficient engine – but I guess the powerful part depends on what you’re comparing it to.

If it’s compared to the Stihl GTA 26 mini saw, then yes; but if it’s to Stihl’s biggest chainsaws, then no!

The intro prices in Germany are:

The US dollar and Euro have reached parity in recent times, so at the time of writing it’s about the same price in US dollars.

However, if it’s going to be a German-made model then it will likely cost a bit more after shipping (Husqvarna recently added a 6.5% surcharge on all products).

When the MS 162 is released in the US and the rest of the world it could also be part of an intro Stihl deal – hopefully!

So that’s basically all I can find out about the 162 right now – those who can speak German can find out a bit more in the few YouTube reviews that are available.

Lastly, here are a few comments from around the web on the 162:

There was this exchange about whether or not it was Mtronic:

My guess is that it’s a pro saw with an mtronic option. So a better build quality for one. Not knocking the 170, but they’re a homeowner design.

The list price on Germany page is 189 euros which is about 225 US. And I have never seen that “easy” chain tensioner crap on a pro saw. Same goes for the “easy start” crap. First time someone forgets a saw has that junk and tries to start it like a regular saw, the whole system is stuffed.

I’m a pro-saw proponent but I have been impressed with the 170. I know a few tree companies that use them as part of their fleet and get 18-24 months out of the running every day with no major work required.

And I can confirm the 162 does not have an Mtronic option.

I think this comment kind of sums up the saw:

Let me know your thoughts about this new Stihl chainsaw release in the comments below.

Juggling Chainsaws And Chainsaw Jugglers: World Records And How To Get Started!