The Stihl 023 is a 40cc light use homeowner chainsaw from the Stihl 1123 Series.

It was manufactured between 1990 – 2002, making it one of the last ‘0’ chainsaws to be produced before the MS range took over.

The 066 was in production until 2003, and the 09 Mini-Boss until 2006, as examples of 0 series saws that went longer, but you can see all the Stihl chainsaw production years here.

I checked out a friend’s Stihl 023 chainsaw – whose 12-year-old son regularly uses it – which you can see pictured throughout this post. 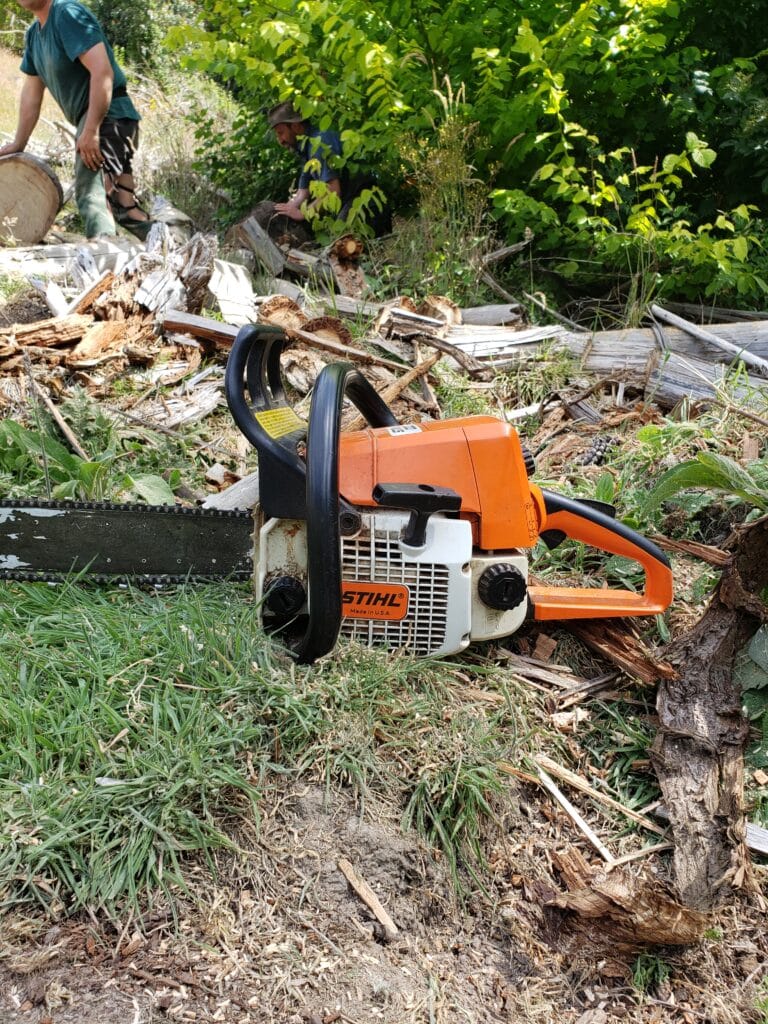 The 023 was described as ‘compact’ and ‘for demanding occasional users’ in the marketing material.

My friend, who inherited it from his aunty’s cousin’s husband’s father’s mom on his wife’s side (or something like that), said it’s alright but doesn’t have a lot of guts.

It’s good for his son to start learning how to use a chainsaw. 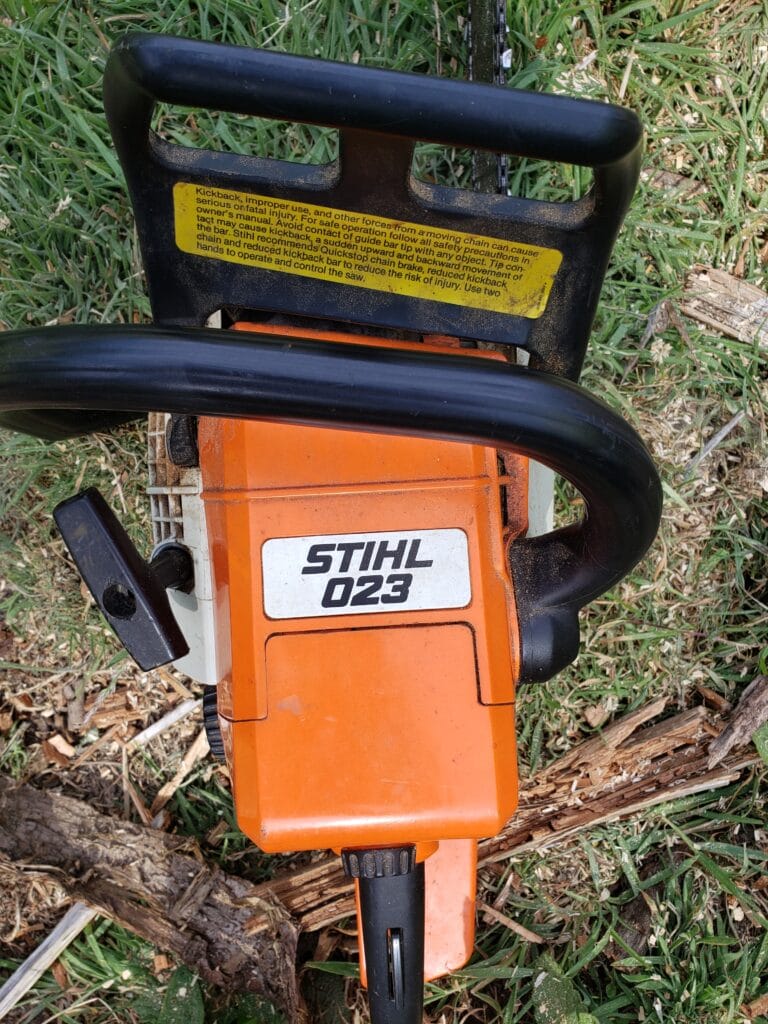 However, personally, I probably wouldn’t go larger than a 14″ bar, just so you’re still getting enough power.

It’s a decent little saw if you use it for what it was designed.

You can see a lot of the Stihl 023 C specifications in this screenshot from Stihl’s old website (differences between the base model and C model below).

See how the 023 compares with other Stihl saws in its class.

You can see some of the features that come standard or can be retrofitted.

A lot of people also ask what the C means on Stihl chainsaws, and this table helps to answer that as well.

The C stands for ‘Comfort’.

Those 2 additional features that come standard on the 023 C are the comfort features on that saw (which change from model to model).

In the case of the Stihl 023 C it does add a little bit of weight to the saw, but only a few ounces. 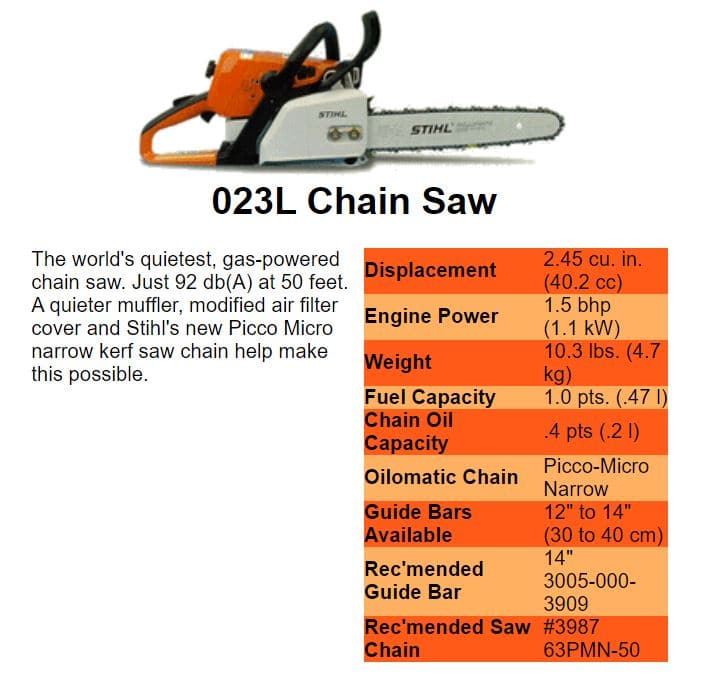 There is also a Stihl 023 L chainsaw.

The L stands for Low Noise.

At the time when this saw was being sold, it was the world’s quietest gas-powered chain saw (only 92 dB(A) at 50 feet). 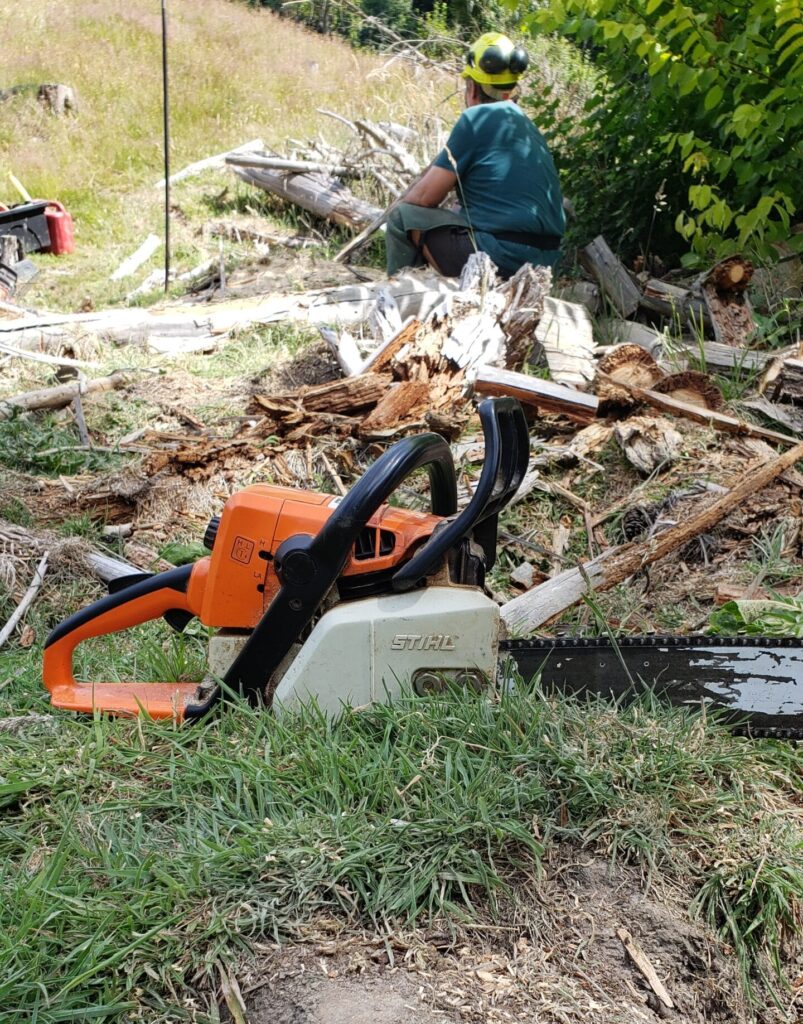 There’s a lot of price variation on old Stihl saws, and that’s no different with the 023.

You can pick them up for next to nothing from people just wanting to clear out space in their garage, or you can spend a whole lot on a well-maintained barely used model on eBay.

It’s going to come down to a few factors:

As far as where to find parts for the Stihl 028, there are a number of good spots, but OEM is expensive.

Ebay often has entire old chainsaws that can be picked up cheap for parts – many of these saws can even be repaired by the right person.

In this video of the Stihl 023 running, you can see that it’s a bit sluggish while cutting through some birch.

However, this saw is good for this type of thing – just slowly and patiently cutting up thinner width logs. It doesn’t chew through them like a pro chainsaw, obviously, but it gets the job done. 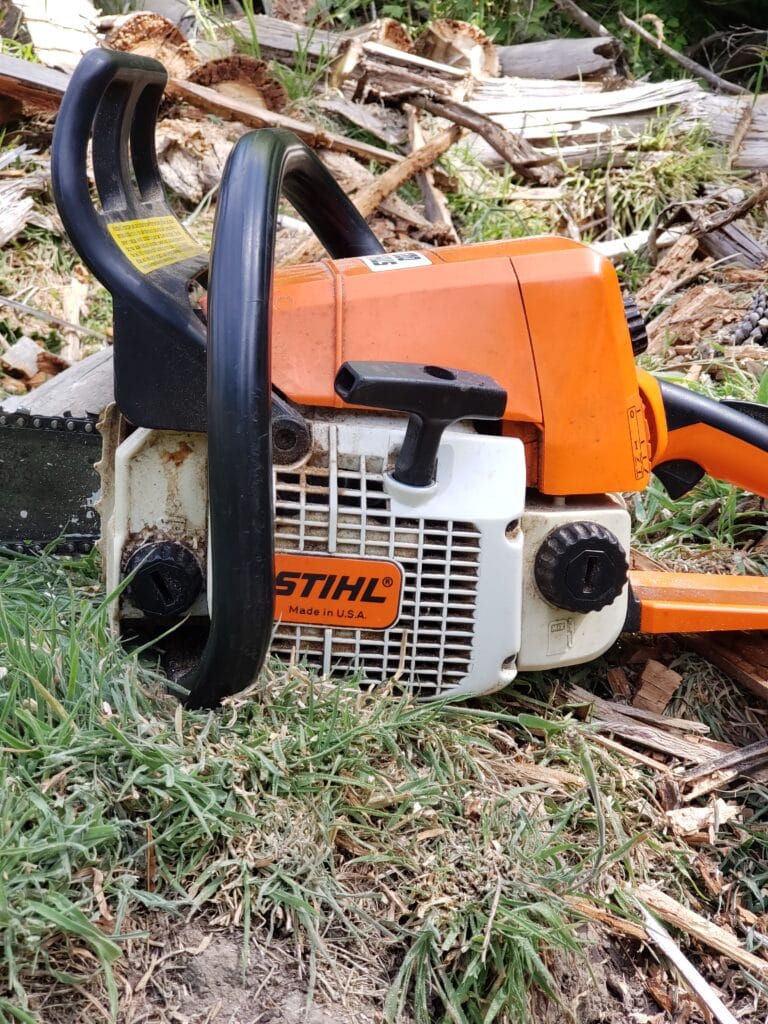 This model was made in the US, as many Stihl saws are (especially those which are sold in the US).

It’s got easy access to the fuel and oil tanks. 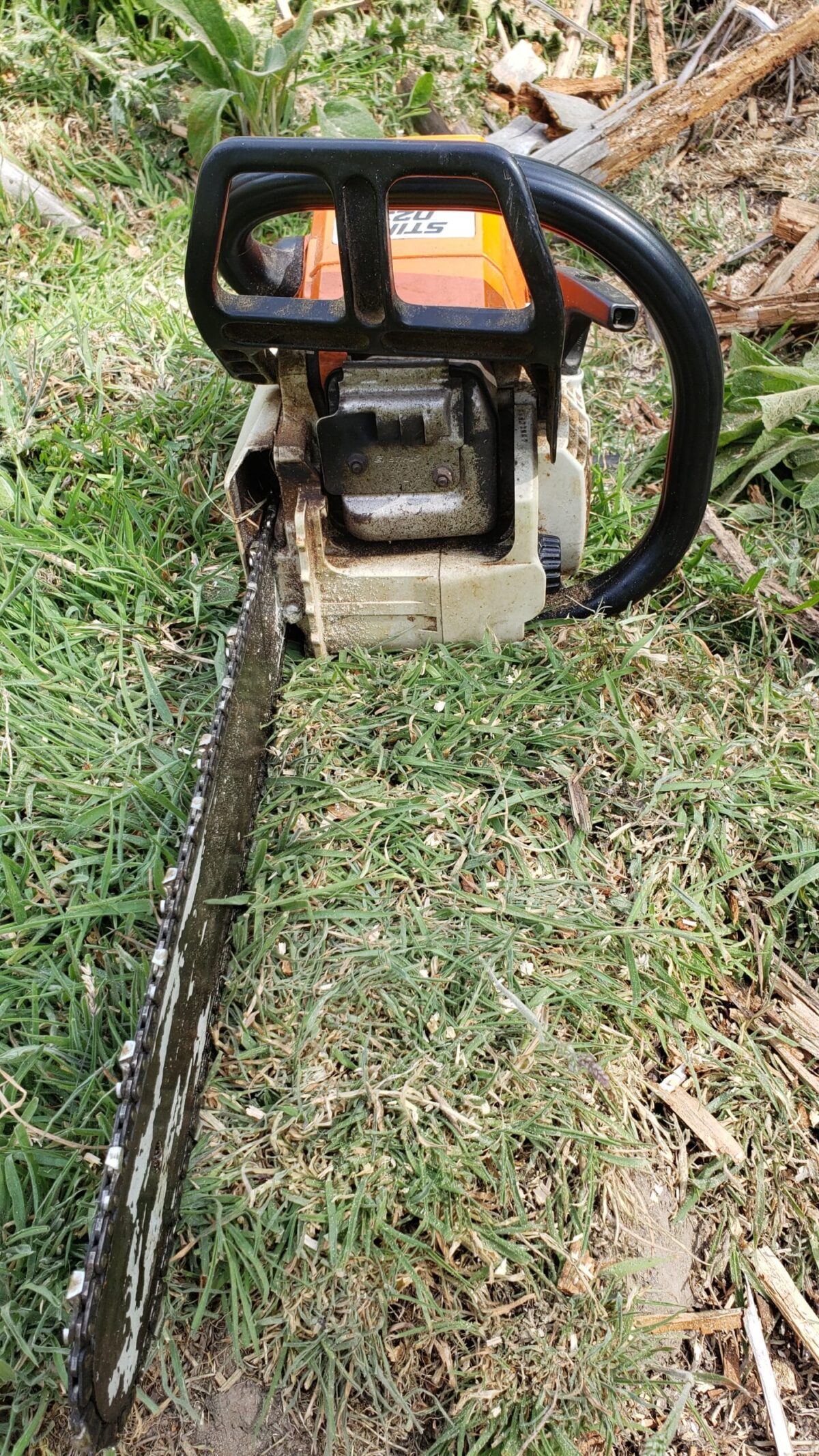 Overall, the Stihl 023 is a good little chainsaw for around the home, for limbing and pruning, and all of those lighter tasks you need done.

Or, as my friend uses it for, as a chainsaw for older children (with the proper training and supervision).

If you find an 023 for sale at the right price, it’s worth picking up – if only for adding to the collection! 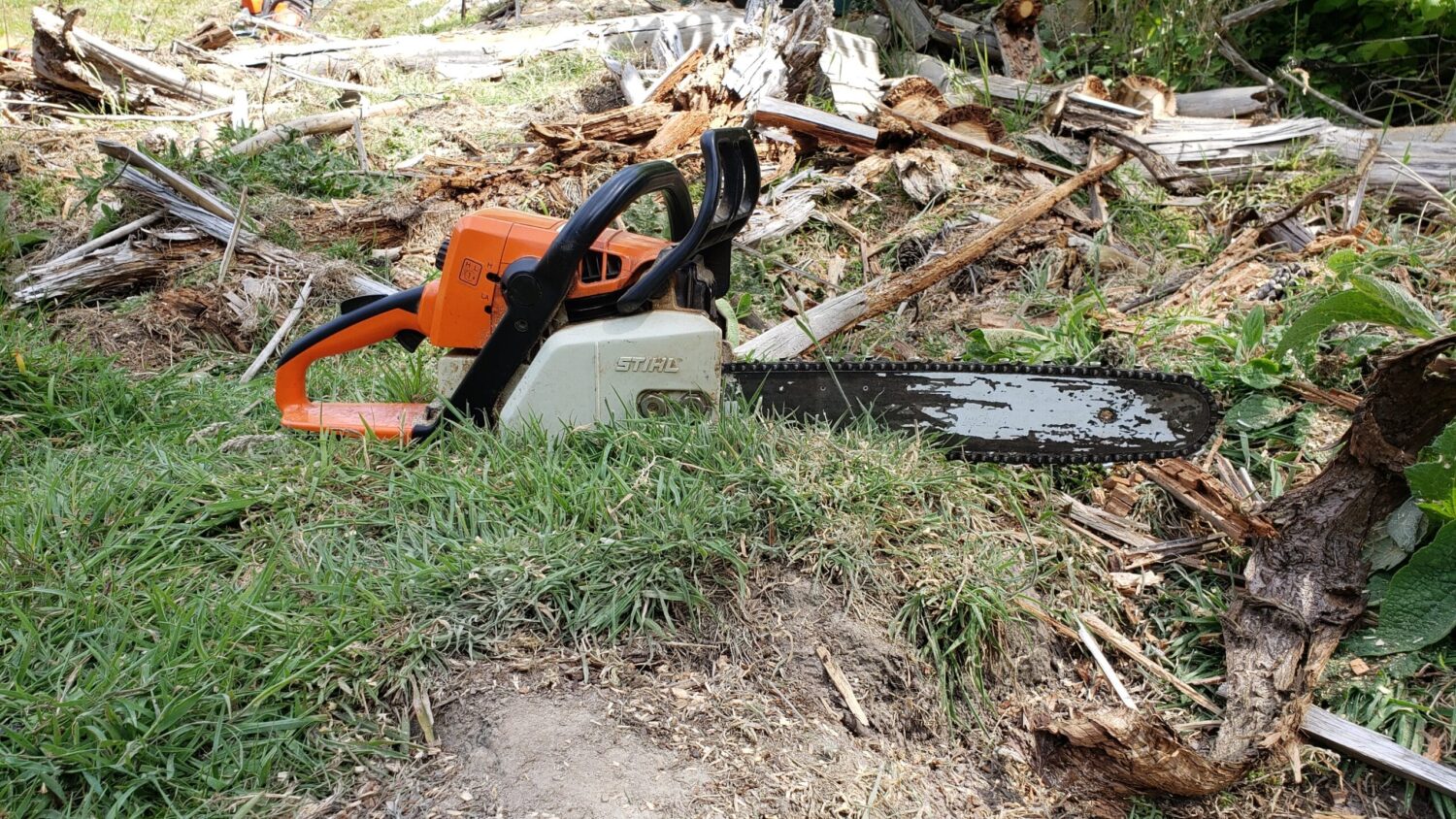 At the right price, it’s a good chainsaw to have on hand and is worth picking up.

The Stihl 028 is another chainsaw from the same era that has a bit more guts if that’s what you’re looking for.