Chainsaw Accidents And Injuries 2021: Be Prepared And Stay Alert

Chainsaw accident is generally something you do not want to Google – especially in an image search.

On the other hand, it can be good to get a healthy dose of reality to better respect and take care around chainsaws.

Accidents happen all the time, and they happen so quickly. Thousands of people are injured by chainsaws around the world each year. Unfortunately, too many are killed.

I want to share a little bit about chainsaw accidents in this post so that we’re all better warned and better prepared.

Chainsaw accidents happen for a range of reasons.

Go into any rural community and you can hear plenty of first and second-hand accounts of those who have been injured by either electric, battery, or gas chainsaws (though, anecdotally, gas is by far the biggest culprit).

My family and I were at a local farmer’s house for lunch a number of weeks ago and started talking about saws. He had just been to visit a friend who almost lost his life in a chainsaw accident up a tree recently.

The man’s son had been able to get a tourniquet on the arm injury quickly and rush him to meet an ambulance as soon as it happened. Thankfully they were not far from town at the time of the accident.

The farmer’s cousin told a story of her brother who had his face opened up by a chainsaw.

The poor man basically had the lower half of his face removed. However, as we were told, the surgeons did a good job and despite never being able to close one eye again you could hardly tell anything had happened.

It’s more common for people to be injured by trees and tree limbs while using chainsaws, rather than the chainsaws themselves.

It’s so important to know the dangers and risks of making certain cuts and be aware of where trees and limbs are going to fall.

This includes whether you’re felling trees with a chainsaw or just pruning branches with something like the Limbinator Limbsaw.

Every story is different, and we’re going to share some more in a minute.

The common reasons for chainsaw injury and death, however, is inattentiveness, inexperience, and being ill-prepared.

Chainsaw kickback is a big cause of accidents.

This is the sharp, sudden and unexpected movement of the chainsaw, often upwards towards the face. It happens when the tip of the saw (the kickback zone) hits something it shouldn’t, is pinched, or used incorrectly.

I recommend you see our full article on the causes and prevention of chainsaw kickback to gain a full understanding.

Chainsaw safety gear prevents a lot of injuries, and a lack of appropriate gear is the cause of many.

You don’t have to be wrapped up like a knight in armor to use a chainsaw, but there are some essential pieces that can save your life in the case of an accident.

The basic safety gear that you should have whenever using a chainsaw includes:

There is other chainsaw injury prevention gear that is less frequently used.

Especially if you are working with a chainsaw alone, it’s best to kit up in every type of chainsaw protection possible.

Collecting firewood or getting a tree out of the way isn’t worth your life.

In the US alone there are over 30,000 injuries relating to chainsaws each year.

Here are some examples of recent chainsaw injuries and accidents that have made the news.

9news reports that a man suffered significant blood loss after cutting his neck and shoulder with a chainsaw in Sydney, Australia.

The Blue Mountains Gazette reports that a man was flown to hospital after a forearm injury from a chainsaw.

CNN reports on a man who was rescued by a postie after accidentally cutting himself with a chainsaw in Norwalk, California.

CBC reports on a chainsaw kickback leg injury caused by one man to another who was standing nearby in Grand Falls-Windsor.

The Washington Post reports on an increase in chainsaw injuries as opposed to sports injuries since the start of the COVID-19 pandemic.

Chainsaw injuries can cause terrible damage and leave many disfigured or missing limbs.

Make sure you use the right chainsaw safety equipment to protect yourself and those around you.

I even cut my hand with a mini chainsaw recently which was an excellent wake-up call.

Chainsaw deaths are reasonably rare, but they happen.

Here are some examples of chainsaw death in 2021 that I share in the hope it makes all of us more cautious and prepared when using our chainsaws.

If your loved one is mentioned here and you would like them removed, please contact us, and we will do so immediately.

Kent Online reports that Matthew Ovenden, 35, died from loss of blood while working with his chainsaw alone in Canterbury, UK.

Online Athens reports that Anthony Mazerika, 78, died after an injury to the throat from a chainsaw kickback incident in Madison County, Iowa.

Public Opinion Online reports that Harold Stouffer, 74, died while using a chainsaw after a tree struck him in the head in Lurgan Township, Pennsylvania.

News24 reports that Yunus Pillay, 17, died after suffering an injury to the chest from a chainsaw in Pietermaritzburg, South Africa.

Newstime reports that Stephen Caciopoli, 33, died after receiving a neck injury from a chainsaw while attempting to cut up a tree in Newtown, Connecticut.

It’s essential you wear the correct safety gear and it’s always recommended to work with a partner. There is a much greater chance of survival if you are not alone.

Also, most towns will have a chainsaw shop that runs chainsaw classes. Everyone should do one when starting out. 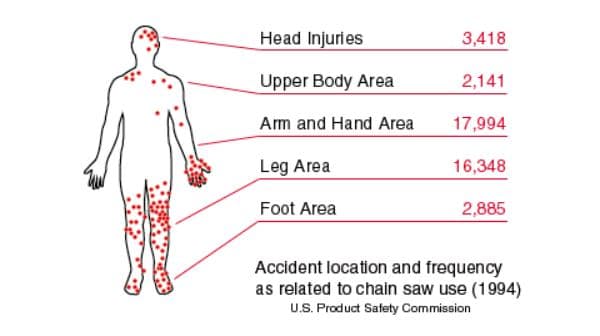 Chainsaw injury statistics are hard to come by, but can usually be found on government health and product recall pages.

In the diagram above, you can see which parts of the body are most likely to be injured as a result of a chainsaw accident. While it’s older data, no doubt the ratio would be fairly similar today.

The Pfanner Protos Arborist helmet is one of the best on the market for preventing head injuries.

For those who want the ultimate protection, check out the BaSt-Ing VinZent back protection device – it might be a bit full-on for most!

It’s recommended to look up each country’s injury stats to find the data for your region.

I hope this has helped remind you of the dangers of chainsaws – always remember to stay alert when cutting and be prepared for the unexpected.

If you haven’t yet done so, make sure you take a chainsaw safety training so that you’re aware of the dangers and know how to assess hazards.

What Is Chainsaw Kickback? What Causes It And How To Prevent Accidents

Husqvarna 141 Chainsaw Review And Specs: Is It Worth The Rebuild?

4 thoughts on “Chainsaw Accidents And Injuries 2021: Be Prepared And Stay Alert”