Axe throwing is becoming an increasingly popular pastime and sport.

If you’re new to axe throwing competitions or want to take your skills to the next level, check out these frequently asked questions to shed some light on why axe throwing is becoming more popular.

*Make sure you check out our round-up of the best WATL throwing axes as well!

Whether you want to get into axe throwing as a hobby or you want to try it out professionally, you’ll have plenty of questions.

Throwing axes are easy to order online, along with axe throwing targets – or, you can even make your own!

The above video is really helpful for getting a complete overview of WATL axe throwing rules, but we’ve also got the answers to the most frequently asked questions here.

The introduction of a standardized ruleset helped people take a fun and stress-relieving pastime and set the groundwork for a world-renowned professional sports community.

Competition throwing axes is now broadcasted on CNN, and retail brands like Nordstorm sell artisan axes for people to buy.

Is axe throwing a real sport?

The world axe throwing league (WATL) has guidelines for:

The WATL hosts the competition axe world championship every year and other smaller leagues for competition throwing axe enthusiasts.

Is axe throwing an Olympic sport?

The competition throwing axes scene has not reached the level to qualify as an Olympic sport.

There is regional axe throwing leagues in states with bigger cities, like Chicago and New York.

Professional axe throwers exist as many WATL axe throwing contests reward winners with cash prizes, and the axe throwing competition community aspires to compete on an Olympic stage one day.

When did axe throwing become a sport?

Axe throwing has been a sport throughout much of history and was once famous as a part of lumberjack competitions in the 1940s.

These logger sports competitions started as workers in lumber caps sought to compete to find out who the best lumberjack was.

The modern era of axe throwing sport came about in 2006 after Backyard Axe Throwing League was formed.

Is there money in axe throwing?

Yes, there is significant money to make in axe throwing competitions.

Because axe throwing is popular with young people, there is money in starting an axe throwing party business.

What should I wear for axe throwing?

You should wear comfortable clothes that allow your arms, shoulders, and legs to use a full range of motion.

You should avoid fitted clothing that is restrictive, and you should also prevent open-toed shoes so that wood splinters don’t get into your shoes.

Also, people sometimes drop their axes by mistake, so if that happens, you don’t want to drop an axe onto an exposed toe.

No competitive axe throwing is not very expensive.

Axe throwing tournaments don’t have expensive entry fees, and the most significant expenses for axe throwing will be acquiring your axes and the travel fees to travel between tournaments.

WATL axe rules state that axes have to have a certain quality for people to be allowed to use them in competition.

The cost to practice axe throwing is inexpensive as well.

Can anyone join an axe throwing competition?

Some axe throwing leagues are open to the public, and some higher-level competitions require someone to qualify before they can compete.

You can also simply start privately competing with friends to get improve your skills and get experience.

Are there different axe throwing leagues?

The WATL is the global governing body for axe throwing, but there are different leagues in many areas of the world that focus on a local level of competition.

Most leagues feature head-to-head competition, and some are split duals leagues and big axe leagues.

What is the best competition league?

The best competition league is the WATL.

They are the organization that sets the standards for things like WATL axe specs and axe throwing target dimensions that the other leagues use as a standard.

How do axe throwing competitions work?

Axe throwing competitions are a series of ten throws per person where the highest scoring player wins.

Each contestant will make five throws each before switching sides and making another five throws.

These throws are scored based on the rings of the target that the axes hit. These ranges will give a value between one or six points.

Two 8-point markers can be hit for extra points called kill shots. A player attempting to hit these kill shots must call out their intention and hit the kill shot marker for the kill shot to count correctly.

Depending on the league and seriousness of the competition, someone will record the scores of each player and upload them to allow them to qualify for future higher-level competitions.

What is a perfect score in axe throwing?

The best score someone can achieve in axe throwing competition is 64 points.

People can achieve this score by hitting the bullseye area worth six points a total of 8 times and hitting the kill shot markers, which are worth 8 points each.

Before attempting to score an 8-point kill shot, the player must make clear that they intend to hit the kill shot. Accidental kill shot throws don’t count.

This rule is similar to billiards, where the player must call out which ball they will hit and which pocket they will end up in.

What are axe throwing targets made of?

Axe throwing targets are made of medium hardness wood that will allow the axe to stick without degrading too quickly.

Hardwoods are bad materials for axe throwing targets because the axe will have trouble biting. Softwood is also bad because the target will not last long if the axe can bite too easily.

Many axe throwing target makers use pine and spruce to make their throwing axe targets.

How far do you stand for axe throwing?

When someone is axe throwing, they will stand 12 feet away from their target in a straight throwing line.

A professional axe throwing target will have a backstop and a sidewalk to contain the axe after it gets thrown, so it has a lower chance of flying off somewhere.

How many axes is an axe throwing game?

How many axes are thrown in a single game will depend on the type of game the competitors are playing.

There will be a series of ten throws between the two competitors in a standard one-on-one matchup where the total number of points earned determines the victor.

What size are competition throwing axes?

Competition throwing axes have to adhere to specific qualities.

The axe head can only weigh up to two pounds. The length of the axe must be at least 12 inches.

Some different leagues and competitions allow bigger axes that have distinct standards.

WATL sell a huge range of competition axes that can be used in the leagues.

When you’re just practicing at home or in a local club, you can play around with different types of non-approved axes. Double bit axes, for example, can make things a little more interesting!

People play 21 axes, much like the card game blackjack is played.

The scoring zones on the axe throwing function normally, but the game’s goal is that the player needs to hit a score of 21 exactly.

Along the way, the player or players will need to agree on three numbers that they need to also score precisely on their way to 21.

For example, someone may choose 7, 11, and 16 as their numbers. The player will then have to make their score exactly seven before moving to 11 and then to 16.

Any throws that would “bust” the player or send them over their score number are not counted.

How many people are in the world axe throwing league?

The world axe throwing league has over 275 members in 22 different countries.

Thanks to international axe throwing day, the number of locations, countries, and members continues to grow.

Does axe throwing make you sore?

Many people who try out axe throwing for the first time will report intense soreness on the day after they throw axes.

Axe throwing works out the upper body, including:

A strong axe throw will utilize the movement of the legs to shift the weight of your body into propelling an axe forward with great force.

Despite the implied dangerous nature of throwing axes, people are still drawn to them.

As long as someone participates in a professional and safe environment with axe throwing, injuries due to casual or competitive environments tend to be uncommon.

Who is the best axe thrower in the world?

The current world champion of axe throwing is Mike Philabaum.

He was followed in second place by Michael Theadoru.

The 2020 season was canceled for reasons that shall remain nameless. 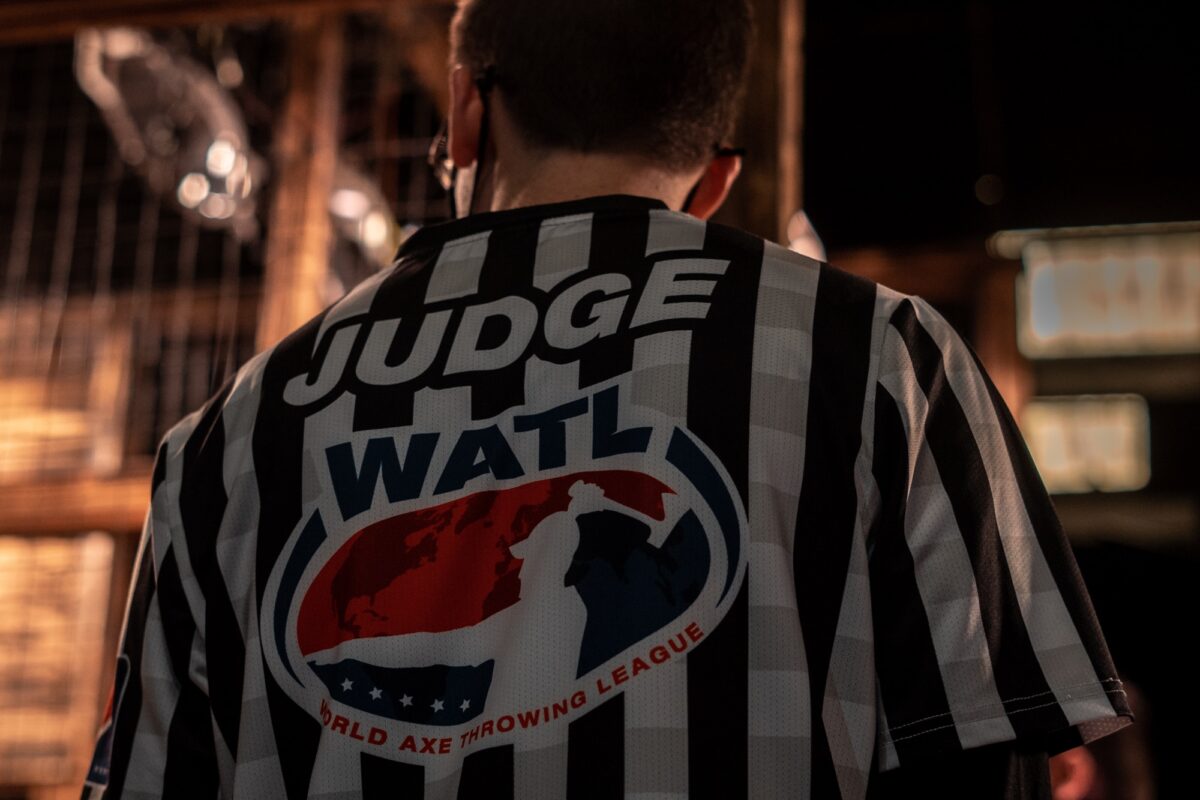 The best way to start getting involved in axe throwing competitions is to join or start a local club.

Get connected with your nearest axe throwing league and find out what’s involved in taking things to the next level.

Who knows, you might win the next axe throwing championship!

Let us know if you have any questions in the comment section below, and check out all the different kinds of axes – how many do you think could be thrown effectively?