The company was founded by German man Emil Lerp who invented the first chainsaw for tree work in 1927.

In 1975, Dolmar merged with another German company, Fichtel & Sachs. As you can guess, this is where the ‘Sachs’ part of the old name Dolmar Sachs came from.

These days, the company is owned and run by the well-known Japanese company Makita. They bought Sachs Dolmar in 1991, dropped the ‘Sachs’ portion, and continue to produce gas chainsaws under the Makita label today.

So, Makita makes Dolmar chainsaws, but where exactly they are made is a little less clear. They have 10 manufacturing plants around the world in countries like Germany, China, Brazil, and the US. However, it’s not public knowledge what power tools are made where.

It’s likely that the more powerful saws over 60ccs are still made in Germany, but the less powerful homeowners saws are made in China.

That’s who makes Dolmar chainsaws today, now let’s get into a little bit of the history!

Emil Lerp produced the first-ever gas or petrol chainsaw for tree work in 1927.

It was a powerful 8 HP chainsaw, pictured above, and was called the Dolmar model A. It was a massive 128 lb or 58 kg 2-man saw for logging.

Emil ran a competition to name his first chainsaw. He wanted something short and sweet that could be easily used in other languages.

Martha, Emil’s wife, was the one who suggested the name Dolmar after Dolmar Hill in Thuringian Forest, Germany where the saw was first used.

Because Emil was born in Thuringia and holidayed in the Dolmar Hill area growing up, the name was an immediate hit and his wife won the competition.

Emil initially called his company E. Lerp & Co. and began manufacturing the saw in Hamburg. However, after the Dolmar model A proved successful, he decided to name the entire company Dolmar.

This was a year after Andreas Stihl invented the first electric chainsaw in 1926. The first gas-powered Stihl saw came out in 1929.

However, neither of these men actually invented the original chainsaw. This honor goes to a couple of doctors who produced a chainsaw-like device for aiding women in childbirth.

Nevertheless, both Emil Lerp and Andreas Stihl were innovators and can be rightly considered the inventors of the modern chainsaw for cutting down trees and processing wood.

The model CL, which came out in 1939, was probably their best-performing early chainsaw. It was “far ahead of its time” and ended up being used all over the world. It had a long production run of almost 30 years.

All along, Dolmar were innovators and their saws were constantly improving.

One example is the model CF that came out in 1958 with an all-position diaphragm carburetor. This meant the saw could be used at all angels. And in 1987, they released the first injection carburetor on a chainsaw.

The earliest Dolmar logo may also make you think of modern Stihl saws that have the model numbering system that includes MS. MS stands for Moto Sagen which is the German word for chainsaw.

A final fun fact about Emil is that he lived from 1 January 1886 – 1 January 1966 – it’s remarkable that he came into the world and left it on the same day of the year!

Many people still refer to Dolmar chainsaws as Sachs Dolmar.

Like Dolmar, Fichtel & Sachs also has a long history of inventing, producing, and patenting things like bicycle hubs, bearings, and other mechanical parts.

The first saw released under this new partnership was the KMS 4. It was the first chainsaw with a rotary engine (the SACHS Wankel rotary engine).

Sachs Dolmar chainsaws were produced between 1975 and 1991 and many of these saws are now very collectible.

My neighbor has a model 115 from the late 80s that belonged to his grandfather. Although the saw is not currently going, it has been used extensively and is still treasured.

When Makita bought Sachs Dolmar in 1975, the ‘Sachs’ part of Sachs Dolmar was dropped. While I can’t find any official information on this, I imagine this was because Makita bought the chainsaw arm of Fichtel & Sachs, but not the whole business or the name.

On one timeline of Makita’s history, they put it like this:

Makita did manufacture and sell gas/petrol chainsaws prior to the buy-out, but they improved their offering afterward.

Makita® 2-Stroke engine technology is engineered for efficiency. The Makita® 2-Stroke Chain Saws combine a high power-to-weight ratio with easier starts and lower vibration for a full range of applications.

With the combined legacy and engineering experience of Dolmar GmbH, the world’s original manufacturer of gas chain saws, Makita offers an expanding line of chain saws for professional, farm and ranch, and occasional use.

You can see the best Makita chainsaws in our round-up post. All of their tools are reliable, durable, and most importantly, powerful.

While they aren’t quite in the league of Stihl chainsaws or Husqvarna chainsaws, they are close enough and not quite as expensive. Most of the saws are considered professional-level, and there are many strong options. 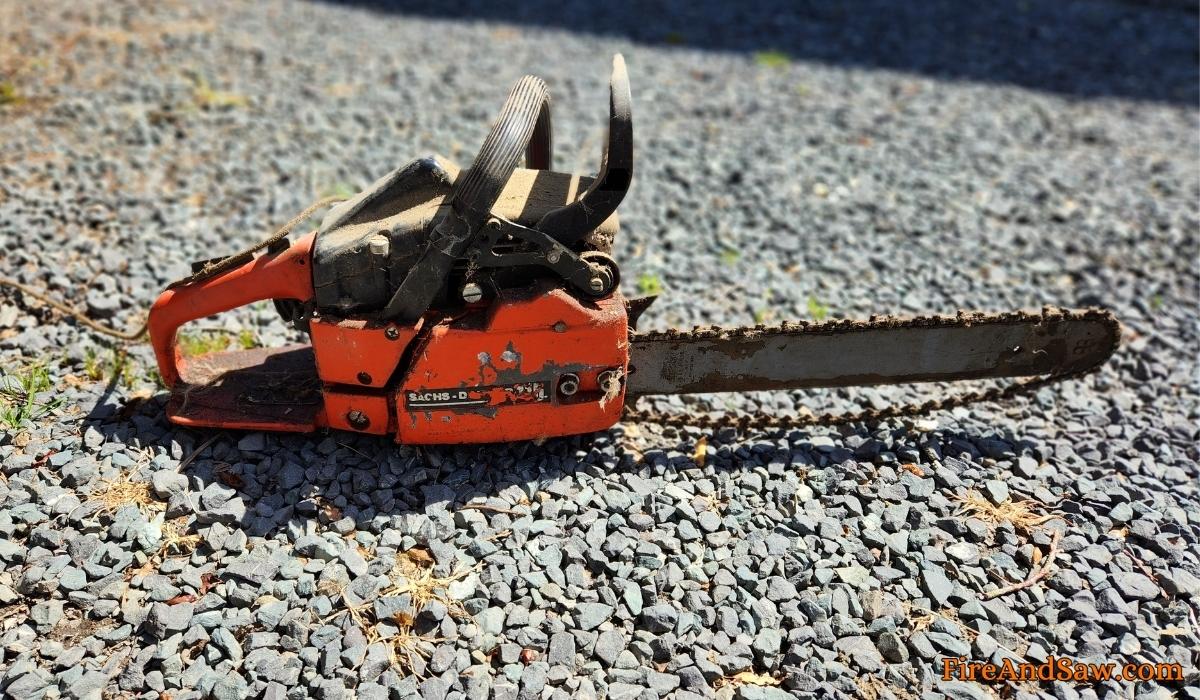 What happened to Sachs Dolmar chainsaws?

Sachs Dolmar was bought by Makita in 1991.

Makita continued to design and produce chainsaws with the ‘Dolmar standard,’ but they dropped the SACHs name.

Today, other than in some European markets, Dolmar chainsaws are sold under the Makita name.

Where are Sachs Dolmar chainsaws made?

Sachs Dolmar chainsaws were made in Germany and in other plants around the world.

It’s still the same today with the Makita-made Dolmar saws. Some are made in Germany, and others are made in China, the US, Brasil, and so on.

Pinpointing exactly what is made where is very difficult. If you work in a plant making Makita chainsaws, let us know where that is in the comments below!

Yes, Makita is ending the production of gas-powered chainsaws in 2022.

Makita Corporation , a major power tool manufacturer, will end production of engine products such as engine trimmers and engine chain saws for gardening equipment at the end of March 2022. Announced in 2 days.

In order to concentrate management resources on mainstay rechargeable power tools and gardening equipment, for which demand is expected to increase in the future. Annual sales of engine products account for less than 2% of total sales (less than 10 billion yen).

Their battery and electric chainsaw lines will continue.

They ceased to exist in 1991 when they were bought out by Makita, though there is still a healthy second hand market for the saws.

Are Makita chainsaws made in China?

Makita does have a manufacturing plant in China, and it is more than likely that some of their chainsaws are built there.

Many of the old Dolmar saws – from before, during, or after the SACHS era – are still extremely popular.

For example, check out this video on YouTube from a guy who clearly loves and respects these saws. If you have or come across an old Dolmar, it’s likely to be worth something to someone.

Finding parts can definitely be a problem, especially in some parts of the world, but where there’s a will there’s a way.

It’s unfortunate that Dolmar chainsaws never really took off in the US. From what I’ve heard others say, they didn’t market their product enough, or their marketing wasn’t effective.

Now, the Stihl, Husqvarna, and ECHO chainsaw brands have all the attention and it would be difficult for anyone else to really get in.

Even though Makita has good distribution and sells through many big box stores, and on Amazon, they don’t have the prestige of the best professional chainsaws.

Let us know if you have any questions down below, and drop any comments on the topic whatsoever. We’d love to hear your experiences with Dolmar, Sachs Dolmar, or Dolmar-inspired Makita chainsaws!