How Does A Smokeless Fire Pit Work? Solo Stove VS Breeo Fire Pits!

How does a smokeless fire pit work?

They let you enjoy an evening around a backyard fire pit without the hassle of dealing with the smoke they put out.

You’ll never again have to keep moving your seat to avoid burning eyes or choking on thick campfire smoke.

However, there is plenty more to say for those who need to know it all. Plus we’ve got 3 of the best smokeless fire pits for you to check out below!

What Is A Smokeless Fire Pit?

The appearance is about the same as a regular fire pit, though the flames may lick higher because the fire will burn more efficiently than in another type of pit.

Smokeless fire pits create less smoke from the start. Then they re-burn that smoke to get rid of almost all the fuel particles that are left. This re-burning process ensures the air flowing out of the pit is as smoke-free as possible.

A smokeless outdoor fire pit does put out some smoke, but it reduces the amount enough that you might not notice it.

You can get copper fire pits or cast iron fire bowls, or they come in a range of other material constructions as well. 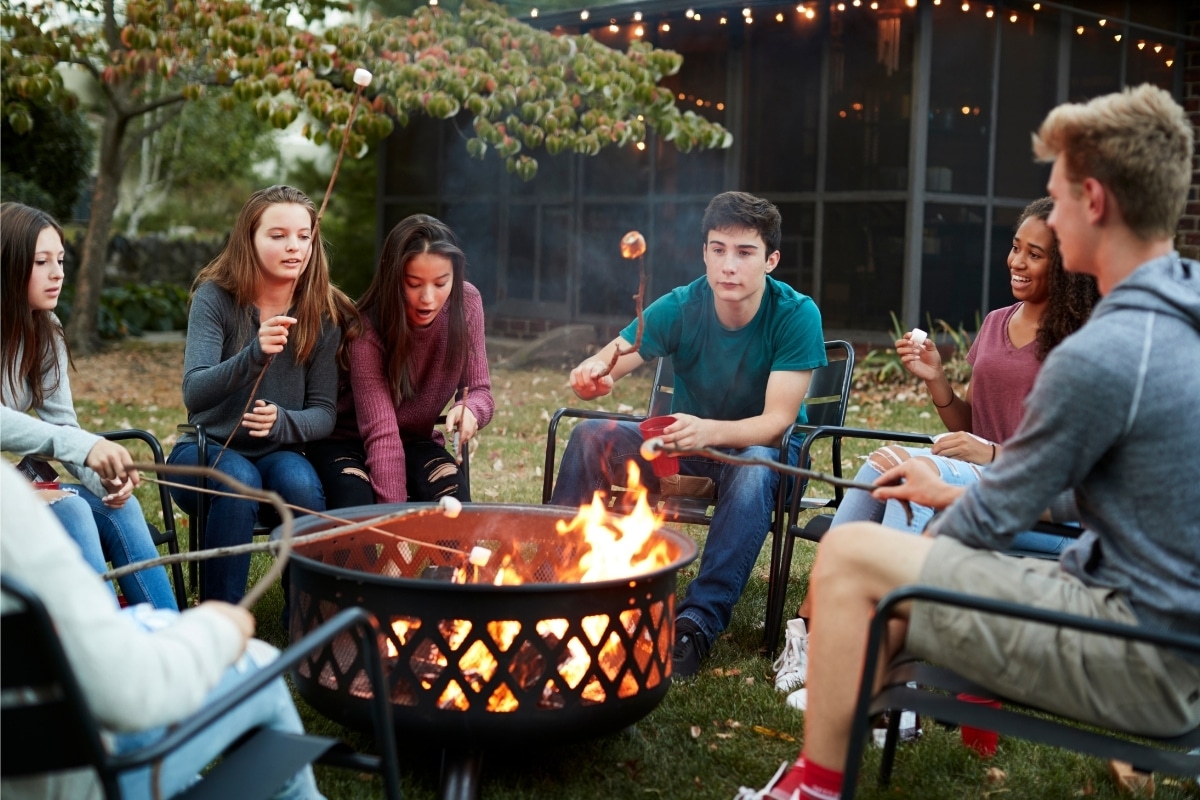 Smokeless fire pits work as long as you’re not expecting them to be 100% smoke-free.

It’s impossible to burn wood without creating some level of smoke. In a smokeless fire pit, you’ll be able to burn wood more efficiently and produce less visible smoke because of its unique design.

Bear in mind, when you first light the wood, you’ll produce more smoke than the fire should for the rest of its burning time.

Once the fire starts burning and the fire pit heats up, the design will do its job and keep the smoke at bay.

How Does A Smokeless Fire Pit Work?

The design of a no-smoke fire pit allows cool air to enter the bottom and rise to escape out of the top.

These fire pits typically have an outer wall and a second wall inside to create a gap between them for air to flow through.

Convection pulls smoke in between the outer and inner layers of the wall as the hot air rises.

Smoke is re-burned in what’s known as secondary combustion so that the air escaping out of the top is as smoke-free as possible.

A low burning temperature makes a smokier fire, too. If the wood in your fire isn’t burning completely in a hot, oxygen-fed fire, the wood material that’s left creates dark smoke and soot.

So, how do smokeless fire pits work?

The oxygen that’s pulled in through the bottom ensures enough oxygen for a good, hot burn that doesn’t leave much material unburned. Smoke is pulled into the gap between the inner and outer walls, superheated because of the efficient fire, and re-burned.

Do Smokeless Fire Pits Give Off Heat?

Your smokeless outdoor fire pit will give off more heat than a regular fit pit because wood burns more efficiently due to the oxygen flow under and around the fire.

The flames will also reach a higher temperature than a fire not burning as efficiently.

You’ll be able to smell the fire but to a much lesser degree than you would a regular fire smell.

You won’t wrinkle your nose the next day when you smell your clothes because there shouldn’t be enough smoke to make you smell like a campfire.

Any smoke produced will be re-burned in the wall of the fire pit. This re-burning means there will be fewer smoke particles to stick to your hair and clothes.

Some people won’t smell anything, while people with sensitive noses might pick up a very light but not unpleasant scent.

You can find no-smoke fire pits at nearly every price point you can imagine, so it can be hard to choose which one might be best for you.

These smokeless fire pit reviews should illustrate the main differences you might find between fire pits to help you choose one.

The Solo Stove Bonfire smokeless outdoor fire pit comes with a heavy-duty carrying case to make it easy to take it with you when you’re camping or heading to a family gathering.

The brushed stainless steel design is simple and effective at creating secondary combustion that eliminates smoke and odors.

The Solo Stove Bonfire is unique among many fire pit products in that it started as a Kickstarter campaign where it raised over $1 million to fund the production of the product.

You can purchase the Solo Stove Bonfire on its own or with accessories like a stand, shield, shelter, roasting sticks, and an assortment of fire pit tools.

The Breeo X Series 24 smokeless outdoor fire pit comes with several options for you to choose from.

The standard model is made from Corten steel that comes blue but with age develops a reddish-brown patina that gives it a rustic look.

You can also pay extra for a stainless steel model. Any type of steel fire pit can be relied upon to last a long time.

You’ll get your choice of the standard rim opening, or you can pay extra for a sear plate. The sear plate lets you cook around the edge of the fire pit opening.

This version reduces the inner rim opening and provides a wider edge that allows you to sear steaks, seafood, burgers, or whatever else you’re ready to cook up.

Breeo says this model is the right size to fit four to eight people around it comfortably, and they offer other versions of this firepit for smaller and larger crowds.

In smokeless fire pit reviews, wood pellets are a feature that can be both a pro and a con, depending on the individual user’s preferences.

Wood pellets store and can be transported easier than logs.

If you’re looking for maximum portability, this could make a great little fire pit to take along on trips or to haul into the backyard. The mini version is small enough to stick in a backpack – it might even be better than a portable propane fire pit.

The design is black, and rather than a circular outer rim, it’s a ten-sided decagon shape for a modern look.

Built-in metal handles on each side let you shake the fire pit to more evenly distribute the ash and improve airflow or carry the fire pit wherever you need to go.

This no-smoke fire pit is available in small, medium, or large.

The mini version weighs 8.5 lbs and isn’t quite as tall as a standard wine bottle. The large model weighs 34 lbs and is big enough for a group of friends or family to gather around.

The fire pit comes in two pieces: the bottom tray for ash; and the upper part where the wood pellets burn.

The INNO STAGE pit also comes with a carrying case.

The Breeo and the Solo Stove smokeless fire pits are both excellent choices if you’re in the market to buy one.

They each have pros and cons that will depend on things like:

In a standoff of the Solo Stove vs Breeo, the Solo Stove fire pit is a better choice if you want a fire pit you can take camping, to the beach, or simply move around in your backyard.

It’s lighter, smaller, and comes with a carrying case. Accessories can turn it from an ordinary fire pit into one used as a cooking fire for your next backyard, beach, or camping cookout.

Breeo wins in a Breeo vs Solo Stove showdown if you’re looking for something rustic that will be a fixture in your backyard.

The option of a sear plate rim edge designed for outdoor cooking is a nice perk, and the accessories designed for cooking make this model more of an at-home party centerpiece.

If cooking is an important feature, you might want to check out these fire pit grills before settling for one of these! 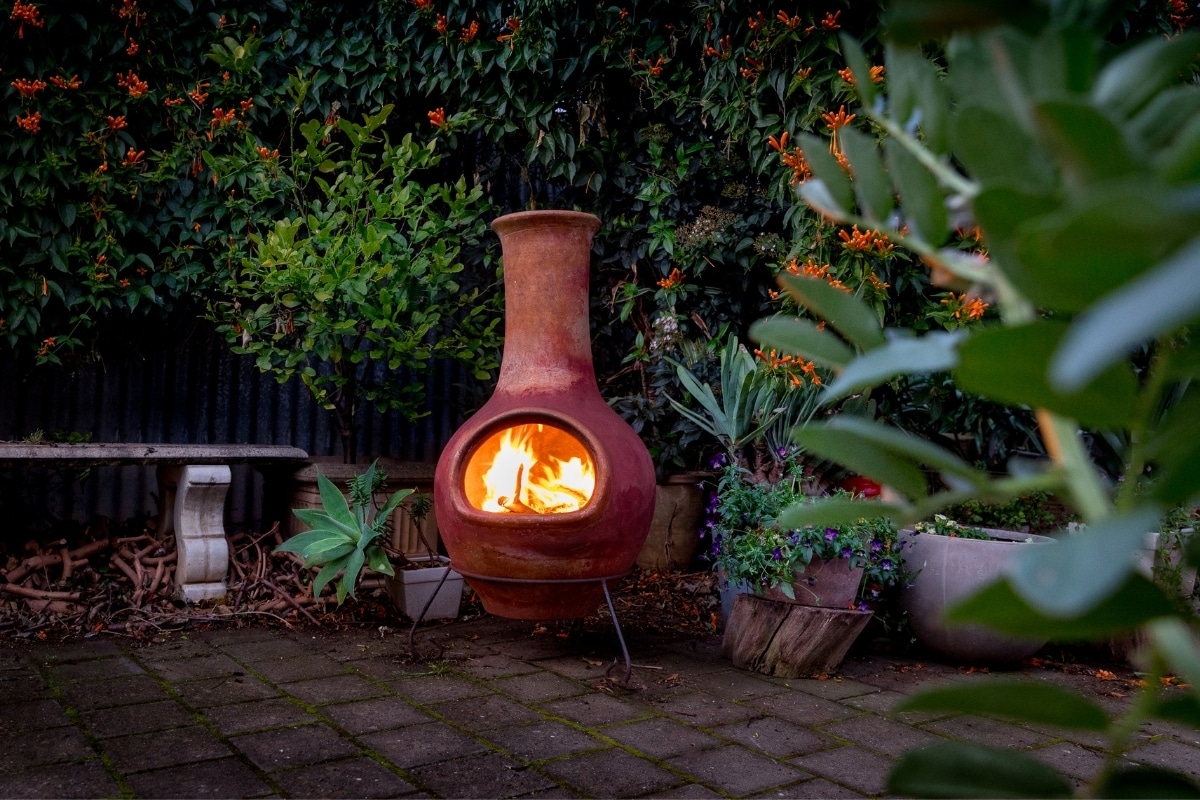 Are Smokeless Fire Pits Worth the Money?

Then they re-burn that smoke to get rid of almost all the fuel particles that are left. This process renders the air flowing out of the fire pit as smoke-free as possible.

If you’d like to avoid being inundated with smoke while trying to enjoy a backyard bonfire, smokeless fire pits are definitely worth the money. They’re typically not much more expensive than regular fire pits and offer the benefit of less smell, less smoke, and less hassle.

Can You Cook On a Smokeless Fire Pit?

You can cook on a smokeless outdoor fire pit.

Some designs have grill grates and other add-ons specifically for cooking, but they’re also suitable for sticking a hot dog or a marshmallow on a stick and holding it over the big flame that these fire pits produce.

If you’re used to cooking over a regular fire pit, plan on your food cooking faster because of the higher heat. You also might need to adjust the distance between the food and the flame because it will reach higher than flames from wood in a standard pit.

They don’t make for a good pizza oven!

Less inhaled smoke is better for everyone, especially people who have lung conditions like asthma or COPD.

Bigger and hotter flames do create a higher risk of being burned. If you follow the same safety precautions you do around any fire, you can enjoy it safely.

They’re safer outside than an outdoor electric fire pit!

What Fuel Do You Use in a Smokeless Fire Pit?

Most smokeless fire pits burn firewood. You can find outdoor stoves that burn everything from charcoal briquettes to sawdust bricks, but they’re designed for their specific fuel type and probably aren’t smokeless.

If you’re supposed to burn sawdust, wood pellets, or other materials, the manufacturer will note it on the packaging. Burning other fuel sources in a smokeless pit designed for firewood could create a large amount of smoke.

What Is the Best Wood to Burn in a Smokeless Fire Pit?

Oak and other hardwoods burn hotter and cleaner than softer woods. Even in a standard fire pit, hardwoods create less residue and smoke than many types of wood.

Avoid green or damp wood. Green or wet wood will create tons of smoke and may not even ignite properly no matter how efficient your fire pit is.

How does a smokeless fire pit work?

Burn dry well-seasoned wood and it will put off a lot less smoke, no matter what type of fire pit you’re using.

Whether you’re looking for an attractive addition to our backyard or something you can take on a trip without getting steeped in wood smoke, there are smokeless fire pit models and makes available to meet your needs.

The Blue Rooster Chimineas are another type of smokeless fire pit – just burn clean dry wood and she’ll burn smokeless – plus they are a great design!

11 TOP Uses For Fireplace Ash: What To Do With Ashes From The Fire

1 thought on “How Does A Smokeless Fire Pit Work? Solo Stove VS Breeo Fire Pits!”