Chainsaw Vs Ax: Which Is Best And When Should You Use Them?

An ax and chainsaw can be used in tandem – there doesn’t need to be a competition over which is best!

A chainsaw is mostly used for felling trees and sectioning them up into rounds. The chainsaw is always used for cutting across the grain of the wood, except for when milling lumber.

An ax is used for splitting these sectioned rounds into right-sized pieces for the fire. You would not use a chainsaw to split wood. An ax can also be used to take small limbs and branches off trees.

There are good felling axes that can be used to drop trees, but it takes A LOT of work. Ultimately, the two tools serve different purposes. It’s always good to have both on hand when working with wood. 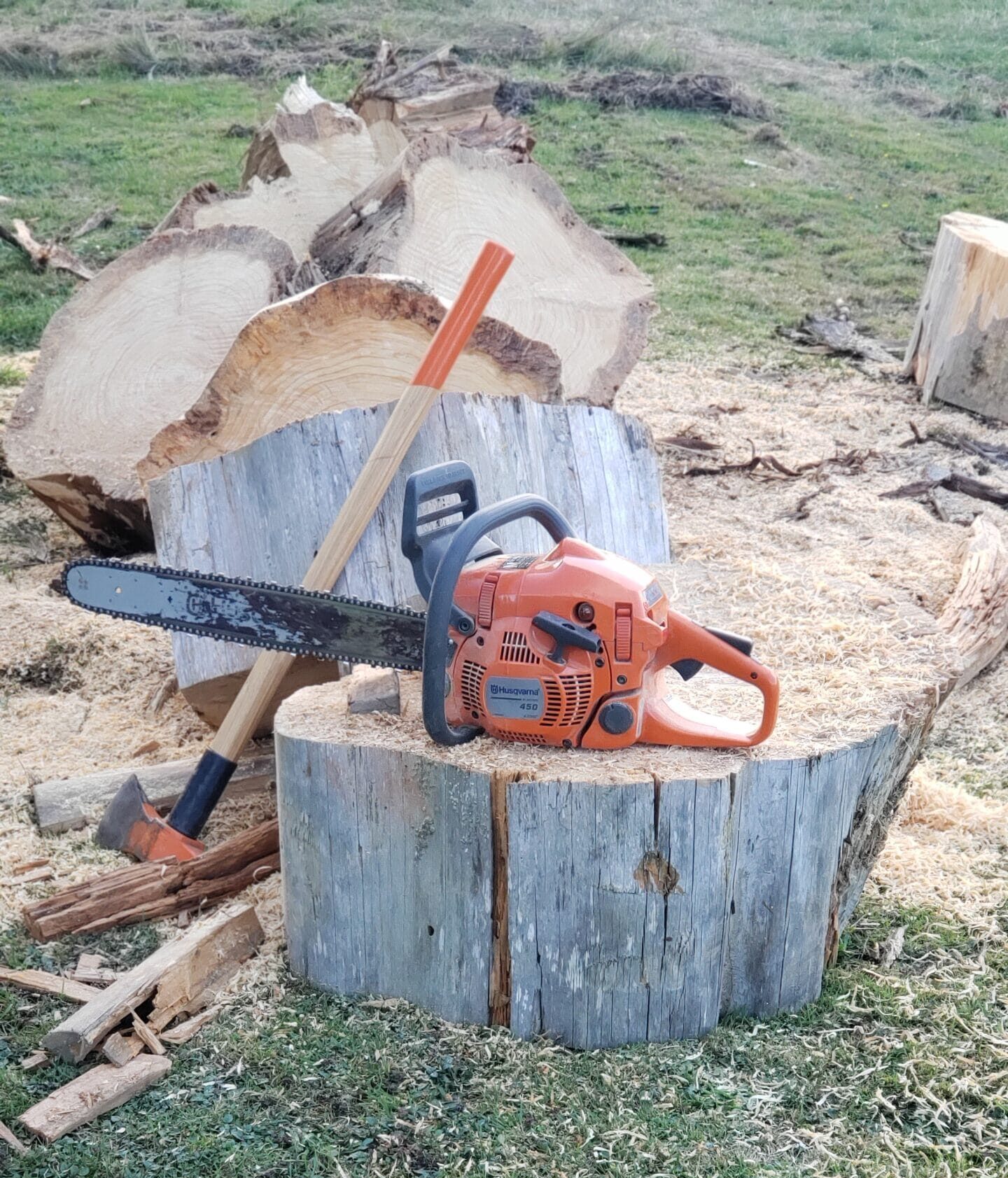 That’s one of my chainsaws and axes in this picture.

The chainsaw is the Husky 450 and the ax is a log-splitting maul.

In the situation that you see here, I have been processing a cord of wood for the fire. These hardwood trees had been down for a number of years already, which is why you can see some decay in the outside layers.

I use the chainsaw for sawing the log into sections, and I have this maul on hand to help out when necessary.

The types of things it helps with here are:

I always have an ax on hand when working with my chainsaw. It always gets some use, one way or another.

I also have a splitting axe that I keep down in the forest so that I don’t have to lug the maul down there.

When it comes to an axe vs maul, they both serve different purposes and so are used on different occasions. 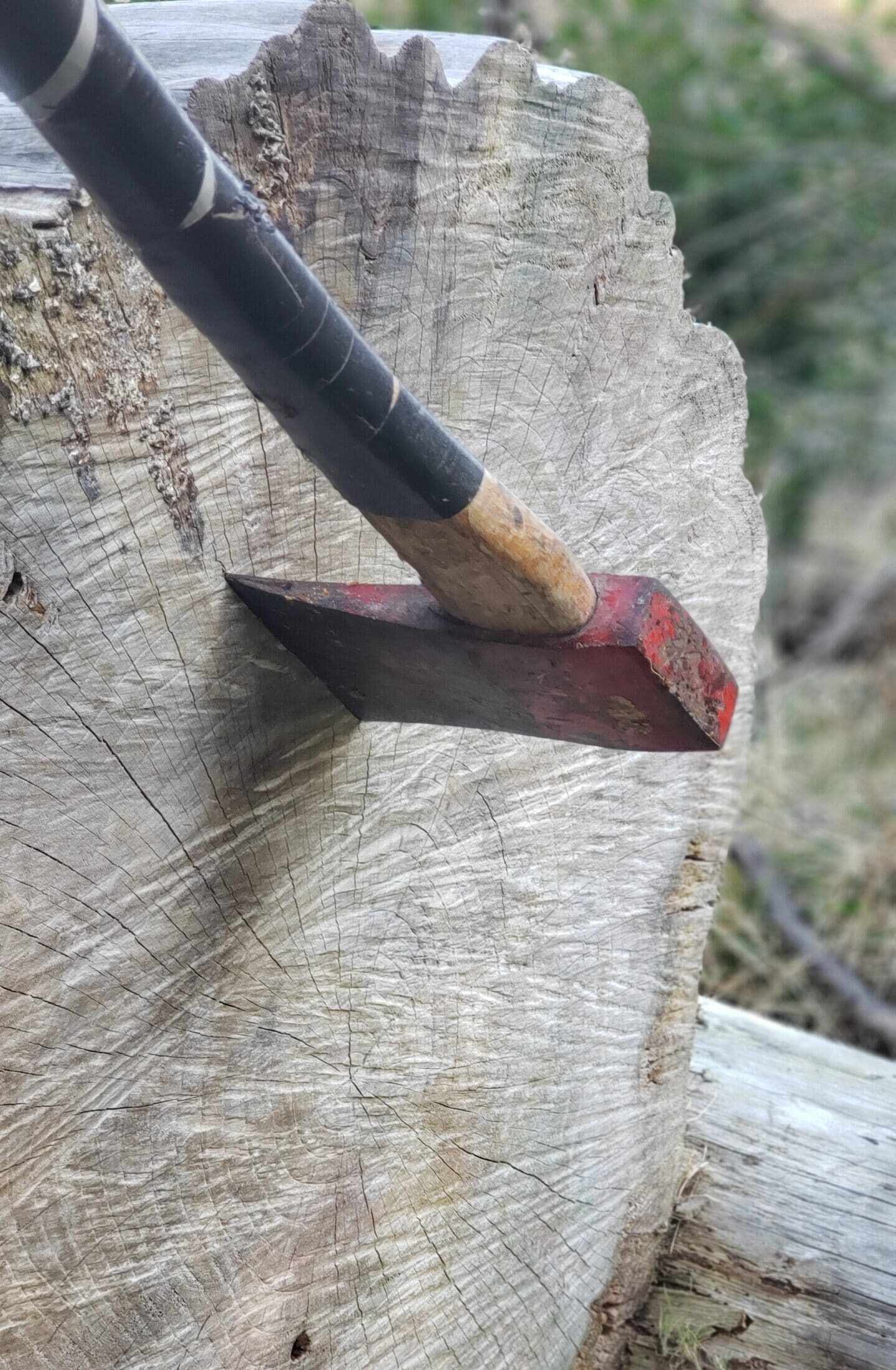 You can see that this ax doesn’t have a sledgehammer-like end to it like the other one.

These lighter axes are better for limbing branches and felling small trees – if you prefer that to using a chainsaw.

You don’t want to be swinging a huge heavy maul around to lop off a few small branches. That would be dangerous and tiring.

They are both hugely useful tools that can be used regularly or in the case of an emergency.

A big storm will hit everywhere at some point or another, and both these tools can help out greatly in the tidy-up.

If you have a lot of wood to split, one of these log splitters at Tractor Supply is another option to get things done faster and easier.

In this section, I’ll just answer a few other ax and chainsaw FAQs!

What are the pros and cons of using a chainsaw over an ax?

Keeping in mind, of course, that they are really used for different purposes!

Is an ax or chainsaw best for splitting wood?

An ax is best for splitting wood once it has been cut down to the right length with a chainsaw.

You would not use a chainsaw to cut sections into fire-sized pieces of wood. It’s dangerous to cut small pieces of wood in this way, and you’ll lose a lot of wood to sawdust (though sawdust has its uses).

Will using an ax or a chainsaw make a stump decompose faster?

The difference between the two would not be huge, but the chainsaw may cause stump rot sooner.

With the chainsaw, the stump can be cut flat and closer to the ground. Also, the chain tears at the wood fibers creating an opening for water. An ax will generally leave a smoother cut which might repel water better, but it depends on who is doing the cutting!

If you want the stump to disappear sooner, drill holes into the surface so that water can seep in easier and sooner. Alternatively, use a good stump grinder to have it gone in a matter of hours.

What is the largest tree width you would use an ax on before choosing to use a chainsaw instead?

Personally, I use a chainsaw for everything like this. It’s just so much quicker and easier.

I certainly would always use a chainsaw for anything thicker than 5 or 6 inches. Why waste precious energy when you don’t need to?

Chainsaw vs ax: which is best to have in combat?

Obviously a chainsaw, except in the case of a prolonged battle. You don’t want to be up against an ax-wielding combatant while you fill up your gas and your chain bar oil.

Is a chainsaw or ax better for throwing?

That depends on who you ask!

Throwing axes is a popular and ever-growing sport, while chainsaw juggling could also be considered a type of throwing… right?

To sum up, don’t think of chainsaws and axes as two different competing tools – think of them as conjoined tools. Instead of ‘chainsaw vs ax,’ think ‘chainsaw ax.’

You really need them both!

Let us know if you have any more questions about using chainsaws over axes, or vice versa, in the comments down below. We’d love to add some more to our FAQs to help everyone out.

Once you’ve taken down and tree, here’s how to get grass growing after stump removal.

A Rick Of Wood: What Is The Size & How Much Does It Cost?