What is a rocket stove?

They won’t take you to the moon and back, but rocket stoves are pretty stellar, with high efficiency compared to traditional stoves. If you’re curious about these unusual, portable stoves, you’ve come to the right place.

Here are 19 of the most frequently asked questions (with answers) concerning anything and everything rocket stove.

Check out the best-selling rocket stoves for sale on Amazon here.

What Is a Rocket Stove? 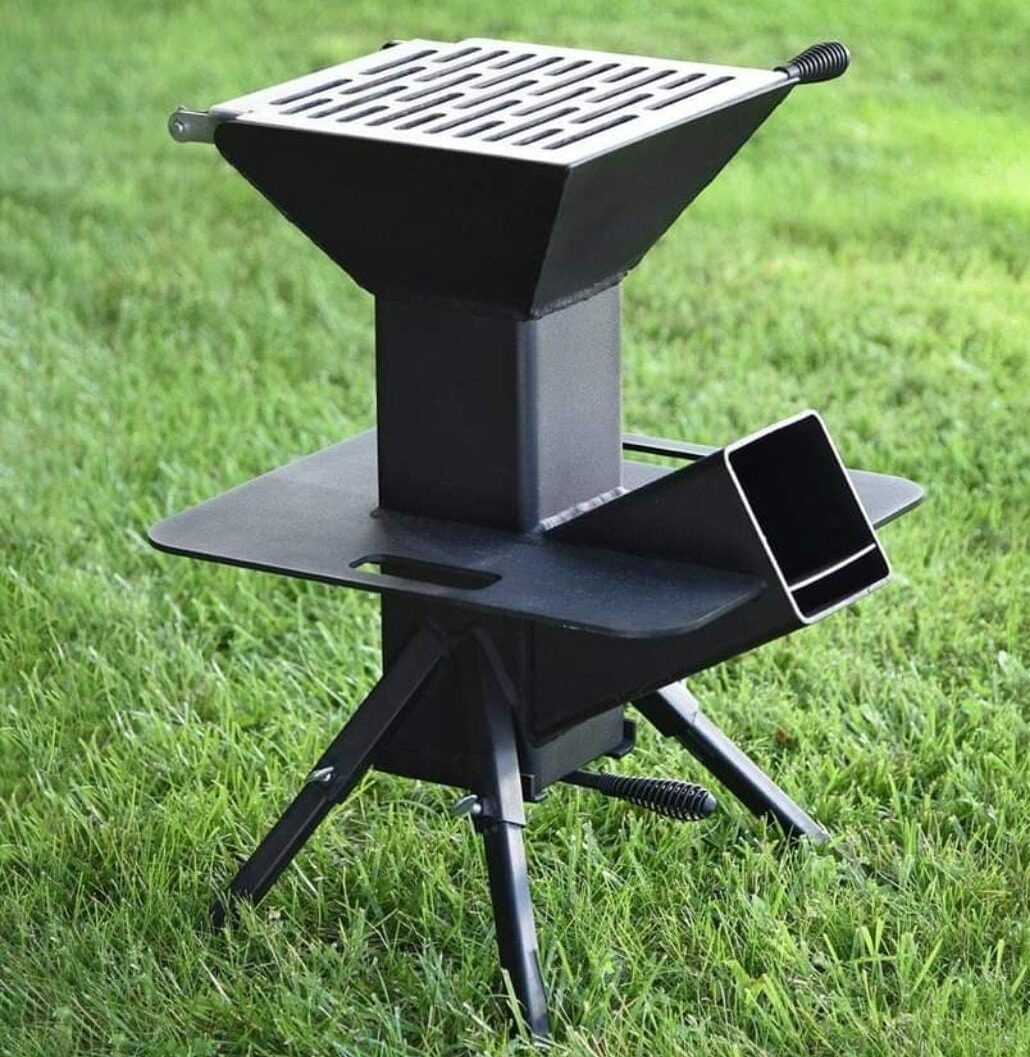 A rocket stove is a stove that utilizes pieces of small-diameter wood. Rocket stoves burn very hotly, and researchers have concluded that these stoves are more efficient than traditional stoves.

A rocket stove consists of a combustion chamber where the fuel burns and a vertical chimney. Part of what makes rocket stoves so efficient is that their vertical chimneys are insulated, meaning almost all of the heat moves upward. The vertical chimney is tall enough to ensure fuel fully combusts before the flames reach up to the cooking surface.

Rocket stoves most often appear as portable cookers, but large rocket stove cookers have their place in industrial kitchens. There is also the rocket stove heater, which forms a part of a rocket stove mass heating system in homes.

Why Is It Called a Rocket Stove?

You can imagine a rocket stove as three connected tubes arranged in the shape of a “J”. The entrance to the first tube is where you put the fuel. When you place the fuel into the feed tube, it begins to burn. The heat travels through the J shape of the rocket stove and exits from the vertical chimney, called (appropriately) the heat riser.

Between the feed tube and the heat riser is where the fuel burns: the burn tunnel.

When using a rocket stove, the flames of the wood are sucked into the burn tunnel, creating a jet of fire — the kind of jet you’d imagine might come out of the back of a rocket. This phenomenon, coupled with the roaring of a rocket stove in action, contributes to the stove’s far-out name.

What Is the Benefit of a Rocket Stove?

According to the World Health Organization, 4.3 million premature deaths occur each year from the use of open fires to feed families in underdeveloped and developing nations.

It may not be what you’re thinking: what is so harmful in using open flames for cooking is that with an open fire comes the inhalation of smoke. Inhaling smoke from a cooking fire is fine once in a while, but there can be severe health implications when it happens two to three times a day.

Significantly, a rocket stove produces no smoke, meaning these stoves are much better for the atmosphere and the lungs of the people cooking for their families.

Beyond the health benefits, there are economic benefits inherent in the use of rocket stoves. In a talk given by Clark Semon at Williams College, he showed that rocket stoves are much more efficient than, for example, modern wood stoves.

What Is the Rocket Stove Size Range?

Rocket stoves come in any imaginable size, from mini to large. There are general parameters on the low end and high end of rocket stove size, and we’ll look at those here.

To burn wood efficiently and fully combust fuel before the heat reaches the cooking area, the rocket stove needs minimum dimensions. A mini rocket stove can be as small as 8.5 inches tall and 6.5 inches long.

This cute little stove would be perfect as a camping rocket stove, and there are mini rocket stoves that are even collapsible for maximum portability.

On the large end of the spectrum, rocket stoves can be pretty massive.

What Is a Rocket Stove Used for?

A rocket stove has many uses, including heating, cooking, water heating, and more. Most common is the portable rocket stove used for camping and other outdoor recreation activities.

Rocket stoves are very efficient at combusting fuel (namely, wood), and as such, produce almost no smoke. This makes them great for cooking meals for which a smoky flavor would be undesirable. They are better suited for this than a chiminea in many ways.

Furthermore, as rocket stoves take small-diameter wood as their fuel, they are perfect for outdoor adventures where often the most readily available wood for burning is small twigs on the ground from large trees.

Can Rocket Stoves Be Used Indoors?

Rocket stoves can work well indoors if vented with a chimney, but it’s not recommended.

In some parts of the world, rocket stoves are used as indoor wood-burning stoves because they produce virtually no smoke. Because the flame stays within the rocket stove’s burn tunnel, there is less fire hazard associated with using a rocket stove indoors compared to other types of stoves.

As you can see in this article, people worldwide use rocket stoves indoors, an option that is much healthier and more efficient than previously used cooking methods like open fires or even cooking on a chiminea as was common in Mexico.

Rocket stoves are also quite common in industrial cooking/heating situations, where their high efficiency is valuable for economic reasons.

Can a Rocket Stove Heat a House?

A standard rocket stove (the kind used for cooking) can’t heat a house. The needs of cooking require very minimal heat compared to the needs of heating a home.

Rocket stoves are, however, used to heat houses. Rocket stove mass heaters (or rocket mass heaters) are rocket stoves designed primarily to heat a home. These massive stoves feature a large burn funnel and a very long heat riser that produces radiant heat in the rooms that it extends through.

Depending on a given house’s heating system, a rocket stove heater can also warm air for later distribution.

One of these mini wood-burning stoves would be a better option for small spaces.

How Does a Rocket Stove Heater Work?

A rocket stove heater can be a highly efficient way to heat an area or cook.

Due to the construction of the rocket stove heater, the burn tunnel sucks in the fire where combustion then turns the fuel into gas. This gas then tumbles up through the heat riser.

Many rocket stove heaters then have what’s called the “gas bowl.” In the gas bowl, a metal chamber forming a large bowl shape around the heat riser, the searing gas from combustion spreads out and heats the surface.

The gas bowl then sends out radiant heat in all directions, efficiently heating anything nearby.

In a rocket stove heater, combustion occurs at such a high temperature that there is little smoke. The typical by-products of combustion, like smoke and soot, stay in the insulated tunnel to be further combusted until the gassy byproduct is almost totally free of smoke.

What Can You Cook on a Rocket Stove? 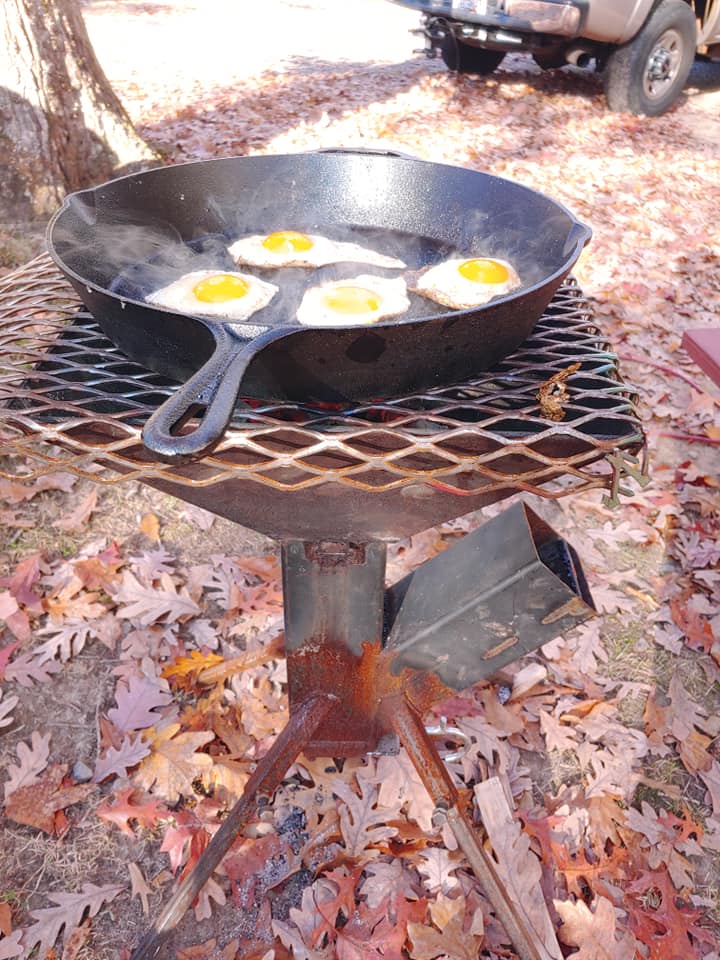 You can cook virtually anything on a rocket stove.

Using a cast-iron pan, you can heat directly on the element of a rocket stove, just like you would with any cooking apparatus.

With a rocket stove, you can barbecue, grill, cook some stir fry, and more. Perhaps you cannot bake cookies as with a pizza oven, but there are many other tasty options using just a cast iron pan.

Are Rocket Stoves Good for Camping?

Rocket stoves are excellent for camping and many people prefer them to the like of a portable propane fire pit or charcoal grills.

Many small rocket stoves are even collapsible, meaning you can take down your rocket stove and store it flat in your car or backpack before setting out on the wide dusty high road.

Part of the reason rocket stoves are so inimitable for camping (in addition to the fact that they’re so portable) is that they burn wood very efficiently. Even if the wood fuel available to you is very sparse, rocket stoves can make do with very little.

Also, as many of us are aware of the toxins in the air, rocket stoves are great for cooking because they produce virtually no smoke.

Although you won’t get that lovely smoky flavor you can get over an open fire, rocket stoves will provide consistent heat for cooking unique and unusual dishes, even in the great outdoors.

Does a Rocket Stove Smoke?

A rocket stove produces very little smoke. This is because of the high heat at which the fuel in the rocket stove burns. What remains of the combustion (like, for example, smoke) is kept in the insulated burn tunnel of the rocket stove. Many people claim that this smoke then combusts further.

As matter can be neither created nor destroyed, a gaseous byproduct of burning wood is inevitable when using a rocket stove. This gas is generally cleaner than the smoke produced from an open fire.

What Is a Self-Feeding Rocket Stove?

If you want your rocket stove to be more self-feeding (that is, requiring less time putting in new pieces of wood), you can have a rocket stove with a long feed tube and use long pieces of wood. The longer the piece of wood, the less frequent you need to refuel.

How Long Does a Rocket Stove Last?

Although the heat produced by rocket stoves varies from model to model, there is reason to believe that a rocket stove can provide heat for unbelievable durations, requiring little fuel. In this video, the filmmakers detail how one log created 13 hours of heat with their rocket stove.

How Hot Does a Rocket Stove Get?

A rocket stove can get extremely hot, much hotter than a wood stove.

By some indications, certain rocket stoves can reach above 1000 degrees Fahrenheit. Most rocket stoves, however, are built to cook food at reasonable temperatures.

Rocket stove mass heaters have an exhaust temperature of between 140 and 200 degrees Fahrenheit. That said, this is only for exhaust.

The heating element of a rocket stove will easily exceed the boiling point of water (212 degrees Fahrenheit), a necessity for the rocket stove water heater.

Are Rocket Stoves Any Good?

What Are the Dangers of a Rocket Stove?

Many rocket stoves have an uncovered feed tube, giving direct access to the high-temperature burn tube. If a piece of curtain strays too close to the rocket stove, it could get sucked in, causing a fire.

Furthermore, rocket stoves can get extremely hot and can cause indelible skin damage upon touch.

That said, however, rocket stoves offer a serious safety advantage to open fires. Unlike open fires, rocket stoves cover most of the flame. They also produce virtually no smoke and are much better for the lungs.

Who Invented the Rocket Stove?

Larry Winiarski invented the rocket stove. Winiarski created his invention in the 1980s, but he based his design on the heating principles used by the Romans.

An essential precursor to the rocket stove appeared in 1780. Aimé Argand created the argand lamp, which represented a major revolution in indoor lighting, burning much brighter than other lamps of the era.

What Is the Point of These Cookers??

A rocket stove burns wood much more efficiently than, for example, three-stone fires or other wood ovens. Many rocket stoves are also portable and compact, making them excellent for camping.

Can a Rocket Stove Keep You Warm?

If you were wanting something a bit more permanent, check out this round-up of the best outdoor fireplaces. Or, if you were looking for something to cook on outdoors, have you seen the Ooni Pizza ovens?

How Does A Smokeless Fire Pit Work? Solo Stove VS Breeo Fire Pits!