Hickory is a common wood used for fires and grills.

If you’ve ever heard the term “hickory-smoked” to describe a type of meat, it’s because the chef smoked it over hickory firewood to add a distinct smoky flavor to it.

Hickory wood is known for its tree nuts and uses for barbecuing. However, you may be wondering: is hickory good firewood? The hickory tree is part of the walnut family.

It produces hickory nuts that both humans and animals can eat. It’s a deep-rooted tree native to the United States and found particularly plentiful in Indiana.

Hickory trees grow in floodplains and moist bottomlands and can reach up to 100 feet in height with a width of 25 feet.

There are about 18 types of hickory wood, including:

All varieties can be used as firewood, but shagbark hickory firewood is the most common because it has more BTU per cord than other variations. It is also the most commonly found tree.

Black hickory wood is the least common as it is an endangered species only found in Indiana.

It takes about 10 to 15 years for a hickory tree to mature enough to produce nuts. These slow-growing trees are one of the most valued trees native to North America and can live for about 200 years.

It is a valuable tree because its hardwood protects it from the weather, while the sturdy roots keep it from toppling over during strong windstorms.

The bark is rough with many vertical furrows and ridges, giving it a shaggy appearance. It is difficult to harvest and split because it is a dense hardwood, meaning the plant cells stay packed tightly together.

Hickory is a popular wood used to build furniture, floors, or tool handles because of its density and durability. Unlike other woods, hickory can withstand damage, making it a popular choice to use as floors in rooms with heavy foot traffic.

Hickory as firewood has many different uses:

to burn in the fireplace, cook food, and use in outdoor bonfires, to name a few.

It is a hardwood that burns even hotter than some other types, like maple and oak. Hickory firewood does not hold much moisture, making it easier to ignite.

While it is possible to split by hand, hickory is tougher to break apart than other wood types. It is heavy and very dense, so while it may be easy to light, it will be difficult to break apart the hickory logs to dry them out or fit into your fireplace.

Hickory is popular firewood to use in the home because of its distinct, pleasant smell, hotter temperature, and gentle classic crackling sound as it burns. It does not release any harmful emissions, making burning hickory wood safe indoors.

Hickory is used to smoke meats and cook barbecue as it adds a distinct smoky flavor. The smoky flavor also goes well with certain heartier meats, like bacon, ribs, or pork shoulders.

However, more experienced grillers should use hickory for smoking rather than new grillers because it can be easy to overcook the meat on the hotter fire.

Different types of wood require longer or shorter seasoning processes, and hickory for firewood needs a longer time to process.

Typically, it takes about 12 months to season hickory and prepares it to become firewood. When properly seasoned, about 20% of moisture remains, making it much drier with a low sap content. Use a moisture meter to check.

Beware of critters if you store your wood outdoors. Insects and other creatures love to hide and live in hickory woodpiles. You may see a lot of sawdust around the pile if bugs are digging into the wood.

Because hickory firewood is a high-quality hardwood, it is in the mid-price to expensive range.

You may be able to find cords of hickory firewood from $120 up to $400. However, it depends on your area and whether it is a correctly split and seasoned hickory wood. 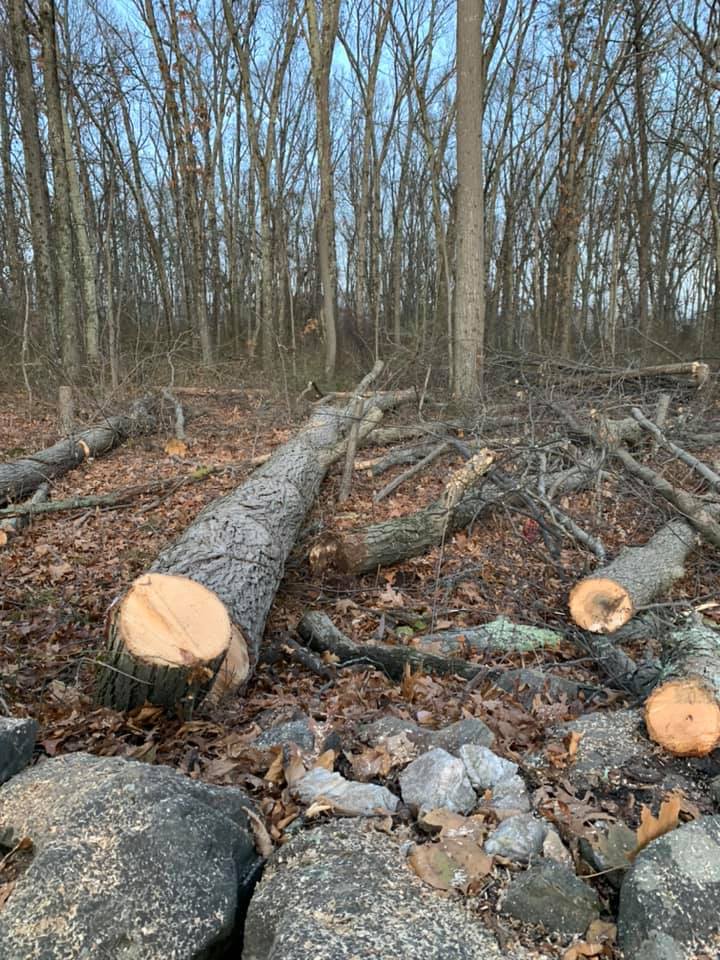 Here are the answers to some common questions asked about hickory logs.

How to identify hickory wood?

Hickory wood typically has a reddish, medium-brown hue highlighted with gold or yellow.

It has a more rustic appearance and straight grain. It is popular for floors or walls in homes or business buildings because of its consistent look and quality.

Can you burn hickory in a fireplace?

Like most hardwoods, hickory is an excellent variety to burn in a fireplace, wood stove, or even in a wood fire pit.

It lasts for a long time, produces a pleasant crackling sound, and smells nice without becoming very smoky. Hickory wood also does not release harmful emissions, making it safe.

How long does it take hickory firewood to season?

Hickory firewood has one of the longest seasoning processes.

It takes about 12 months to season this wood, though it may take slightly less time if you dry it in a more arid and hotter climate.

You can also speed up the process by laying out split hickory wood rather than logs. It’s crucial to season it appropriately; otherwise, it will produce thick smoke and take longer to light.

The smell of hickory wood makes it such pleasant firewood to burn.

It has a spicier smoky flavor that can bring a delicious flavor to heavier meats like beef and pork. It is savory and sweet without being too overbearing.

The hickory smell is subtle but distinguishable by its sweetness. Liquid smoke flavoring actually comes from hickory wood smoke, which tells how pleasant the aroma is!

Does hickory smoke more than oak?

Hickory and oak are often mixed while smoking meats. Oak has a less intense flavor than hickory.

When producing smoke, hickory and oak do not produce much because they are hardwoods. Hardwoods generally carry less sap content and do not smoke as much as softwoods.

Is hickory hard to cut?

Hickory is difficult to cut because it is a type of hardwood.

The grain itself is hard and may crack if you cut it with an ax. However, though it is hard to divide, it also burns hotter than other woods and burns for a longer time.

A 20-ton log splitter would also be perfect for this type of thing.

Hickory does not split easily because it is a dense hardwood, making it one of the more challenging trees to cut and break apart to dry for firewood.

When you compare hickory vs oak firewood, hickory is a clear winner for a warmer and longer-lasting fire and a pleasant aroma.

You can burn it both indoors and outdoors and even use it to smoke meats for a delicious smoky flavor. When looking for reliable firewood, seasoned hickory wood is a great variety.

If you’re able to get your hands on some Walnut firewood, that’s just as good!

Everything You Need to Know About Walnut Firewood!