Everything You Need to Know About Walnut Firewood!

Walnut wood makes for excellent firewood – though many would call it wasted as it’s a premium wood that’s great for the likes of furniture, axe handles, and so on.

A properly-seasoned piece of walnut will easily catch fire, burn cleanly, and produce a pleasantly nutty aroma while it smolders away at a comfortably warm temperature.

If you attempt to burn green, unseasoned walnut wood, you’ve created an impromptu fog machine — but much more harsh on your lungs.

This wood’s high moisture content means that burning it before it’s completely dried will result in large amounts of thick smoke, which is unpleasant enough if you’re outside and even worse if you’re indoors.

As long as you take care to use only dried wood, however, walnut can be an excellent choice for a fireplace.

The walnut tree most commonly used for timber is the Persian walnut (Juglans regia).

It’s a widely-cultivated species with a long history of use by humans, believed to originate in Iran.

While it’s hard to determine the exact origin of the tree, it is certainly native to the Old World.

It has also thrived in the New World, particularly in the nut-growing regions of California.

It was anecdotally claimed to have been propagated in several regions by Alexander the Great in the fourth century BCE, and by the Romans after him in later centuries.

There has also been liberal use of North America’s native variety, the eastern American black walnut, or Juglans nigra. This deciduous hardwood is the only wild nut tree naturally found in the United States and is the primary source of black walnut wood.

This wood is prized for its distinctive rich, dark brown coloration and being durable yet workable. Black walnut is typically more expensive than the more delicate European white walnut varieties.

Both trees belong to the Juglans genus, any member of which can be referred to as walnut. All these trees can produce the toxin juglone, which causes severe damage to other plants and trees attempting to grow in the same soil.

Walnut trees are usually planted as far from other crops as possible to prevent them from killing off their competitors. Fortunately, this toxin breaks down when exposed to extreme heat and is harmless once the wood has burned.

You can avoid this by seeking out walnut trees with wide canopies and tall, straight trunks.

Once the wood is cut, it should be seasoned for at least six months and ideally up to a year.

Black walnut has a higher moisture content than white walnut and is best left to season for up to two years to achieve the proper dryness needed for quality firewood. This also reduces the sap content to more manageable levels.

While black walnut trees themselves aren’t uncommon, most are grown specifically for their expensive wood to be used in making furniture, so it can be difficult to acquire some unless you literally have money to burn, or you happen to live in an area where they grow in large quantities natively.

White walnut tends to be somewhat smaller and has a shorter lifespan, but is typically less expensive. Both trees are large enough that a single tree can handily provide a full cord of firewood when completely harvested.

Both varieties have a long burn time and produce very little smoke. Even highly popular firewoods like elm and cherry can’t produce such good heat production over a long period.

While either type of walnut can be used for wood stoves or fireplaces, black walnut is considered to be excellent for smoking meat, as it imparts a strong, almost bitter flavor that pairs well with red meats such as beef and pork.

Many would argue that a better use for walnut, rather than putting it on the fire, is to mill it into slabs for furniture (like tables and benches) or lumber.

Many people use their home chainsaw mills to slab it up and use it for these types of projects because the wood is very attractive.

Because it’s a hardwood, you do need a powerful chainsaw for the task – something like a professional Stihl or Husqvarna saw is good.

However, many people use a cheaper Farmertec saw for these types of applications. They’re still very powerful saws, but because they’re cheaper clones you can abuse them a bit more on a mill and not feel too bad about it!

After learning about walnut firewood and its origin, you might still have some questions.

These are some of the most commonly asked questions.

What Is The Difference Between Walnut and Black Walnut?

Black walnut is a much harder wood than softer, more delicate white and English walnut trees, with a denser, more regular grain.

Despite the large quantity of juglone toxin produced by living walnut trees, neither the smoke nor the ash from walnut firewood carries any toxins, as the chemical makeup is broken down completely by the heat.

Why Is Black Walnut So Expensive?

Black walnut trees have a relatively slow-growing time and their wood is in high demand for use in furniture, thus driving up the price considerably.

Between the low supply and the high demand, you’re unlikely to find cheap black walnut wood unless you happen to be growing it yourself.

Does Walnut Burn Hotter Than Oak?

Despite walnut’s many virtues as firewood, oak firewood retains its status as one of the most prized varieties of firewood for many reasons, with an extremely high capacity for heat production among them.

It certainly burns hotter than softwoods like poplar firewood.

Perhaps unsurprisingly for a tree valued almost as much for producing edible nuts as high-quality wood, burning walnut wood is known to produce a rather nice, nutty aroma.

Oddly enough, it’s said to smell more like roasted chestnuts than walnuts — although the latter nut may simply not have a distinctive enough smell to stick in the memory. 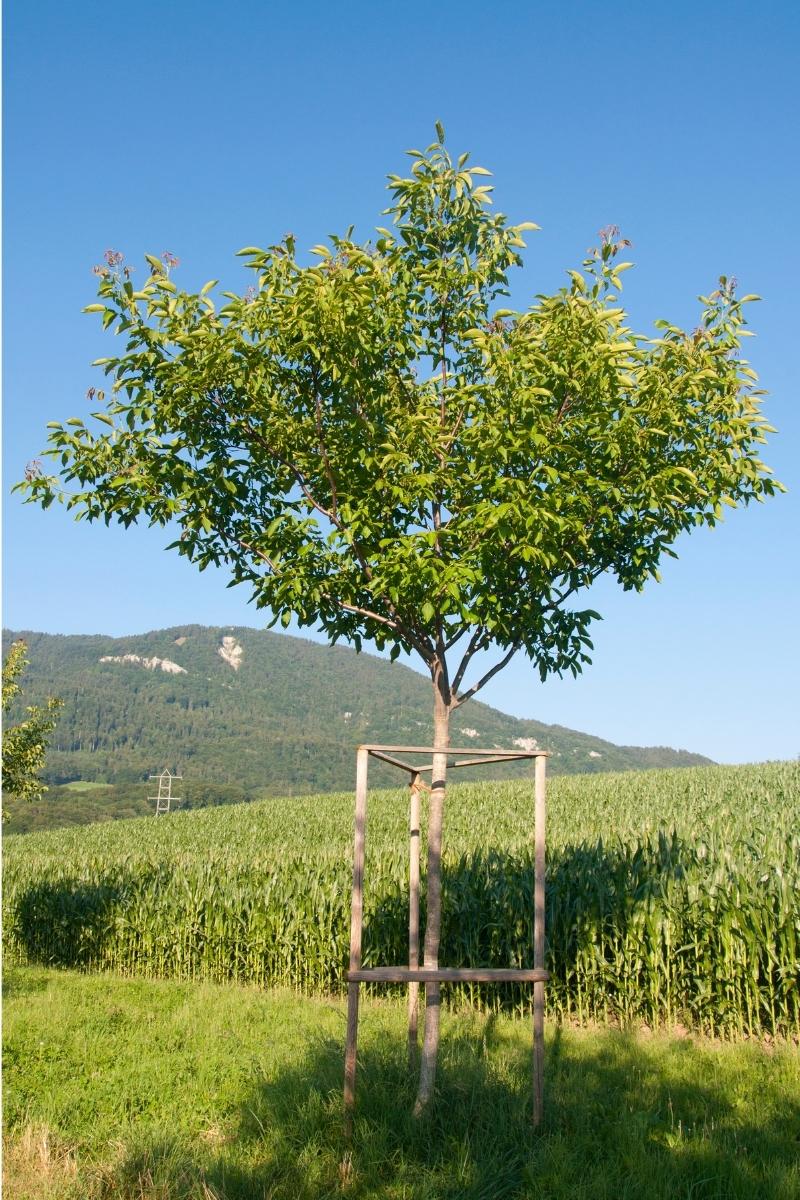 Ultimately, while potentially an expensive option, walnut can be an excellent choice of firewood for anyone with access to it.

Particularly those looking to smoke wild game with the delicious smoky flavor of black walnut or enjoy a comfortable night in front of a cozy fireplace.

Just make sure the walnut firewood you get was seasoned well, and you’re good to go.