Finding the best type of wood for your fireplace is about finding out what’s abundant in your area, on top of knowing whether it’s safe to use.

It may be abundant where you live, but is cedar good firewood?

Burning cedar, particularly indoors, isn’t a good choice. Cedar has many oils and compounds that release when the wood burns. Sometimes, these can cause unintended consequences.

Let’s go through what makes cedar a sub-par choice for indoor fireplaces by discussing the tree species and how burning affects it. 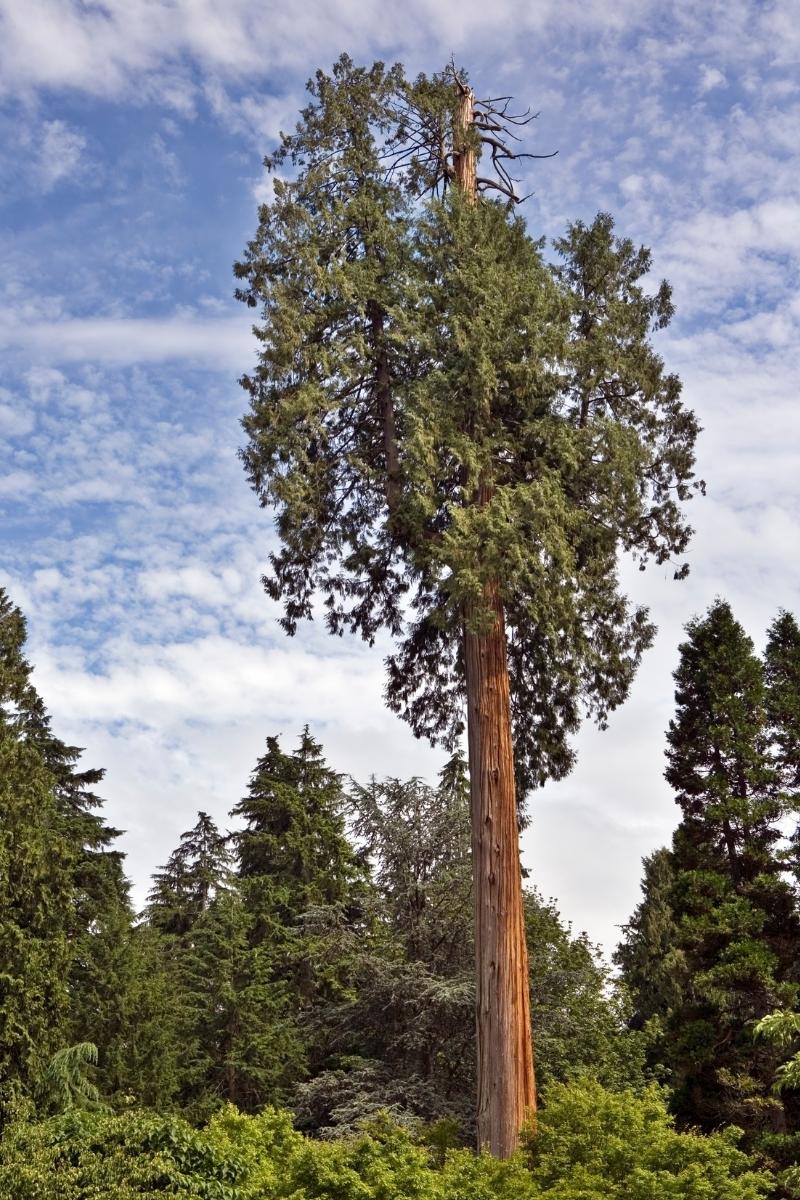 The cedar tree is a bit of a mystery.

There are only four true species of cedar, but none of them are native to North America.

Instead, what North Americans commonly see and refer to as cedar trees are actually what plant biologists refer to as ‘false cedars.’

Western red cedars may originate from North America, but people have planted them in places as far away as Britain and New Zealand.

Since it’s a common wood species around the world, let’s go through its characteristics and appearance.

Western red cedars are massive softwood trees that can grow up to 200 feet tall and 8 feet in diameter.

They grow so large because they often live for more than 1000 years.

Western red cedars have a brownish-gray-colored bark that looks almost stringy. The bark sheds off the tree as it matures.

Often, these pieces of bark will fall off the tree in long strands.

Western red cedars have a pale yellow almost white appearance. The heartwood of the tree might be darker. It’s often slightly red or pinkish.

Additionally, Western red cedars have prominent rings. They are usually much darker than the surrounding wood, appearing either red or brown.

Western red cedars have a straight grain that is recognizable by its many parallel lines.

It has a medium-coarse texture, meaning that there aren’t many variations in the overall size or shape of the grain.

People can easily identify western red cedars by their leaves.

Western red cedars have a scale-like green leaf that overlaps with others like shingles.

The leaves are flat and arranged in a fan-like way. They generally grow in pairs, extending away from the branch.

They have a strong scent that people easily identify as cedar. 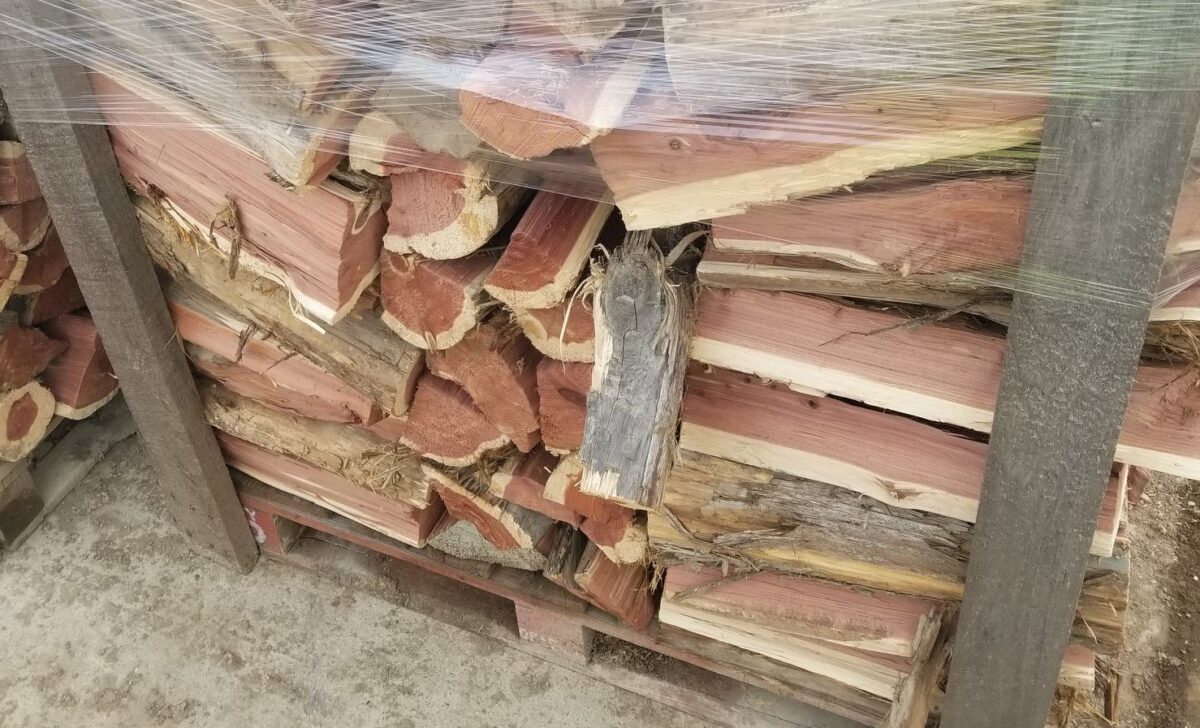 Softwoods are lighter than hardwoods because they’re less dense. Less dense wood can make for good kindling, but it’s not as useful as firewood.

Other common firewoods, like oak, can produce up to 30 million BTUs. That means oak can produce 60% more heat using the same volume of wood.

If you do choose to use cedar for firewood, it’s important to allow it ample time to dry.

Air drying cedar wood takes a minimum of nine months due to the high moisture content of its green wood. Larger or wetter logs may take up to 18 months to air dry.

Where To Burn Cedar

But, can you burn cedar in a fireplace?

In general, you should avoid burning cedar indoors for a few reasons. The major reason is its oils.

Cedars produce numerous different oils. When heated, these oils release from the wood and spit out of the fire. In rare cases, this can cause a house fire.

More often, these oils can burn people or annoy them with the constant crackling. Additionally, the oils have the potential to build up in your chimney as soot.

One thing to clear up—some people think the oils in cedar can become toxic when burned. Although smoke is never good to breathe, cedar won’t cause any more damage to your health than other types of wood.

With that being said, cedar wood is not useless. Dried cedar is perfectly fine to use, both indoors and outdoors, as kindling.

Dry cedar still has those oils inside, which makes for a great natural fire-starting fuel.

Once the cedar is dry, it splits easily into small pieces that work wonderfully as kindling.

Small pieces of dry cedar will ignite quickly and burn hot. High temperatures help ignite the other fuel in your fire more efficiently.

Cedar and oak are both easy to find in North America, which is why they’ve both been used as firewood.

The only difference is that one outshines the other in terms of efficiency and longevity.

Unlike cedar, oak is a hardwood that burns for a long time. When properly cured, it burns without popping sparks.

The slow and clean burn of oak firewood makes it the superior choice for both indoor and outdoor fires.

Here are some common questions people ask about cedar firewood

How long does cedar need to dry before burning?

Does burning cedar cause creosote buildup?

Creosote is a chemical that comes about when natural materials, such as wood, burn. It’s a mixture of ash, tar, and other chemicals.

When you burn wood in a fireplace, creosote can build up in the chimney and cause a major fire.

Since cedar has so many oils and it produces a moderate amount of smoke, it can cause creosote buildup.

Can you burn cedar in a wood stove?

You can burn cedar in a wood stove, but because it burns quickly and doesn’t put out a lot of heat, it’s not the best.

It is okay to burn cedar logs in combination with other denser firewood, such as cherry wood or cottonwood.

However, the oils from cedar still pose a risk to your wood stove.

What are the benefits of burning cedarwood?

Cedarwood ignites quickly and is easy to split into logs, which makes starting a fire much easier.

Not to mention, it has a very characteristic and desirable smell.

Cedar is a versatile plant species that people can use for many purposes, including siding, flooring, and carving projects.

But you should avoid using cedar as firewood indoors unless you plan on only using it for kindling.

If you’d like information about other types of wood, check out these great resources about ash firewood or black walnut wood.