Should you get the Poulan Pro PP5020AV?

Last year, I bought a new chainsaw in the same price range as the Poulan 5020AV. I took it home, started it up, and began sectioning up some logs. After a while, I stopped the chainsaw for a short break. When I went to start it up again, the spring attached to the pull-cord broke, and that was the end of my saw for the day!

Ever since I’ve been a bit skeptical of cheaper chainsaws, but let’s consider if this Poulan saw is better than that one! 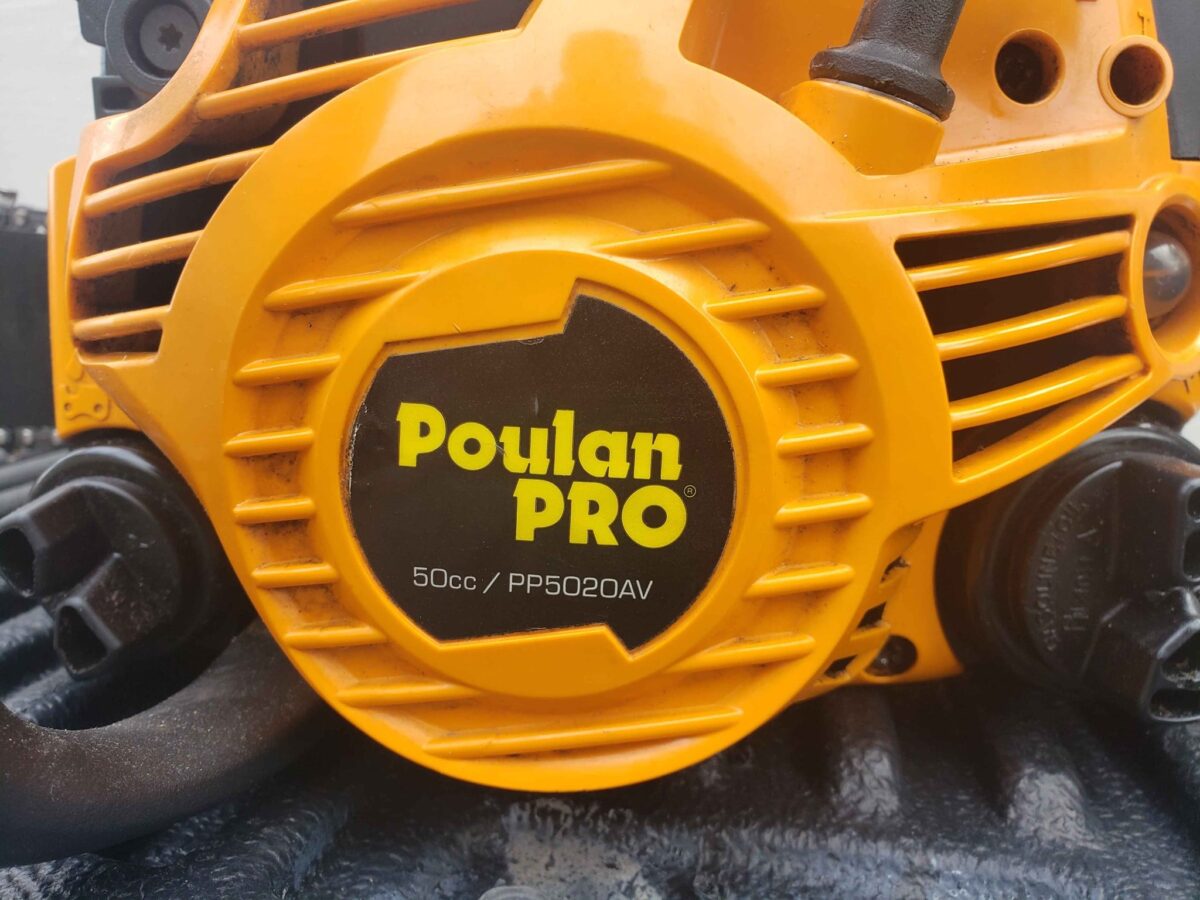 There is no shortage of chainsaws out there, so why should you consider the Poulan Pro PP5020AV?

Poulan is one of the most respected chainsaw brands – it’s right up there with the likes of ECHO and Jonsered. Poulan saws cost about the same when comparing apples for apples as well (or ccs for ccs).

This 50cc Poulan Pro chainsaw is not quite on the same level as Stihl or Husqvarna, but it is significantly cheaper!

My Husqvarna 450e is also a 50cc chainsaw, but it costs $450 new, as opposed to the PP5020AV’s $250ish price range. So this chainsaw is about half the price of a comparable Husqvarna chainsaw.

But you came here to learn more about the PP5020AV, so let’s focus on that now! 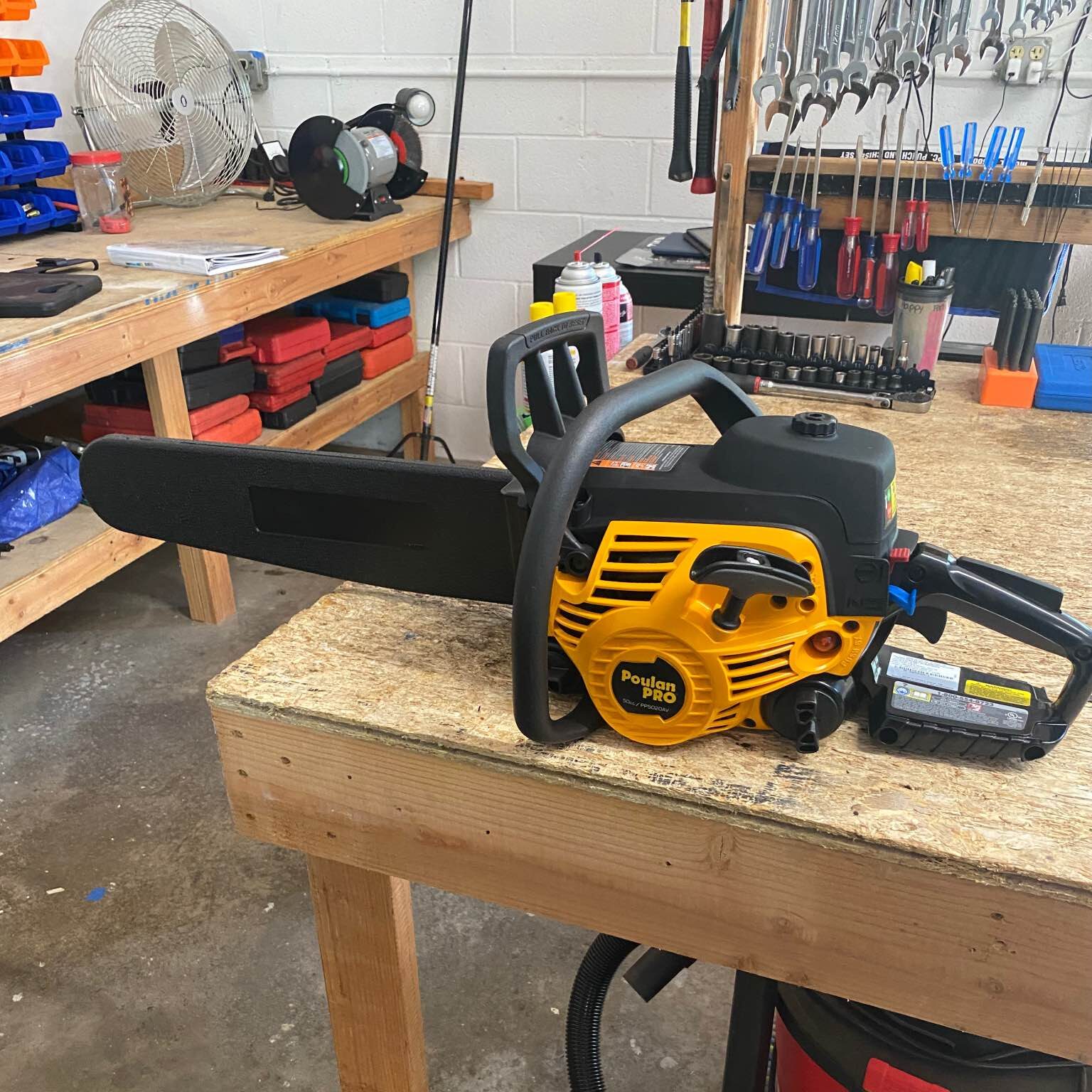 50cc’s is a decent amount of power and this saw can be used to carve up reasonably sized logs. It’s fine to use for dropping trees, even larger trees. A 20-inch bar is a really good length to have as it allows you to work on the bigger stuff. Don’t think you’re limited to working on 20-inch trees or less, because you’re not.

The big difference between this saw and the more expensive saws is that you can’t expect this one to go all day every day. It can be used for a bit, then it needs a rest. You also don’t want to rely on it as an every day saw either. It’s fine for processing up to perhaps 10 cords of firewood per year, but not for use as a logging chainsaw.

It’s a good homeowner chainsaw, and may possibly suit light farm use. You can also use it as a backup chainsaw to your main (better) chainsaw.

Here are some more of the features (more info on Amazon):

Many of these features are standard on all chainsaws now, so don’t let them wow you on this alone! For example, I don’t know of any modern chainsaw that doesn’t have an ‘automatic chain oiler’!

For those who like more of the technical specs: 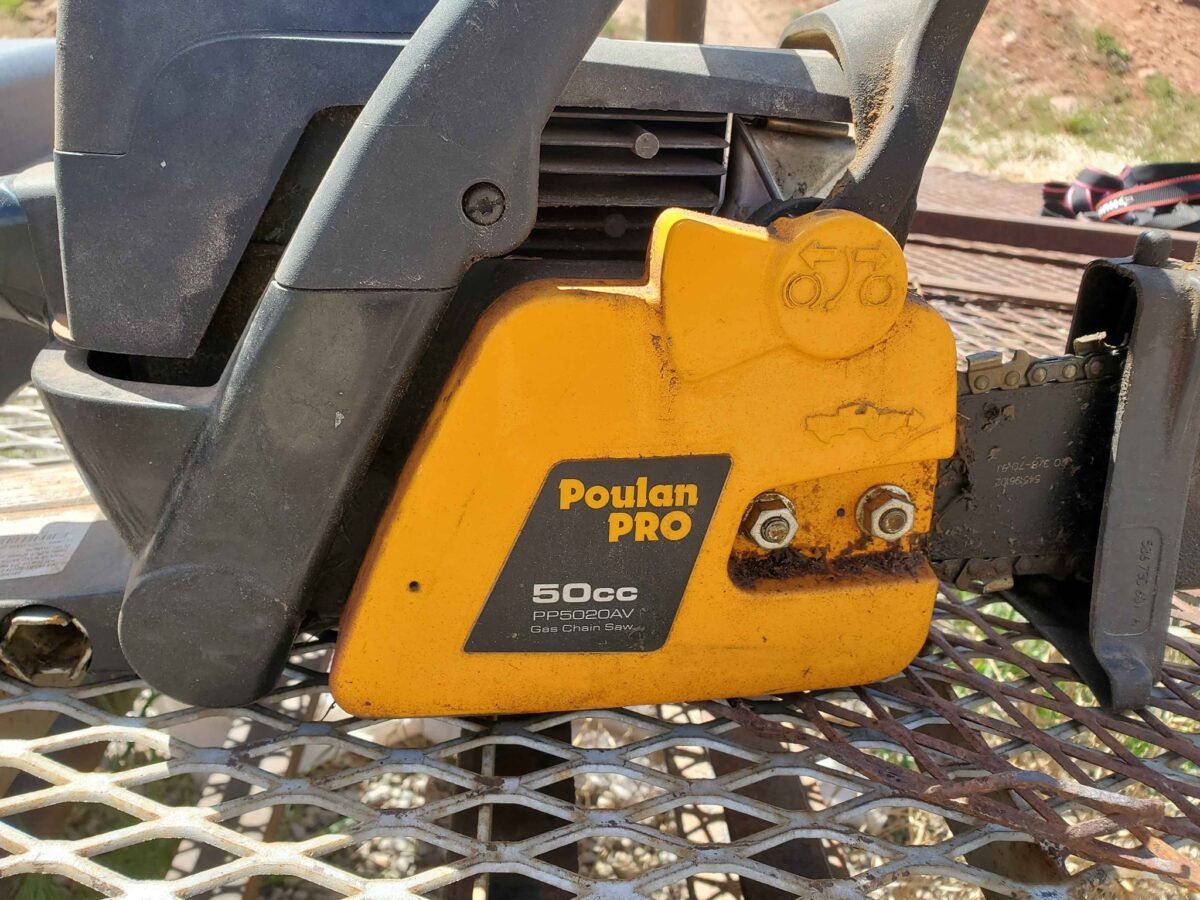 The Poulan Pro PP5020AV is a decent saw for infrequent use.

If you look after it and treat it well, there’s no doubt it will work out well.

It’s a good saw for processing firewood, dropping trees, and tidying up around the home, garden, or hobby farm.

Read the reviews on Amazon here to see the range of both positive and negative reviews – there are always both!

Keep in mind that sometimes the negative reviews are related to shipping and delivery problems rather than actual product issues.

Where can you buy the Poulan Pro 5020AV?

Here are some retailers that I found are selling it:

It’s always listed at around the same price at each retailer, so go with the retailer you most prefer.

Does anyone know if it’s available to pick up from your local big-box store? Let me know down below in the comments. 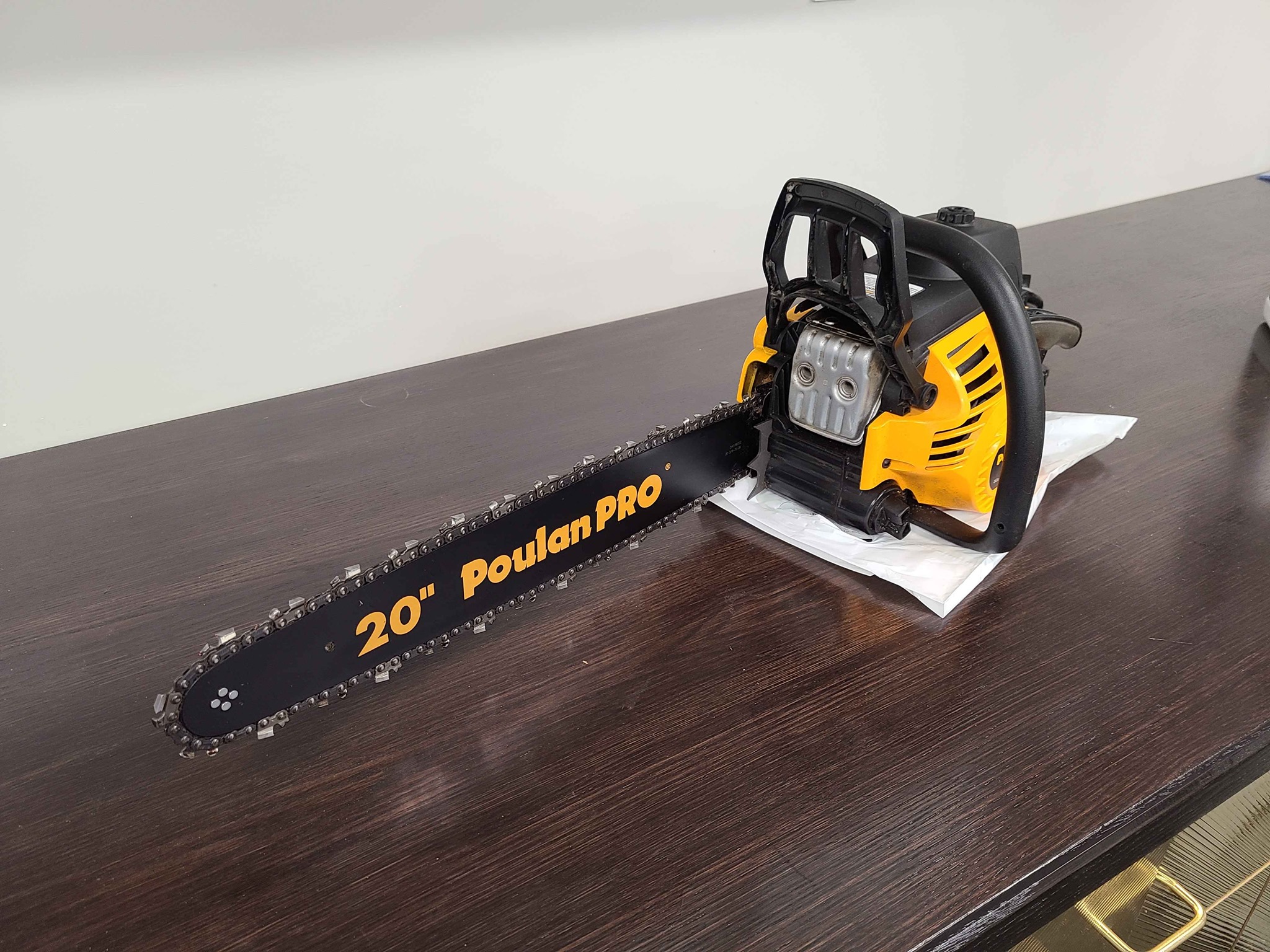 While the Poulan PRO PP5020AV chainsaw isn’t perfect for everybody and every situation, it’s a great saw for the right person.

It’s easy to get started with, easy to use when in action, and as easy to maintain as any other saw.

If it’s at the top of your budget, I would say go for it. You will be running the same risks with any comparable model in the same price range. Bluemax chainsaws are similar, but probably not quite as good as Poulan.

The other option I often recommend is to try and find a second-hand Husky or Stihl chainsaw at the same price. If you know what to look for, you could pick one up in excellent condition for the same (or similar) price to one of these cheaper chainsaws. In many ways, that can be preferable.

Though you would want to know the history of the saw and be sure it had been looked after. While it’s not nice to say, estate sales can be the best place to pick up quality used saws.

Nevertheless, sometimes you just want a brand new chainsaw. The Poulan brand is owned by Husqvarna, and they do share a lot of similarities. If the Poulan 5020AV feels right to you, go on and grab it!

A Rick Of Wood: What Is The Size & How Much Does It Cost?

What Is A Chimenea? An Intro To The Chiminea Fire Pit