How To Put Out A Fireplace Fire Quickly And Safely: Wood-Burning And Gas

How do you put out a fireplace fire?

The method you choose will obviously depend on your situation – whether it’s an emergency and you need to put the fire out, or whether you’re simply too hot and want the fire to die out.

Here’s how to put out a fireplace fire, starting with what to do in emergencies.

Put Out Fire In Fireplace

Understanding a little more about fire can help us to know what to take away or do to put one out.

If you were able to take away any of these elements, the fire would go out.

The only time I’ve had to quickly put out a fire in my woodstove was when I suddenly noticed it was leaking water – there was a hole in my water heating system.

Some water was getting into the firebox, which helped take out the heat, but otherwise, I just shut off all the oxygen and removed a large piece of wood I’d just stuck in the fire (I was able to safely with gloves and take it straight outside – our burner is near the front door).

An open fireplace can be more difficult to put out, though it’s not all that dissimilar to putting out a fire pit.

How To Quickly Put Out An Open Fireplace Fire

Many wood-burning fireplace inserts and wood stoves have vents that can be opened and closed to let more or less air to the fire.

If this is the case on your fireplace, close these vents as much as possible to cut off the oxygen to the fire.

If you have an open fire and you had something strong and fire-resistant like a sheet of metal that you could temporarily put over the front of the fire, this would help too.

In an emergency, it’s best not to use water to put out a fire initially – this can cause more problems and it will likely make a great mess.

If you want to put something on the fire to put it out, use something like flour – this also makes a mess but should be a bit easier to clean up than water on fire.

Another alternative is a good fire extinguisher – again, this will make a mess, but that’s better than burning down the house!

Here’s a step-by-step on how to put out fires:

And then, if you continue to move the existing embers about, exposing them to cool air and keeping them out of other hot spots, the flames will die down and everything will cool quickly.

If you have an ash bucket with old cold fireplace ash in it, you could also put this on top of the fire to extinguish it.

How To Put Out A Fireplace Fire Before Bed

Putting out a fire before bed doesn’t require extreme actions like chucking flour on the fire or blasting it with a fire extinguisher.

That goes without saying!

However, the other tactics are the best way to put a fireplace fire out quickly.

It is very good to put out open fires before you go to bed, but most closed fireplace inserts and wood-burning stoves can simply be left to burn themselves out naturally.

If you don’t want the hassle of putting out a wood-burning fireplace each night, consider getting a good electric fireplace.

How To Put Out A Gas Fireplace

As stated in the video at the beginning of this post, the best way to put out a gas fireplace is simply turn off the gas.

There are multiple ways to turn a gas fireplace off:

In the case of a gas fire emergency – such as a fire where there should not be fire – if it’s safe to do so, turn off the gas at the supply line and then call the fire department.

Evacuate the house if you suspect a gas leak or if the fireplace is not operating correctly.

You can see the results of a home gas line explosion in the following video.

So as you can see, a gas fire is not something you should mess about with.

Get professionals on board if you ever suspect something wrong with your gas fireplace.

Put Out A Fireplace Fire FAQs 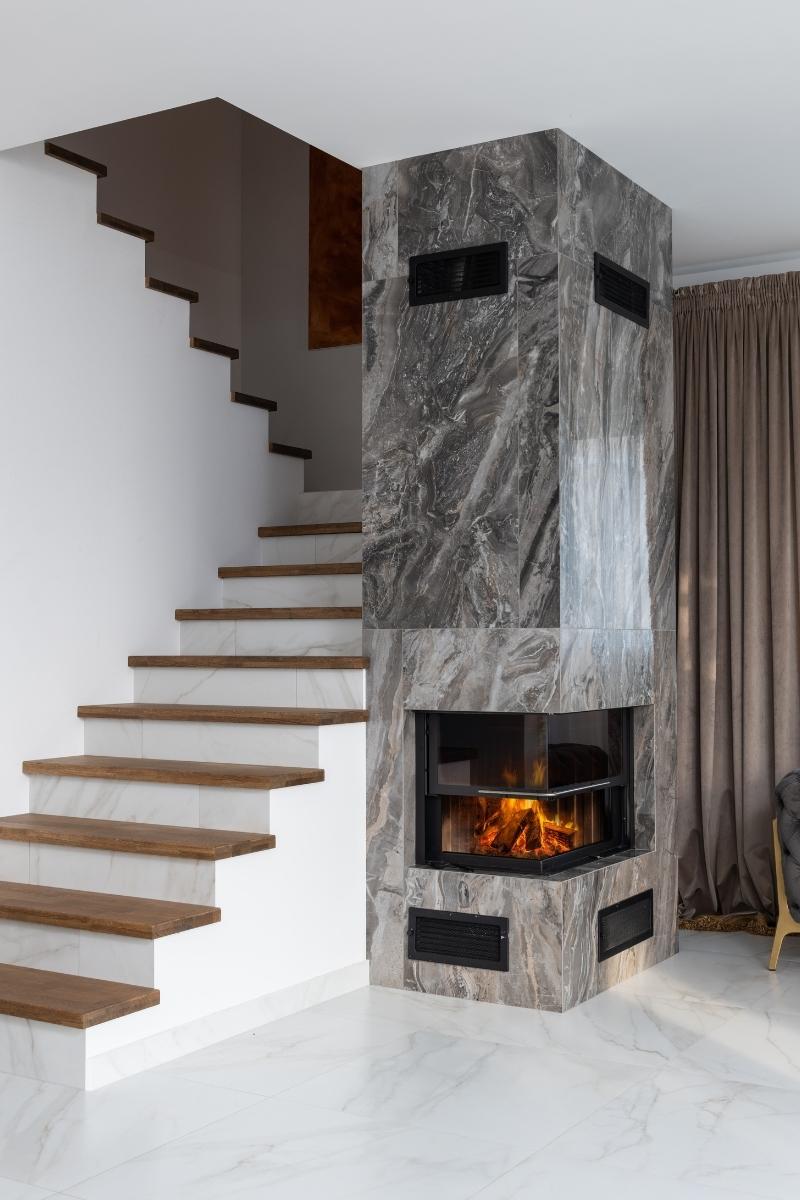 Can I pour water on my fireplace?

It’s best not to pour water into your fireplace.

It creates a mess and the water binds with ash creating a very hard-to-remove substance. Also, a wet fireplace will be difficult to light next time.

In an emergency, you can put water on a fireplace, but it’s going to create A LOT of smoke, steam, and other issues.

Can you leave a fireplace burning overnight?

Yes, if your fireplace was designed to be left burning overnight, it’s completely normal to do this.

However, if you have an open fireplace, it’s best to let it go out before going to bed. Even if you have a spark screen to cover the front, it’s still best not to leave it unsupervised.

How long does a fireplace fire last?

This varies depending on the fireplace and the type of wood you are burning.

Some fireplaces can keep burning for hours, while others – such as these tiny home wood stoves – may go out after only half an hour.

Softwoods burn much faster than hardwoods, the latter can still have hot embers after 8 hours.

When should I close my fireplace flue?

Once a fire is well established in a fireplace you can close the flue – this will stop the fire burning so hot and prevent wood from being consumed too quickly.

How To Put Out A Fireplace

Most people asking how to stop a fire in a fireplace are wondering about wood-burning fires.

It’s simply a case of cutting off the oxygen, removing fuel, and spreading out the remaining fuel so that it cools down faster.

Keeping your fireplace clean, such as with products like Quick N Brite Fireplace Cleaner, is one of the best ways you can keep your fireplace safe and working well.