Birch firewood is a hot-burning hardwood that is good to use in wood-burning stoves or other fireplaces.

I live in a place with a lot of birch trees, primarily white birch, so I use a lot of it for both my indoor and outdoor fireplaces. Even though white birch isn’t perfect for fires, it’s easy to cut, split, and dry, out it puts out a moderate amount of heat.

If you store the wood right, it is an excellent option for firewood, and its bark makes for a good natural firestarter.

Pros And Cons Of Birch Firewood

The short answer is yes.

When dry it’s a very clean-burning wood that puts out around 20.8 BTUs of heat per cord of wood. To put this into perspective, it’s not as good as oak which puts out up to 30.7 BTUs of heat (depending on the variety), but it’s far better than pine which only puts out 16.2 BTUs per cord.

If you have birch trees on your property, you will know that they are reasonably easy to drop (though prone to getting hung up in other trees in the stand) and really nice to deal with. The trees grow 30 – 40 feet tall, have a 5 – 10 inch diameter, and they don’t have many limbs/branches on them. In this way, they are perfect for firewood.

Birch is also easier to split than some of the other hardwood options because there are fewer branches creating knots. Another big benefit of this is that there is less mess left behind as well.

There are a few downsides to birch firewood. It can burn very fast, which means you have to add wood to the fire more frequently, and you go through more of it.

Also, if you don’t store it correctly, it is very susceptible to getting wet and molding. Unsplit logs left in the forest or on the wet ground will rot pretty quickly. 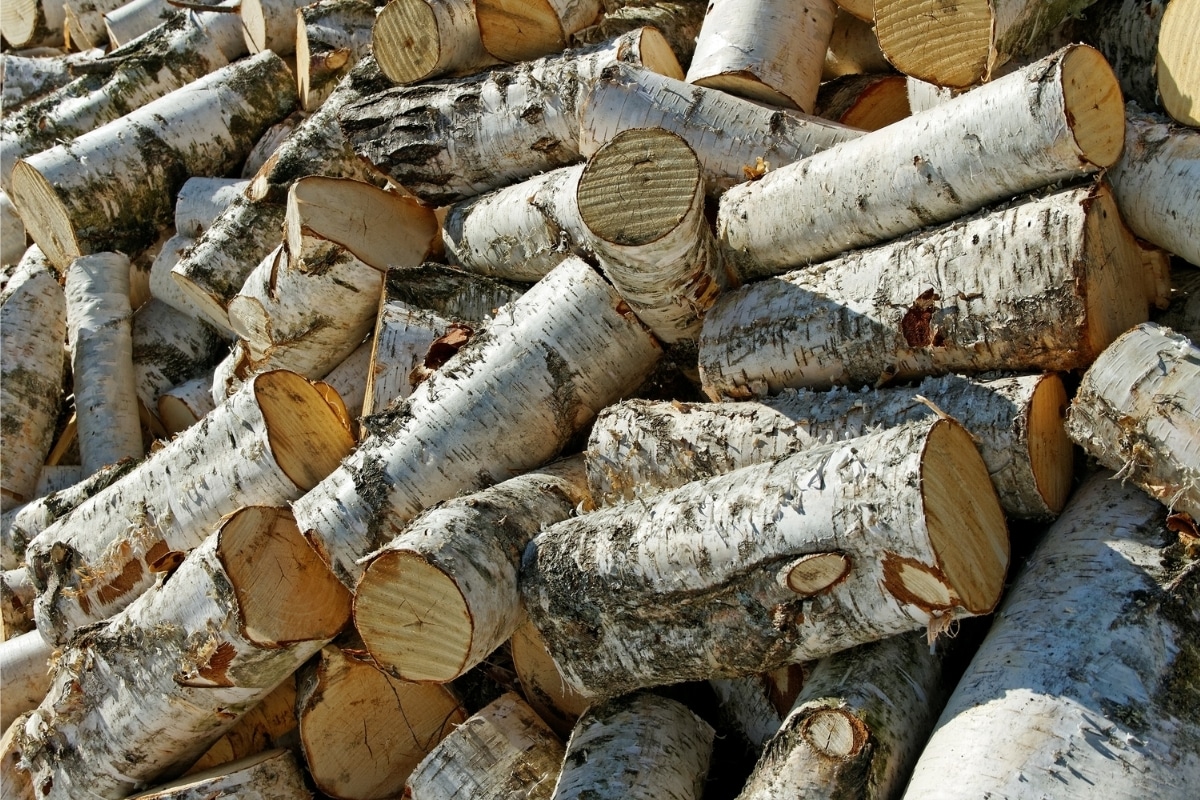 There are a few different choices for burning birch wood.

Some are more desirable for fires than others. No matter what type of birch you are using, it will work well in a fire, but getting the right birch will help you enjoy the whole experience more.

It offers some of the most strong smells while burning, but it is used more for landscaping than firewood.

You can find yellow birch firewood in the Appalachians, and it is sometimes called swamp birch.

It is one of the more challenging birch options to use due to the heavy amount of sap it creates. Yellow birch is harder to split, and it can be messier to use.

White birch firewood doesn’t burn as hot as the other birchwood options.

However, white birch wood lights very quickly, especially if you have the bark to start the fire. It also has a great smell which makes it great for use in outdoor fires like chimineas.

If you have your choice of birch firewood, black birch is the best to pick.

You get the highest heat and the sweetest smell when you use this wood. You find it in the eastern states.

Before going out and felling birch trees, it’s best to watch a few YouTube videos to see how they act when they drop.

They will often get caught up in other trees, so if you are inexperienced or unsure about what to do in that situation, best to call up a friend who does.

You generally do not need a chainsaw with a large bar on it when felling these small-diameter trees, a 16 – 20 inch bar would be fine. You might even get away with using a 14-inch bar if you needed to. A Husqvarna 345, for example, would be perfect if you had one. Or there’s nothing wrong with the Remington Outlaw in this situation.

Birch is relatively easy to split; it can be a little stringy, which may cause problems if you’re trying to make perfect clean cuts.

There are a few factors that make it more challenging to split. The older the birch tree, the more fibrous it will be. Also, if the birch was in the direct wind, it would be more rigid.

Birch also rots pretty quickly when left unattended. When you get a birch log, you want to split it as soon as possible. If you can’t, try to get it off the ground. If you let it sit too long, the wood may become useless.

Birch can make a lot of sap, but it isn’t as sticky as pine sap. In some places, people tap birch trees for syrup in the same way maple trees are tapped.

How long you have to season birch will vary depending on the type. Yellow birch will take at least a year to season, whereas black birch can be ready in six months.

As long as you split and season the birch right, it burns very clean. You won’t get a ton of sparks or smoke when you use it in a fire. It is a good wood to have when you don’t want to do a ton of cleaning.

The aroma of the wood is pleasant, and the heat output is nice, especially when compared to how easy it is to prepare. It will burn faster than some of the other hardwoods, but that could be a good thing depending on your activity. 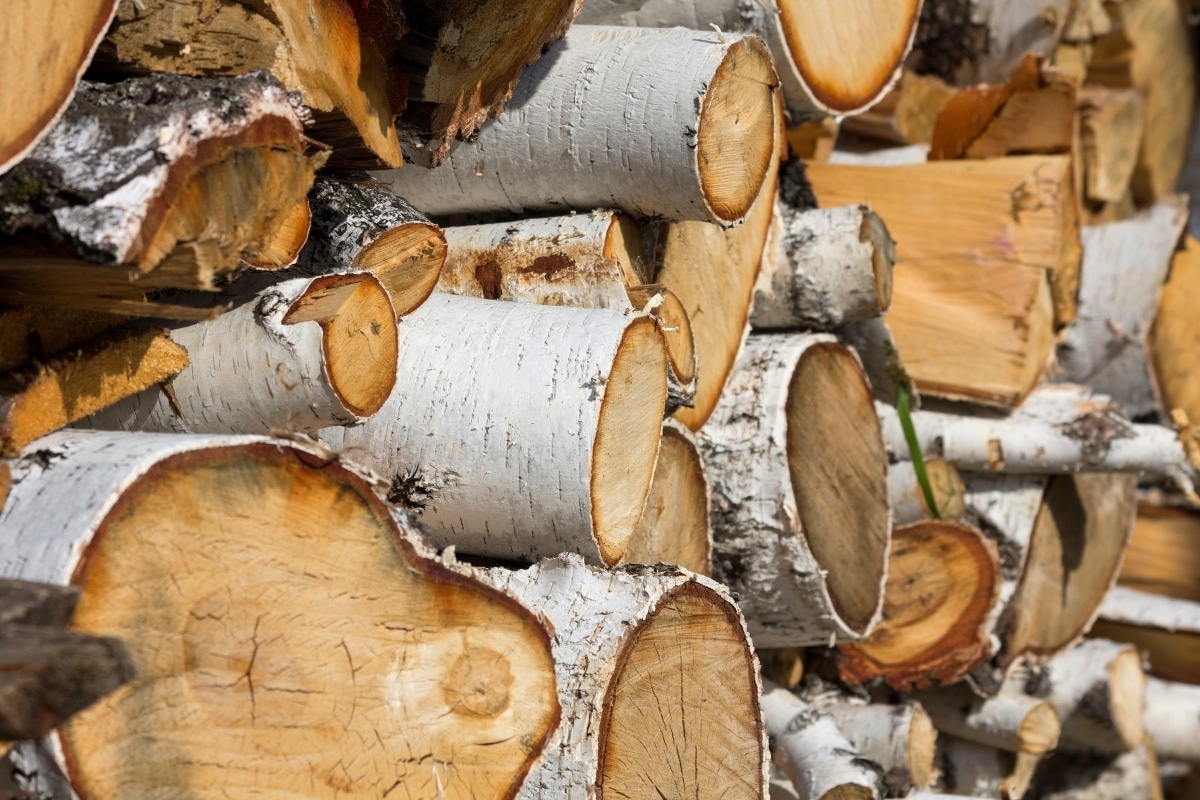 If you’re looking for something that will burn better than birch, there are a few options out there.

Should I Use Birch As a Firewood?

There are a lot of good reasons to use birch firewood.

If you are looking for a wood that smells great, burns relatively clean, and can heat your home or campsite, birch is ideal. It is also a versatile wood that you can add to almost any fire for a little extra heat production.

Fans of birch tend to use the type found closest to their home because it is best not to have to transport wood over great distances. It is an abundant wood that grows quickly, and you won’t be disappointed with your results.

Whether it’s for an indoor wood burner or something like a Sunjoy outdoor fireplace, birch as firewood is a good choice.

Chiminea Cooking For Beginners – All The Basics For Getting Started

Husqvarna 440 Chainsaw Review, Specs, Price: Is It A Good Chainsaw?