It has a chimney because not only is it a propane gas oven, but it can also be used with wood and charcoal.

The Ooni Karu pizza oven comes in two sizes—one can fit 12-inch pizzas, while the other can fit 16-inch pizzas.

Other than the size difference, these units are very similar to one another.

I’ll give a quick breakdown of what qualities they share, then discuss their differences.

With a multi-fuel system, the oven can use either hardwood chunks, charcoal, or a mix of both.

There’s even an attachment to the Karu that turns it into a gas-powered oven, although that product is sold separately.

If you do purchase the gas unit, you must take off the chimney.

By doing this, you allow the gas flames to heat up without it all going up the chimney.

Both the Karu 12 and 16 heat up to 950ºF within 15 minutes. Once at the proper temperature, cooking should only take a minute.

Both sizes of Karu pizza oven also include a chimney with a baffle, cordierite baking stones, and a fuel hatch.

The fuel hatch is one of the most interesting parts both ovens share – it is where you add more wood and/or charcoal when the oven is on. 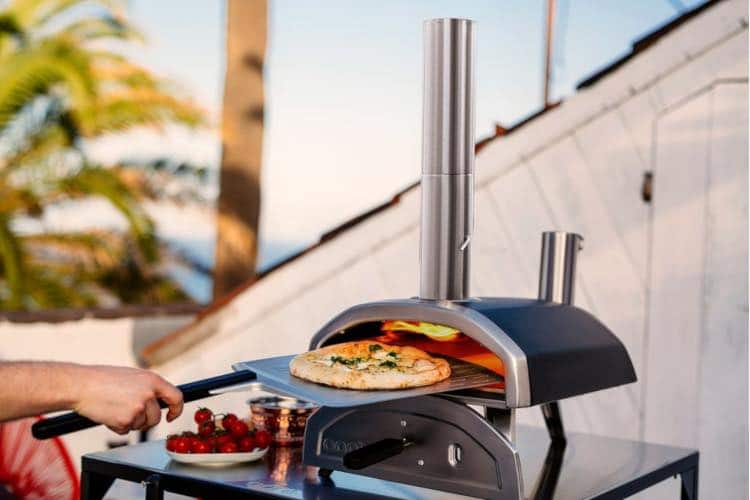 The hatch differs from a hopper (which is what the Ooni Fyra 12 has) in that a hopper uses gravity to release fuel at a constant pace.

In contrast, you must add the fuel directly to the flames through the fuel hatch with the Ooni Karu.

The other big difference between the Karu and Fyra is that you can use real wood with the Karu.

The Fyra is for use with wood pellets, so it’s a different thing altogether really.

Make sure you always wear protective equipment to avoid getting any burns.

The Karu 12 is the smaller, portable version of the Karu 16.

Weighing in at an assembled weight of 26.4 pounds, you can disassemble the Karu 12 for easy movement.

The chimney detaches, as does the oven door, and you can remove the cordierite stone from the cooking area.

After that, you should’ve shaved off enough weight that transporting the oven is a breeze.

The finish gives the oven a sleek, but not shiny look.

Watch out though, stainless steel is an excellent heat conductor, so the sides of the oven get extremely hot.

The Karu 12 does have a small downside.

When using charcoal or wood, it can be hard to regulate the temperature.

You have to use the baffle on the chimney to control airflow, which in part determines heating.

If you’re not paying attention, you’ll end up with burned pizza.

Who Should Buy The Karu 12 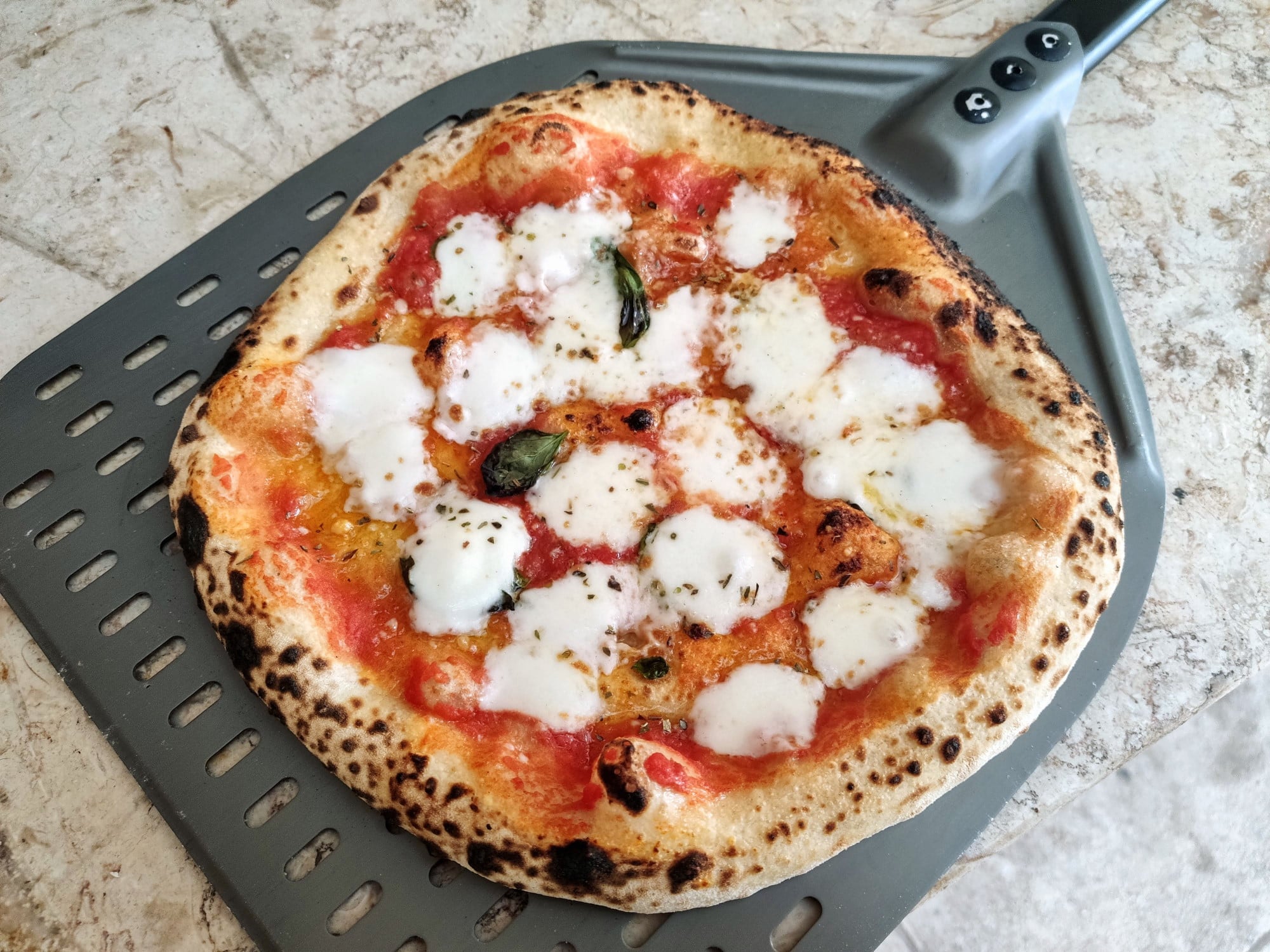 The Karu 12 is best for pizza makers who have experience, but that’s not a necessity.

Using charcoal or wood can take a while to get the hang of, but once you do, your pizza will have some unique flavors.

If you’re having too much trouble with those fuels, you can always buy the gas attachment.

The gas attachment will make cooking easier and more consistent, so it’s a good idea to buy one if you’re just learning how to cook pizza. 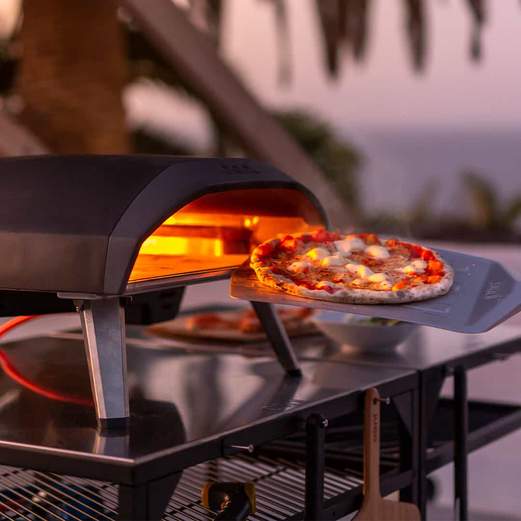 The Karu 16 weighs almost 63 pounds, so this unit isn’t portable.

You’ll find that the oven door and chimney add a lot of weight, but removing those pieces doesn’t make the oven any more portable.

Aside from its weight, the Karu 16 also has a few features the Karu 12 doesn’t have.

First, the Karu 16 comes with a digital thermometer attached to the front of the oven.

The thermometer displays the ambient temperature within the oven, allowing you to choose the best temperature for whatever you choose to cook.

The Karu 16 used different materials in its construction.

Instead of a stainless steel door, the Karu 16 door has a carbon steel frame with a large glass window.

The window allows you to see how your pizza’s cooking and how high the flames have gotten.

The body of the Karu 16 is carbon steel, while the chimney is stainless steel.

The Karu 16 has a component known as a “draft defender.”

The draft defender helps regulate how much air enters the back of the oven.

Not only does that help reduce drafts, but also gives you better control of the flames.

In my opinion, the Karu 16 has one major flaw—it uses two pieces of cordierite stone.

The small piece fits at the back of the oven, while the large piece sits at the front.

If you’re not careful, these pieces won’t be flush. If they’re not, it can cause uneven cooking times or even tears in your pizza dough.

Who Should Buy The Karu 16 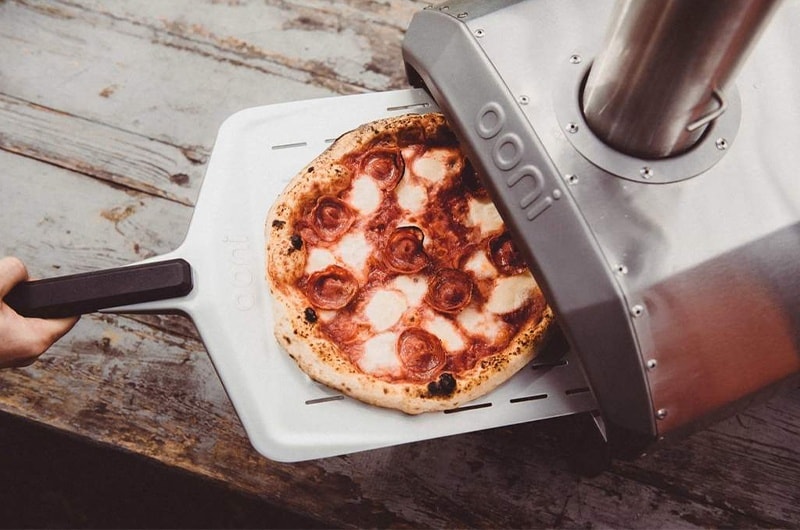 The Karu 16 may look intimidating, but all its added features help make it easy to use.

The digital thermometer allows you to know the ambient temperature of your oven at any given time.

The glass door also helps you see how large the flames are and how your pizza is cooking.

With both of these added features, cooking with wood or charcoal isn’t as hard as it is with the Karu 12.

So, even without the gas attachment, the Karu 16 is a fantastic pizza oven for beginners or masters alike.

The Karu 16 is best because of the additional features and capabilities we outlined above, but they’re both great pizza ovens.

They differ from the Ooni Koda Pizza Ovens in that they can be used with both gas and wood/charcoal – the Koda is only for propane.

The Karu is also one of the best-selling models and has many advantages over the Ooni Pro which is a slightly older model (that will probably receive an update itself soon).

Overall, the Karu is worth buying if you want to try out different cooking methods and cook delicious pizza quickly.

If you are an entertainer, the Karu 16 is the oven for you.

Check out the videos throughout this post that shows how to set up and use the Ooni Karu.

They have a ton of additional information that can help you decide which is the best Ooni Pizza Oven for your needs.

Ultimately, it comes down to the size you want coupled with your preferred type of fuel for cooking pizza.

The multi-fuel models are great if you’re not sure what you like exactly, or you just want to experiment with the different options.

Let us know if you have any questions in the comment section below.

A chiminea fire pit is another alternative to a pizza oven, but they can’t get to the same high temperatures as an Ooni.

What Does MS Mean On Stihl Chainsaws? Meaning Of MS, MSA, and MSE Designations