What happens or what should you do if you put chainsaw bar oil in the gas tank?

Thankfully, it’s not something I’ve ever done myself, and for many, it’s the result of loaning their saw to the neighbor or grandad. But accidents happen.

Unfortunately, it is worse than putting fuel in the bar oil tank and does require a more extensive cleaning process. However, you haven’t hurt your chainsaw – it’s going to be alright!

Accidentally putting chainsaw bar and chain oil into your fuel tank isn’t the end of the world – or the end of chainsaw either!

It’s actually very easy to fix and won’t ruin your engine, even if you ran the chainsaw and didn’t realize the mistake until it stopped.

Whether you were using regular bar oil or a substitute bar oil, you simply need to get the oil out of the fuel system.

The first and most obvious thing you need to do is empty the tank out.

Pour out as much of the oil as you can from the fuel tank.

You can probably still re-use this bar oil if it was put into an empty tank. If it was mixed with a bit of fuel left in the tank then throw it out.

Because bar oil is very tacky there will be a lot of oil residue left in the tank.

Rinse out the tank with your regular fuel-oil mix, or even just use straight fuel.

Fill the fuel tank halfway and then give it a good shake to help the fuel grab the oil from the sides of the tank. Then dispose of this fuel.

Repeat at least twice, and do three times for good measure (this can hurt given the price of fuel)!

3. Clean Or Change The Fuel Filter

Pull the fuel filter out of the gas tank and give it a clean with fresh fuel or carb spray.

This is the cylindrical thing attached to a line in your chainsaw.

If you have compressed air, give it a burst with that as well.

Once clean, you can try and blow through it to check if the oil has been removed from the filter.

Whatever you do, make sure all of the oil is removed. If you use warm/hot water, make sure the filter is completely dry before going back in.

It would be better to change the filter completely if you have one on hand or don’t mind going to the store or ordering one online.

If you didn’t run the saw with the bar oil in the fuel tank, you probably won’t need to worry about cleaning the fuel line.

However, if you did, spray a couple of shots of carb cleaner down the fuel line as well.

This helps to remove the chain oil from the line.

Remove the top of your chainsaw and the air filter in order to access the carb intake.

If you used the saw with bar oil in the gas tank, the cylinder will be full of oil.

Put a few drops of oil into the intake.

If this is unfamiliar to you, watch the YouTube video above as this is a much easier way to understand the step.

You should now be able to start the chainsaw.

It will likely start and stop at first, while it’s cleaning the oil from the carb. Also, it will blow white smoke (as shown in the video above), which is normal.

Keep starting it and letting it run until the engine clears itself of the wrong oil.

Once the saw is running again, replace the air filter and casing.

You don’t want to run it too long without these, just until it’s cleared the bar oil from the fuel system. 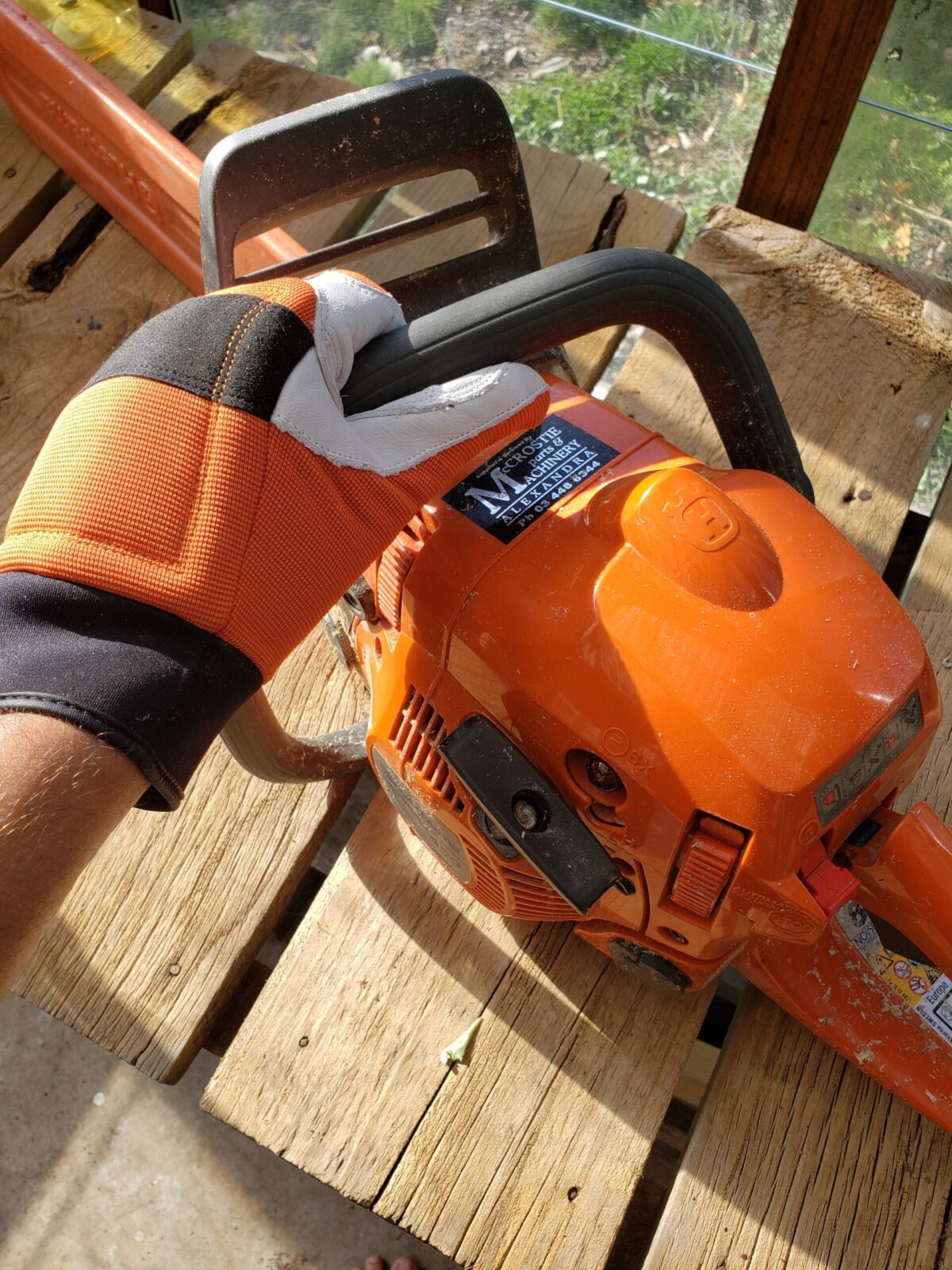 That’s all there is to it.

You shouldn’t need to pull the saw apart to clean the carb or anything like that.

Simply removing and cleaning the oil from the fuel filter and fuel line should be enough to get it going again.

And while you’re working on the saw, why not clean the air filter at the same time?

Of course, every chainsaw is different, so if in doubt take it to your local small engine repair shop for them to sort out.

Fuel In The Bar And Chain Oil Tank: The Easy ONE STEP Fix!